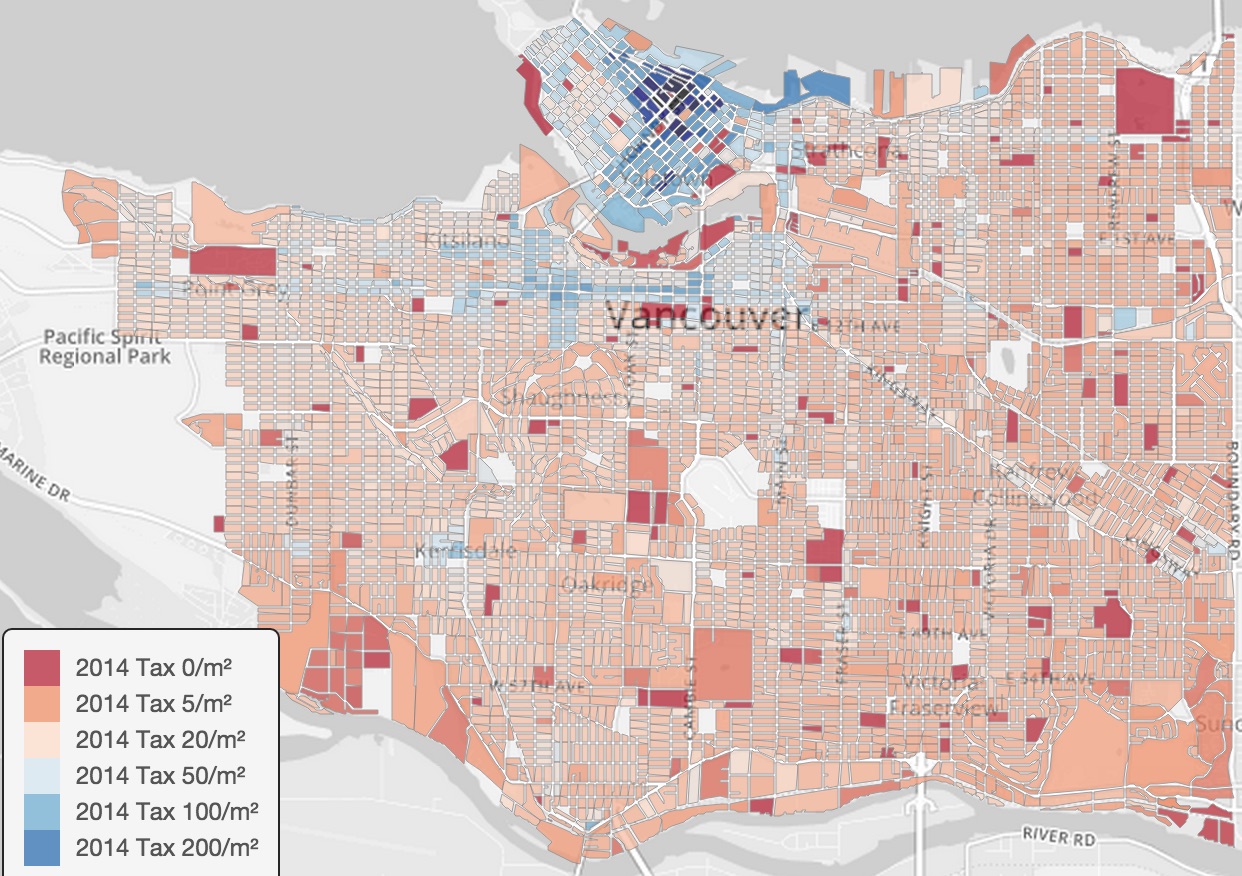 The other day I saw that Downtown brings in 23% of CoV tax revenue but only makes up 5% of the city area. Intrigued by that I decided to add a ‘Tax Density’ layer to my Vancouver Assessment Map. The idea was to try and understand the tax revenue generated by different areas in Vancouver. The data is already available in the CoV open data property dataset so it would only take half an hour to ad it to my map.

That also points to one possible way to break some of the resistance to density increases that Vancouver currently sees. If a neighbourhood (or smaller region) accepts density increases, maybe some of the associated benefits of lower property taxes should be applied locally instead of everything being spread out over the entire city.

So what exactly does the Tax Density layer show?

The Tax Density I mapped is simply the amount of taxes collected per m². Under that measure, Downtown comes out at $127.1/m², followed by the West End at $72.7/m² and Fairview at $42.7/m². The Vancouver average is $20/m², only 6 of the 23 neighbourhoods have an above-average Tax Density. A complete list of Tax Density by neighbourhood is at the bottom.

For this calculation I did not count the parks doward the area of the neighbourhoods, but school for example are included. In light of this some of the aggregated data should be viewed with caution.

I also thought about mapping the density of housing units, but sadly the data in the CoV open data catalogue is ill-suited to do this. I can easily extract the number of tax entities and map the density of these. This works great for a traditional single family home (one tax entity) and for stratas (one tax entity per unit), but it becomes a problem because e.g. laneway houses and granny suites don’t show up as separate tax entities. And it gets really bad with rental apartments, where the whole building will be a single tax entity with potentially a very large number of units. And then the dataset does not distinguish between commercial and residential units. That data could be reverse engineered from the tax data, but that’s more work than my usual half hour tolerance level for this kind of side project.

Another option is to use census data and merge the datasets. But that gets messy, the aggregation levels don’t match and this is well beyond a side project time frame.

Long story hort, if you are interested in browsing Vancouver by tax revenue collected per square meter, click through to the Vancouver Assessment Map and select the Tax Density layer.