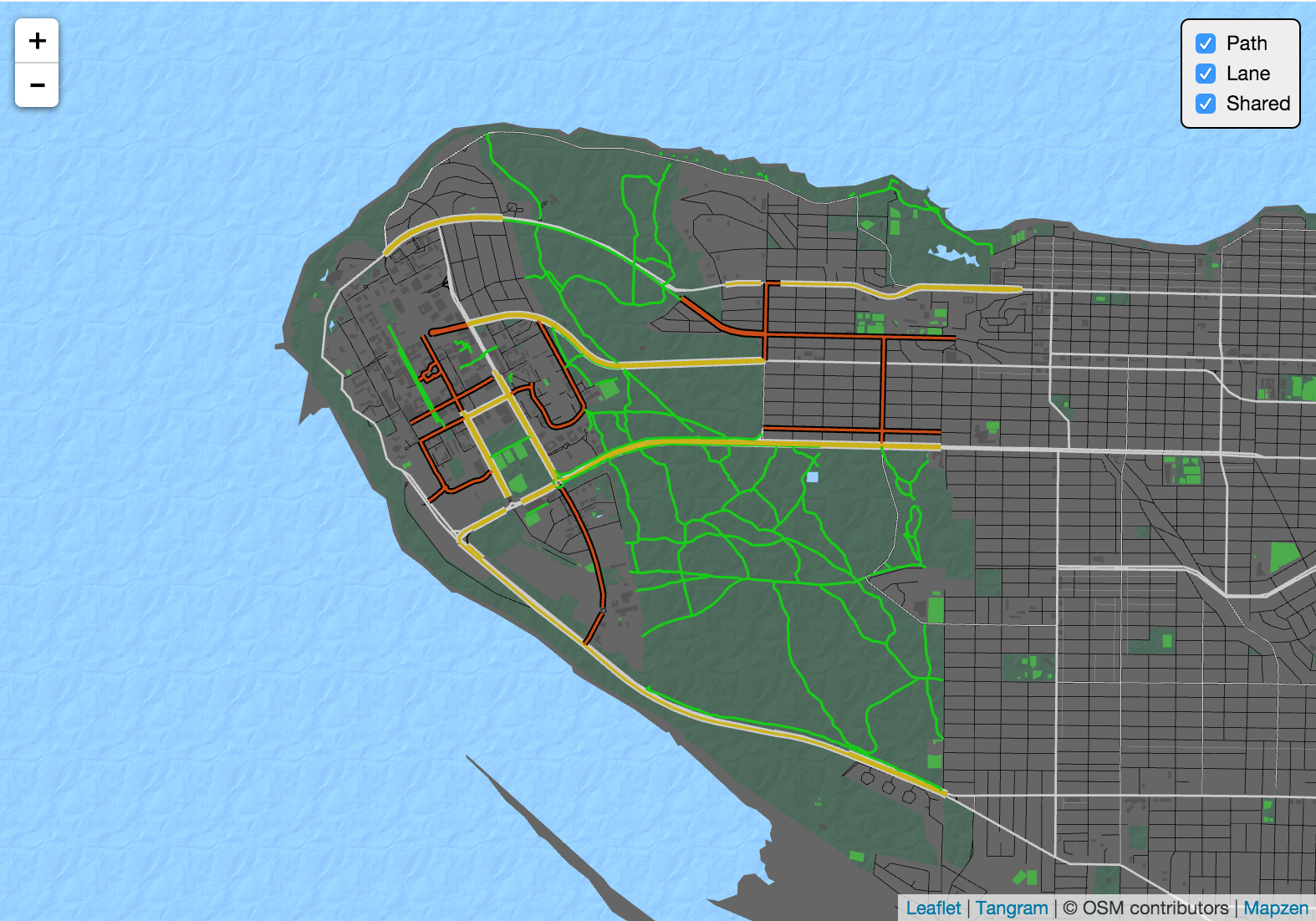 Here come some general thoughts on bike maps. Not throught through yet, just jotting down some ideas so that I don’t forget and maybe to start a discussion.

Why make a new bike map?

Plainly put, I don’t like a lot of the bike maps out there. Time for my little bike map rant:

How to make a new bike map?

First let’s start with examples of how other have tried to solve these problems. Probably one of the best maps out there is the Capital Regional District Bike Map. I chatted with Corey who worked for CRD on these maps on how it was done. They collected all the bike infrastructure in the region by contacting all the municipalities. 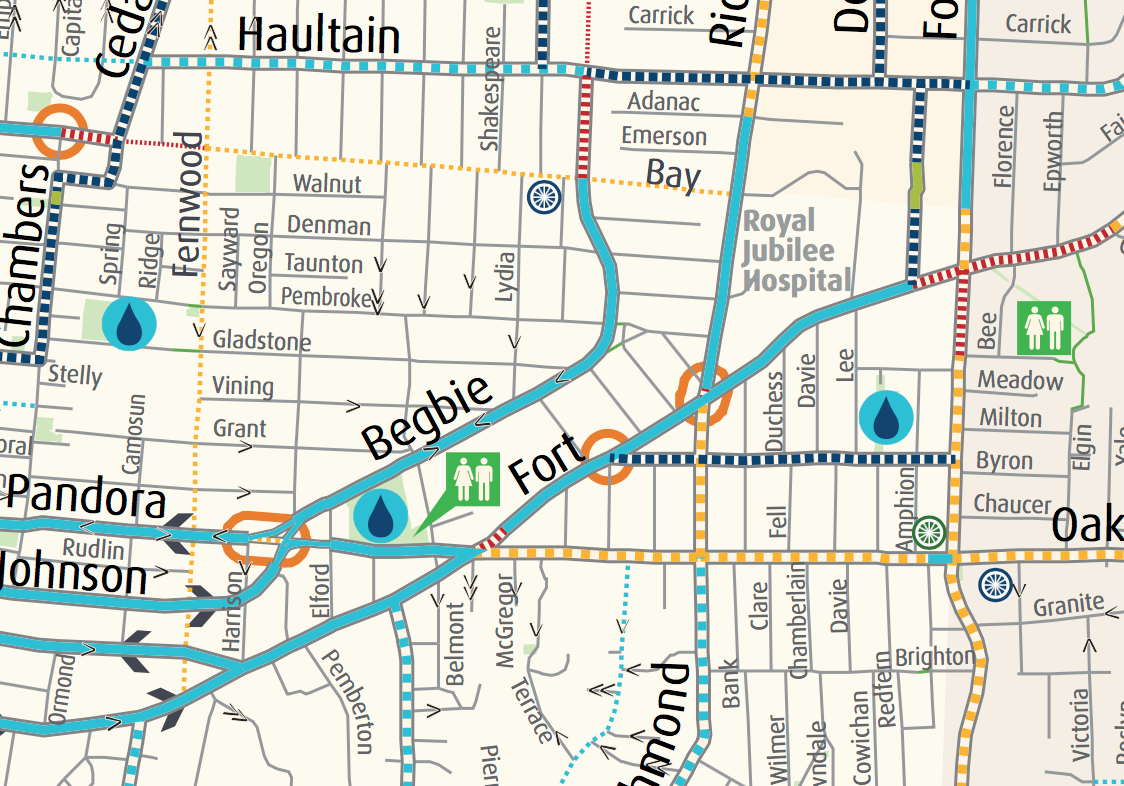 Then they meticulously checked that what the municipalities reported actually existed on the ground. Consider Fort road on their bike map where they accurately show the bike lane cutting out. And they added in shortcuts and connections that the municipalities did not report on, like a short section of footway that may technically require walking the bike but shortcuts out of a suburban cul-de-sac maze.

Next the CRD map does not only map infrastructure, but color-codes it to show cycling comfort. 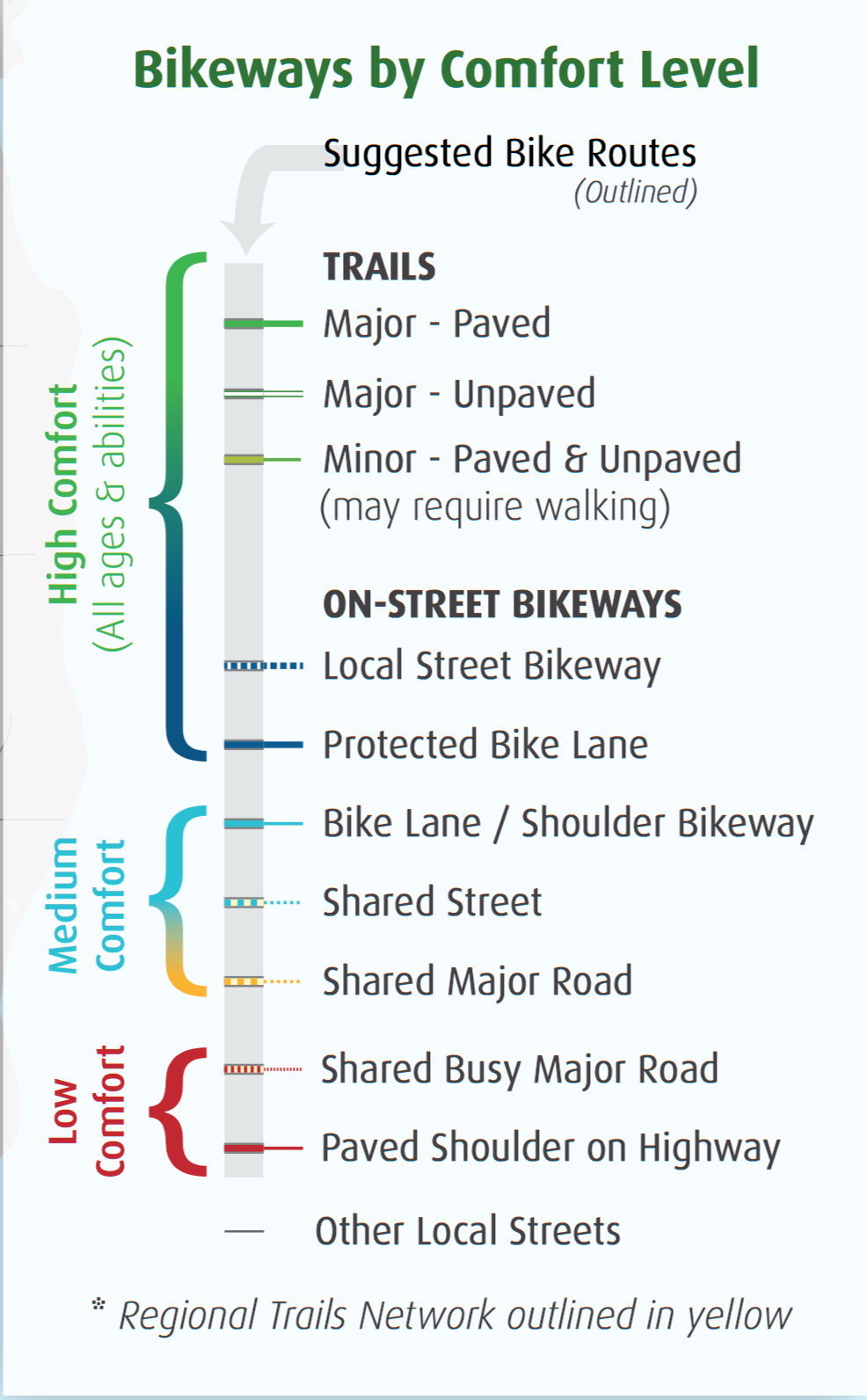 This gives me a good idea how comfortable the rider will feel. Unfortunately all that complexity starts to make it difficult to read the bike map.

That’s where technology could come to the rescure. The CRD map is a PDF map and suffers the usual limitations that come with it. The map cannot adapt to the needs of the reader. So how about moving the map online and letting the user decide how to display it?

Bike maps that adapt to the user

The Washington Post Wonkblog had an excellent feature mapping only the bike infrastructure, nothing else. And for good measure, they removed the shared streets bike infrastructure. The rational was that in most cases, comfort level on shared street bike routes is really no different from cycling on a parallel road. Inspired by that I decided map Vancouver and a couple of other cities and I added in some button to allow selectively turning on or off typed of infrastructure.

That's getting one step closer to adaptable bike maps, but it is still missing the main point that as a cyclist I am most interested in comfort level, and infrastructure type is only a proxy for that. And a poor one in many cases.

Not convinced we need a new bike map? Let’s draw on some local (for me) maps that inspired this effort.

UBC Campus Planning keeps tweeting out a bike map that lists several dangerous roads as “designated on street cycling routes”, including an unlit divided 4 lane highway with a posted speed limit of 60km/h and typical traffic speeds significantly exceeding that. And all of that apparently aimed at people that don’t cycle to campus yet but are considering doing so.

TransLink just updated their bike map and marks said highway as “recommended by cyclists”. The do acknowlege that the road “does not have special treatment for cyclists”. So why include it on the map? Filling in the the gaps in the cycling network should happen in real life, not just on the map.

Even HUB keeps marking Wesbrook Mall north of Agronomy as “existing cycling route” when in real life it is everything but that.

How to make a bike map

So how should we make a bike map? I was always thinking about setting up my own database and somehow adding and rating infrastructure. Then Alex decided to start making a bike map for the UBC area. And he chose the most straight-forward path: Editing Open Street Map data. That way the edits are immediately (better: after their map tile refresh cycle) available online, for example on OpenCycleMaps. The map is easily accessible on the go, it zooms and scrolls. It is missing a ‘locate me’ button (which is easy to fix). The look and feel is a little dated. But most importantly, it does not adapt to the user’s needs. I can’t ask it to display the “dad’s version” of the cycle network, showing me only pieces that I will be comfortable cycling with my 6 year old.

Technology has moved along since that map was built. A very easy way to solve these issues is to utilized the awesome tools built by the folks at Mapzen. Their tangram mapping engine taps into their OSM vector tile service to make flexible mapping of bike data a breeze. And to top things off, they offer very easy to use and extremely powerful ways to style the map. Only problem: Mapzen’s OSM extracts don’t have cycling information. Not a big problem though, we can just pull them out separately and add them on by hand. Here is an example where only the bike routes near UBC are added.

One small drawback is that WebGL, the technology Tangram is based on, is not available for much of the windows world. WebGL requires modern browsers (IE9 does not count) and also modern hardware/graphics card drivers. A couple of years old windows machine will likely not be able to render WebGL no matter what browser you use. But the main target is mobile, and iOS and most android won’t have a problem with WebGL. If really needed, could add a fallback or use older and web technology to make the map, but Mapzen’s Tangram makes it so ridiculously easy to make and style nice maps…

The main problem left to solve

One major problem left. OSM does not have and “cycling comfort” tags right now. There are tags for physical infrastructure, and in some cases the comfort level can be correctly inferred from those. But in many cases it can’t.

There are two ways around that. One could keep those tags in a separate file, but that becomes difficult to maintain when OSM features change. Or one can add the tag to the OSM data. That way better bike maps can scale easily, and the information can also be used in OSM-based routing services where their real value lies.

Not sure which is the way to go here, a similar tag has been proposed before but apparently did not go anywhere. Looking at the tag guidelines the fact they these new tags are very useful for routing seems to speak for adding them to OSM, but the fact that they are measuring something explicitly non-geographic by going beyond the already existing physical infrastructure markers might mean they are better kept in an external database. Will have to think this over, feedback appreciated.

Where to go from here.

The logical next step is to add routing. Again, Mapzen’s flexible routing service seems to be a natural match. Also, adding editing capabilities right onto the map would be quite useful. The bike map is where data issues are best seen, and saving the step to head over to OSM to fix it (after creating an account) and then waiting for the data to update on the map seems like a workflow that will discourage wide participation.

We follow up by exploring routing and data quality.