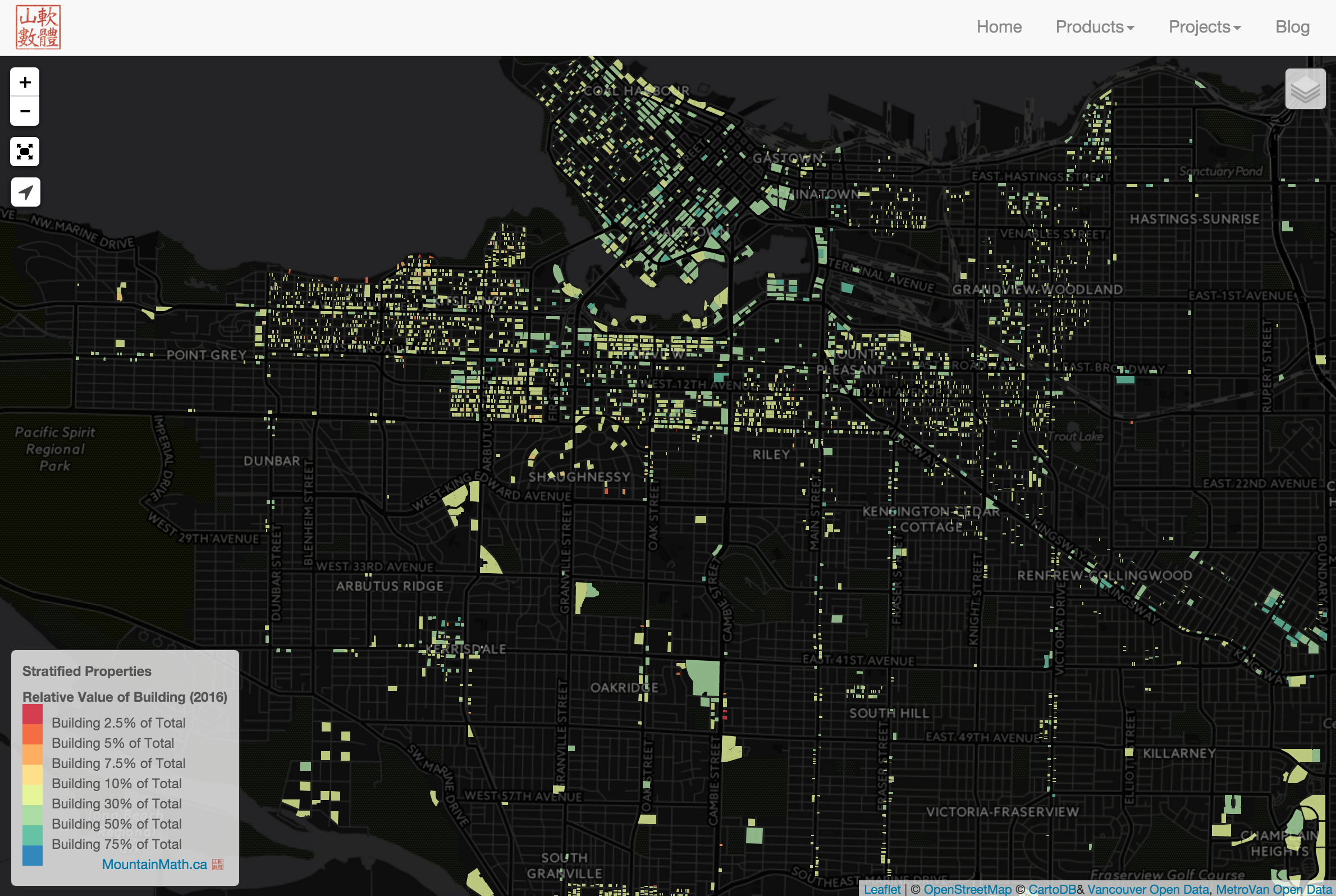 But all of these maps have a clear bias toward the more expensive homes. Everyone knows by now where the most expensive properties are. But where are the more affordable ones?

Before continuing and getting disappointed at the end, we want to highlight the huge limitations when looking for affordable homes. There is no freely available data on the floor area or number of bedrooms for each dwelling unit. Next to the price and location (which we have), these are the most important features of a dwelling. And this limits the usefulness of all that follows.

Why continue? It gives a glimpse of what kind of analysis could be done if the information would be freely available.

The Elephant in the Room

In principle all this information is available, BCAssessment has all this data. And they even make it available on their (quite nice) eValue website. But their terms of use prevent us and others from using this information. Most of the information used in the analysis here originates from BCAssessment, but it comes via the City of Vancouver that has made the data available through their open data portal.

As I understand it, the main reason why this data is not freely available is that BCAssessment is charged to recover their own operating cost. So they hold onto their data and try to sell it for cost recovery. In the process of which they harm the ability of municipalities to plan properly and the public to get a clear idea where things are at and have a fact-based discussion on how to move forward. Which creates large amounts of friction and may lead to social and economic damages far exceeding any revenue collected by BCAssessment.

Personally, I don’t believe that holding back data is a smart way to run a government. You might want to ask BCAssessment to #giveUsData.

For now, let’s put the data that we do have to the best use and see what we can tease out.

Locating the Most Affordable Dwellings

Stating the obvious, the most affordable homes aren’t “single detached”, they are condos. And condos have been largely absent from the affordability debate, although they make up the majority of owned dwelling units in the City of Vancouver.

Let’s start off with a map of the roughly 4,500 stratified residential or mixed use properties in Vancouver housing a total of about 10,2000 strata units. The exact numbers are hard to pin down. (#giveUsData)

Number of strata units by size of strata

We immediately notice the 4,152 strata units in stratas with exactly 2 units usually referred to as “duplexes”. There are a lot of strata units are in stratas of size between 20 and 50, but otherwise the units are fairly well distributed over different building sizes. At the high end there are fewer buildings, but each with lots of units. So there our graph becomes a little jerky and heavily depends on the cutoffs we choose.

To get a basic idea on how much these units cost we plot the number of strata units by price bracket.

Number of strata units by price

The distribution looks largely as one would expect. It peaks between the $400k and $500k mark, with a median value of $482,000. But there are a couple of things that jump out. Firstly, there are suspiciously many condos below $100k, more than half of which (445 to be precise), are less than $50k. There are places where one could by a condo for that price, but not in Vancouver. These are stratified parking spaces or other amenity spaces.

Next let’s focus in on the 8,313 duplex and multi-plex units with 8 or fewer units (in 2,995 buildings) and plot these separately.

Number of multiplex units by price

We see that the price distribution for multiplex units peaks at a higher price between $800k and $900k, but the overall numbers are quite small when compared to all strata units.

Let’s try to understand where the “affordable” housing stock is, which we take to be units below $500k, or roughly the bottom half of the distribution. We would like to map the properties containing housing units for each of our price brackets, but this gets tricky since the dataset does not hold information which units are parking spaces and which are commercial.

We need to take care of the problem with needing to distinguish parking spaces from housing units. And from commercial units. (#giveUsData) So we are left with using proxies, so let’s set a cutoff price so that most units below are parking stalls and most units above are (residential) units.

Generally, parking spaces should not cost more than $50,000 which is roughly the cost to build underground parking. Around $40,000 if it’s only one level, getting up to $75,000 (or sometimes even more) when having to go down deeper or water becomes an issue. The fact that some spaces go for significantly less is the result of mandatory parking minimums. Some parking spaces may be worth more than $100,000 as some people are willing to pay a premium for a convenient spot. That may mean a spot next to the elevator by the exit ramp, or simply a parking spot in a specific building that is under supplied and trekking across the street to a spot somewhere else is inconvenient enough. Or some stratified parking spaces might consist of several parking spots. 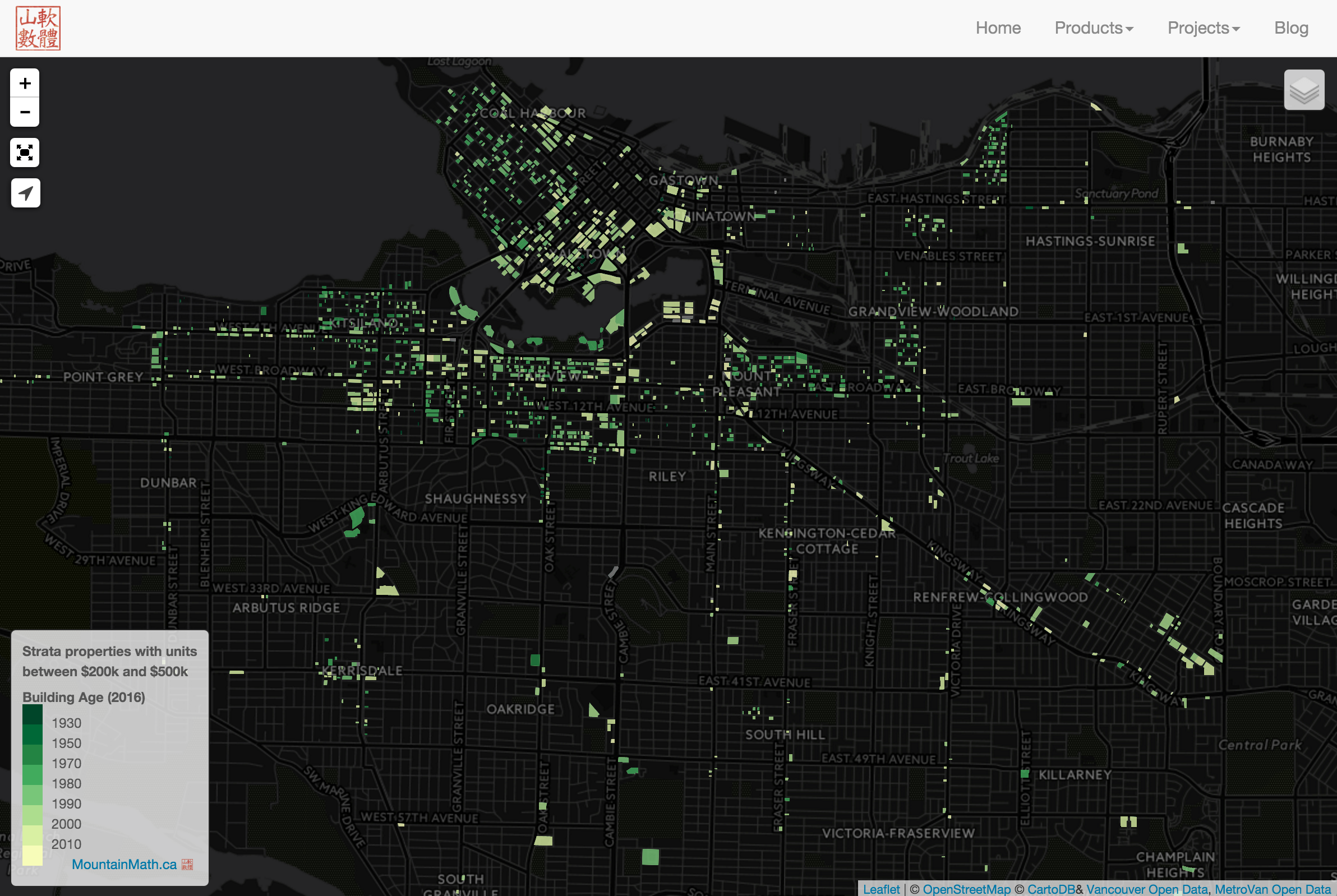 Since it is impossible to pick out the housing units out of all the strata units, all we can do is map all strata units, understanding that those below $50k are most likely parking spaces, those between $50k and $100k could be parking or housing (or commercial) and the majority of units above $100k are housing.

And we can’t actually map the individual units, only the buildings that house the units. Here are maps of the buildings housing the units in each of the lower brackets.

Clickin into a particular building and hitting the “more” button will pull up (a slightly cleaned) tax roster where you can get more information on the units. And if you are really interested in finding out more about a particular one you can always head on over to BCAssessment’s eValue website to look up more of those details that BCAssessment keeps in public view but locked off from systematic public scrutiny. (#giveUsData)

The built quality of strata units is generally higher, dollar for dollar, than that of single family homes. This should not come as a surprise as land is very expensive and stata units tend to use land more efficiently. There are only 27 residential or mixed use strata buildings that classify as teardowns, with a teardown coefficient below 5%. And 25 of these are duplexes, one is a 3-plex and one an 8-plex. There are no condos buildings with more than 8 units that fit our most restrictive definition of teardown.

Next we explore what kind of buildings the affordable units are in by graphing the number of units in several price ranges per size of the strata building it is in.

It looks like buildings with 20 to 60 units are quite good at producing affordable units. Partially that’s due to their abundance, but graphing the percentage of units in each price bracket confirms that these buildings tend to produce a nice mixture of low and high value condos. But larger condo buildings can also achieve this, although the actual performance of what has been built is mixed. Other factors, for example building age, are likely also at play here.

To see what the distribution of strata units by age is, we use the same price cutoffs and sort the strata units into age brackets. Since we are mostly interested in the more affordable units we sort out units in buildings with 4 or fewer units. These units might skew some of the age brackets.

To highlight the proportional makeup we again and graph this again as percentages.

If you read this far you probably agree that this exercise was mostly a waste of time. Hopefully you are earger to see this analysis split up by number of bedrooms and floor area. If you are all riled up at the lack of data and BCAssessment not giving out this information with a clean open data license you might want to drop them a line and ask for at least the information they publish eValue to be made available with an #openData license!

I am still hopeful that this might happen some day, and we can get a much better picture of the buildings in BC cities and check how they perform in fulfilling the needs of the community. And learn from that to make informed policy choices.