The news media has an extraordinarily difficult time with income data. And that’s only partially the media’s fault. In general, income data is a funny beast. So I decided to give a quick overview over income data that’s available through Statistics Canada. To make things a little more concrete I focused on Vancouver as an example, but everything applies equally well to any other area in Canada.

Most journalists I talked to care about accurate and relevant statements. If that’s you, you will need to keep reading and dive down the slightly wonkish income rabbit hole.

For those that don’t really care, I made a quotable random income generator. Just hit the “generate” button copy & paste the result and link this post as source. (Use at own risk!)

income is
Click to Generate Random Income Numbers
The income numbers don't fit the story? No problem, just play again until you get something you like!

The first thing to do when quoting income numbers of any sort is to decide what region to use. Seems straight forward enough, but in reality hardly ever done. In the Vancouver context, it simply comes down to deciding if one wants to report on income for the City of Vancouver or Metro Vancouver. Both are frequently referred to as just “Vancouver”. Which is just fine as long as it is clear from the context which region we are talking about. And more importantly, whatever the income is compared to (e.g. housing price data) are taken for the same region.

Next we have to choose a base demographic we are interested in, choose which income distribution is relevant for our context. In some cases this choice is obvious. If we are writing a story on lone parents in the City of Vancouver, we would want to look at the income distribution of lone parent households. If we are looking at the development of wages, we should consider individual incomes. For a story on consumer spending we may want to look at after-tax income.

We may also be interested in specific type of income, for example only in investment income. Or the net capital gains and losses. Or pension benefits. Or self-employment income.

Often we would like to distill everything down to a single number. Typically we would choose the average or median income from the distribution we are interested in, but we may also choose other statistics, for example the top quintile. Which one we choose really depends on the story. As a rule of thumb, choose median incomes if you are interested in the ‘typical’ person or household. Choose average income if you are interested in the questions relating to the total amount of money earned in a given area. Income quantiles are great to focus in on certain subgroups of the population.

Generally we also have to consider the availability of information. The census has very detailed income data in their standard release that allow us to be very specific about what kind of incomes we are interested in. And if that’s not enough we can make a special request to StatsCan to narrow the incomes down to a group we are interested in, for example incomes of renter households as was done in the rental housing index.

Annual income data is available from CANSIM (Statistics Canada’s socioeconomic database), but the geography is coarser than in the census. Generally we can only expect to get annual data for the whole country, provinces, census metropolitan areas, but not census subdivisions (municipalities) or finer geographies.

All income data eventually come down to CRA taxfiler data. But the devil is in the details. For the 2006 and 2011 censuses, there was a mixture between self-reporting and cross-referencing of individual level income data with CRA data. And even self-reported data would again undergo quality control and get somewhat adjusted according to CRA data.

But there are important differences in the data, both on what kind of income is included and also what people are included.

The details are endless, many of them won’t matter. Here are a couple to look out for:

So even when comparing CANSIM income data to census income data for the appropriate year we should expect some differences. Or comparing 2006 to 2011 income, even if hypothetically an area had identical tax returns, we would still see differences. Generally speaking, CANSIM average and median income estimates are lower than census estimates as it includes a larger pool of people that are likely to have lower income.

Where to get the goods? 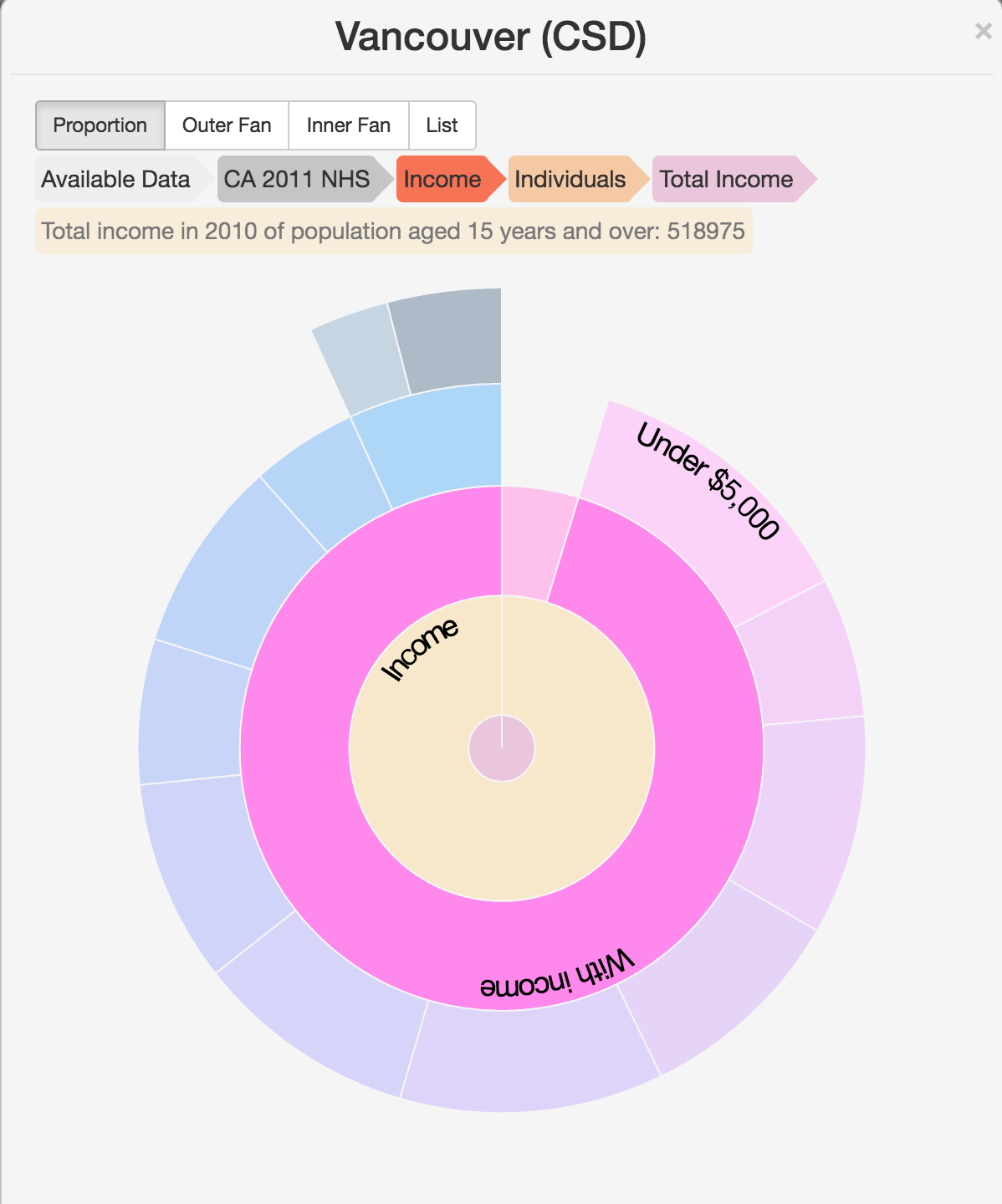 The latest census income numbers are available via [Statistics Canada](https://www12.statcan.gc.ca/nhs-enm/2011/dp-pd/prof/index.cfm). I am biased and prefer the [CensusMapper](https://censusmapper.ca/maps/467) interface. For 2011 data, choose any 2011 CensusMapper map, select the geographic region you are interested in and press the "more" button on the popup to bring up the "census wheel". Then drill into the "income" section, the last NHS variable in the widget.

CANSIM has annual data based on taxfiler information for coarser geographies. So you won’t be able to get data for the City of Vancouver or neighbourhoods within the city like with census data, but you can get data for Metro Vancouver. And you can get it for more recent years. Things get complex very fast there are 213 CANSIM tables with income data

Want to see how this works on an example? Just read the next post on using income data for housing affordability.