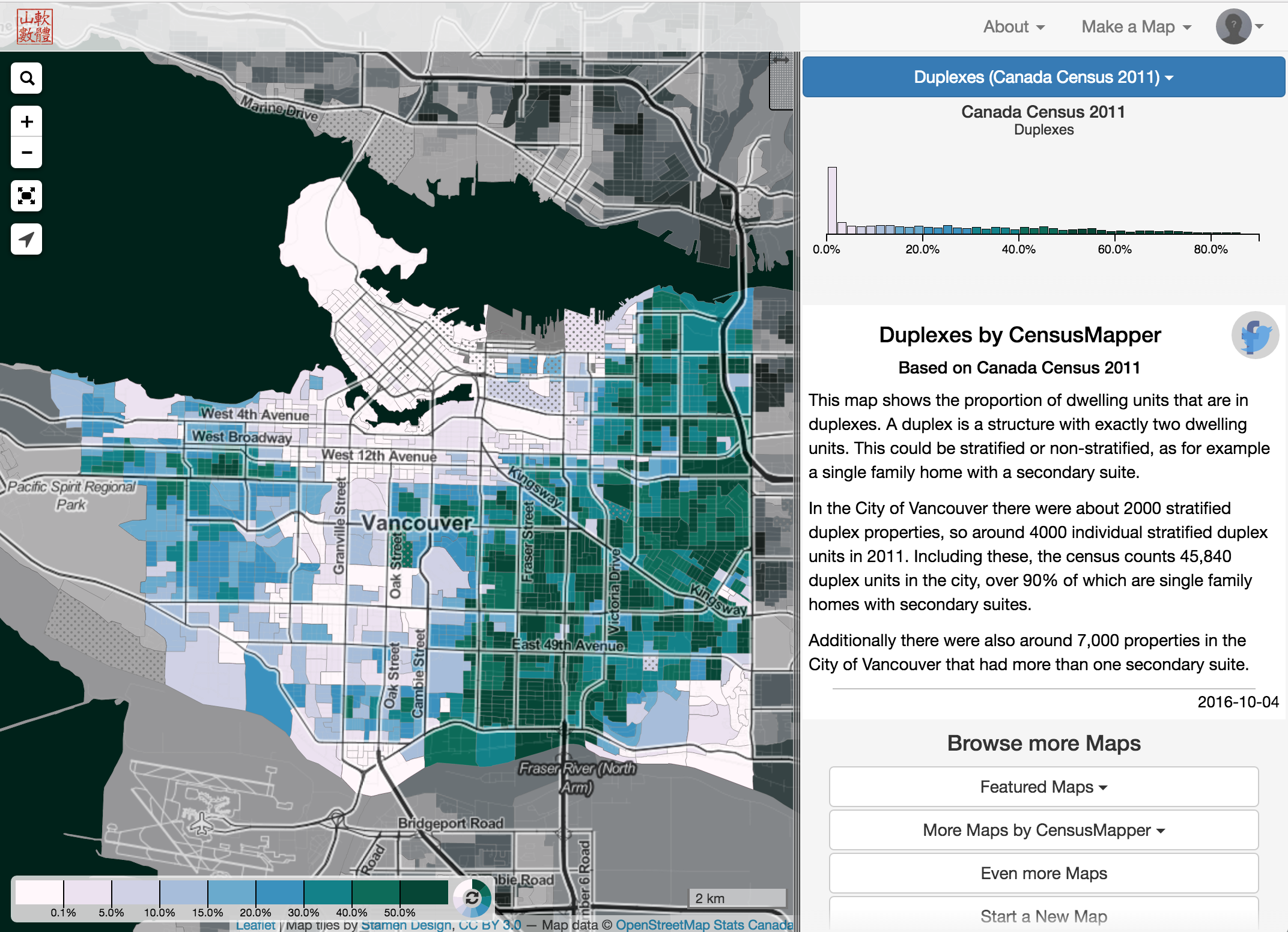 How many secondary suites are out there? Nobody really knows, but we have some estimates. Comparing single family properties from the assessment roll to census counts provides one estimate. This is likely a lower bound as the census is prone to undercount suites. Using this method, we arrive at a lower bound of 30,000 single family properties with a suite in 2011, up from about 27000 in 2006. The above map gives a rough idea of their location, although it also includes the roughly 2000 stratified duplex properties.

In total that adds up to an estimated around 37,000 suites in the city of Vancouver in 2011. Probably more in the recent 5 years, maybe fewer in the years between 2006 and 2011. Most of these will be operated as suites, with the main unit serving as a principal residence of the property owner. But this also includes investment properties where each unit, including the main unit in the house, are rented out.

For this post we will focus entirely on the suites. We might expand on this analysis at some later point and separate out owner-occupied homes from investment properties. Moreover we will use the more conservative estimate of 30,000 suites. Feel free to adjust that estimate in the interactive at the bottom see how this effects the estimates we make.

Estimating the average suite rental income at $1,000, claiming $200 in deductions leaves us with $800 or $9,600 in monthly taxable income. With single family homeowners generally above the median income we use a marginal tax rate of 35% to estimate $3,360 of taxes per secondary suite, so cumulative $100,800,000 in income taxes payed on secondary suite rental income in the City of Vancouver.

Similarly, when a homeowner deactivate a suite and absorbes it into their main residence that would trigger another “deemed disposition (and reacquisition) thereof at fair market value”. Which then would trigger a “taxable capital gain attributable to the period of use of such portion of the property for income–producing purposes”, just like it would at a sale of the property.

In the case when the homeowner rents out their entire home and later moves back in again, the homeowner can, under certain circumstances, make an election that he can maintain the primary residence status for most recent 4 years during which the home was rented out. I have asked the CRA to clarify if a similar election could be made for a secondary suite, when for example after four years of renting the suite is deactivated and again absorbed in the main house and the response was that “such an election cannot be made where there is only a partial change in use of the property.”

Based on this I am fairly convinced that the portion of a home used as a secondary suite or laneway house is not exempt from capital gains tax. Despite my best efforts I might still be reading this wrong, in which case I would love to have an expert weight in on this.

###Estimating Capital Gains Generated by Suites To estimate the amount of capital gains tax based on secondary suites expected to accrue annually in the City of Vancouver we use the inflation-adjusted land value gain of a home as a proxy for the portion of the appreciation of the property that is not due to improvements the owner made to the home, i.e. the portion that would be subject to capital gains tax if this wasn’t a primary residence.

To compute the taxable gains for an individual property we take the difference between the current land value and the (inflation-adjusted) present land value at the time the property was bought. To simplify things a little we will consider the current average (over SFH with suite) land value, the average holding period (years between buy and sell), and the average inflation-adjusted land value gains. This can be refined, but should suffice for our purposes.

Roughly estimating that on average a secondary suite takes up about a quarter of the area of a house, we attribute $21,250 of the $85,000 annual land value gains to the secondary suite for tax purposes.

The way capital gains tax works is that half of the gains are taxed at the marginal tax rate. As these tend to be large sums of money at a time, it is safe to assume that the the effective tax rate on the gains is relatively high, say 35% or more. Some of the taxes could be deferred by e.g. transferring the gains into RRSPs and later taxed at a lower rate. But we will ignore this, it has the effect of lowering the effective tax rate on the gains and move the tax payments into the future, but will not effect the overall amount of capital gains declared.

Assuming an effective tax rate of 35% on the gains we expect on average $3,700 of taxes payed per home with suite per year through this mechanism. With conservatively estimated 30,000 secondary suites in Vancouver that adds up to a tidy sum of $111,000,000 for capital gains taxes paid due to secondary suites in the City of Vancouver. Per year.

##To Rent or Not to Rent Out a Suite In the case of rental suites with owner-occupied main portion the suite incurs both income and capital gains tax obligations. This begs the question what minimum rent is required to offset the capital gains obligations in a particular year. Typically homeowners don’t know the annual value value gains ahead of time, so this is more of an academic exercise than a practical questions. The important takeaway is that the capital gains exemption has the effect of dramatically lowering the cap rate for converting part of a principal residence into a rental unit.

This we can compare to the effective tax rate on the capital gains, which is given by multiplying half of the tax rate (as only half the gains are taxed at that rate) with the rate of land value rise, which comes in at 1.75% with our standard assumptions.

To conclude this calculation we define the net cap rate as the difference between the cap rate and the effective tax rate on the capital gains. If this is positive, it is the advantageous to rent. If it is negative, leaving the property vacant will yield higher returns.

More specifically if we want to understand if it was advantageous to rent out a suite in a particular year for a particular property we can adjust the assumptions in the interactive at the bottom accordingly. For example, in the year 2015 we saw an average land value gain of about 20%. Adjusting the rate in the interactive, and setting the holding period to 1 year, we get a net CAP rate of -1.6%. The break-even rent, above which it is advantageous to rent out the suite, was $1,820. 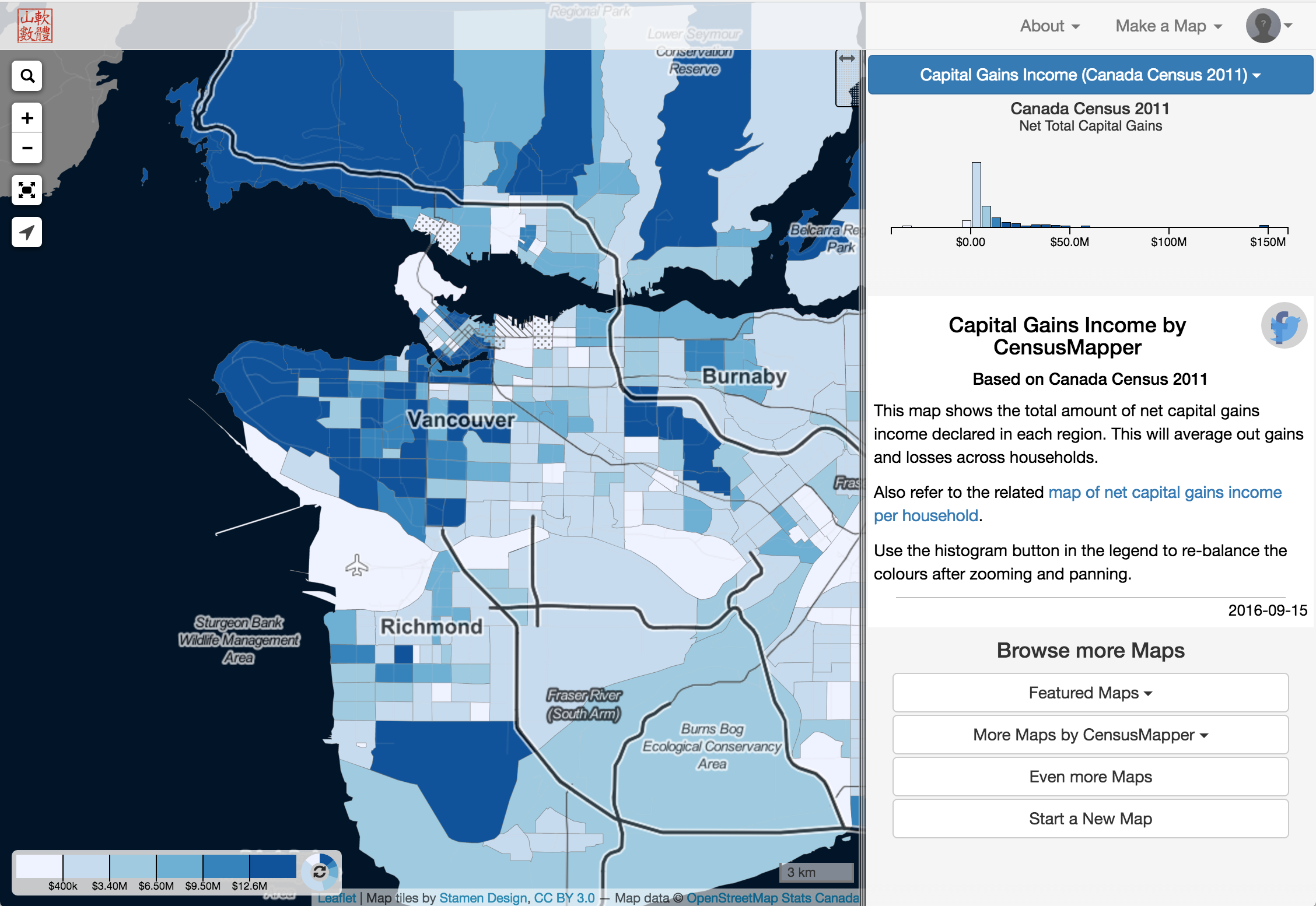 In the City of Vancouver, a total of $830 million of net capital gains and losses was reported to the CRA in 2010, most of which was claimed by people living on the west side. When comparing to 2010 taxes we should adjust our calculation to the average east side single family land value of $620,000 in 2010 and might want to assume a very conservative inflation-adjusted land value gain of 5% per year (I have no data before 2005, but one could use sales data to estimate this better). This would yield an expected taxable annual capital gains of $10,000 per suite in each area (with expected annual taxes generated of $1,750 per suite), adding up to over one third of all capital gains reported in the City of Vancouver that year. And that’s not counting taxable capital gains from selling investment properties that were not used as principal residence at all and where all the gains are taxable. Or any other source of capital gains income.

Eyeballing the total capital gains reported suggests that tax compliance could be improved. It seems that the changes in requiring the reporting of a sale of a principal residence that were announced yesterday will do just that.

For people interested in adjusting the assumptions made for these estimates I made a quick interactive to facilitate this. Adjust to fit your own assumptions.