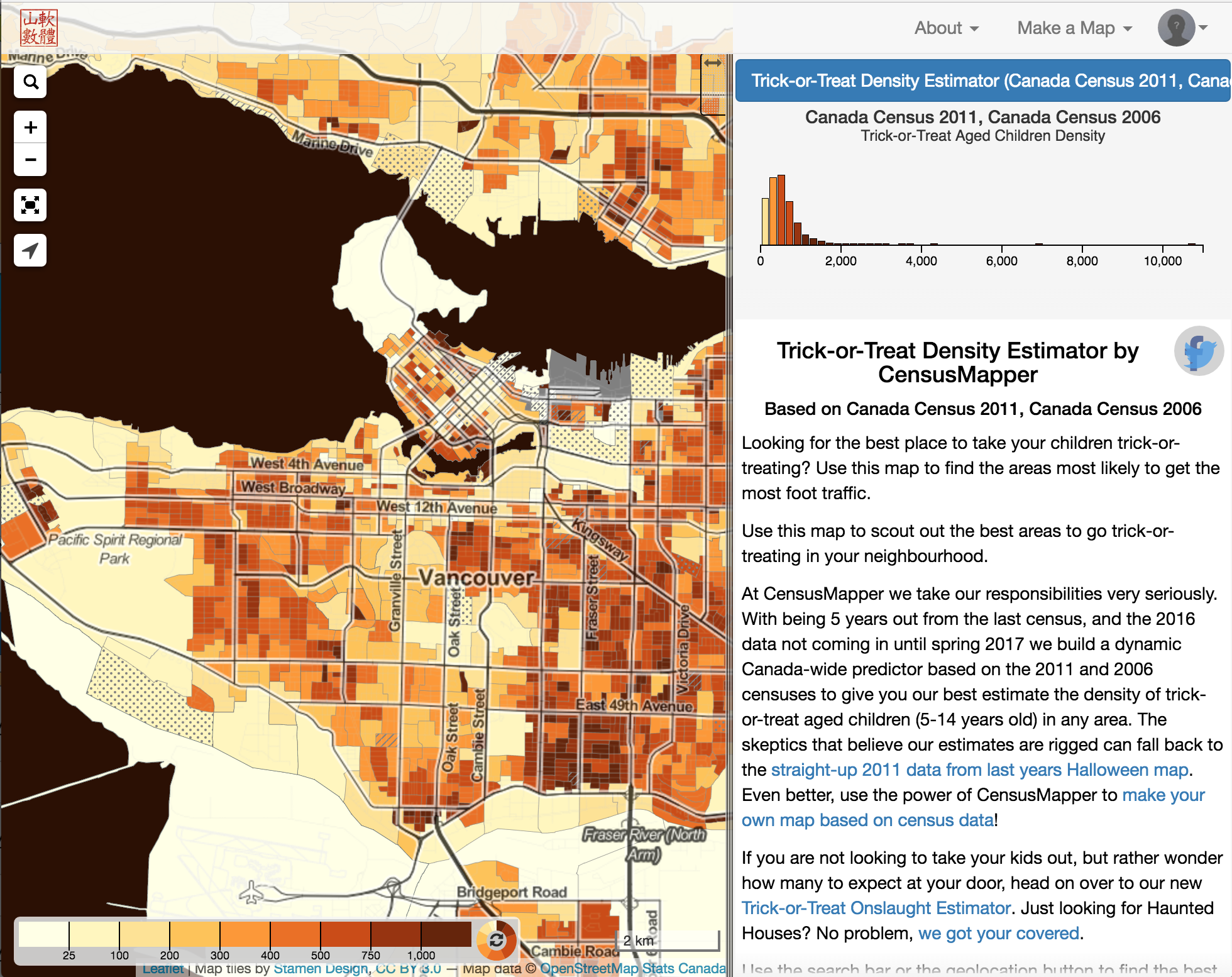 A year ago, as were were just getting CensusMapper up and running, we put out three Halloween-themed census maps. Those maps almost broke our servers when they went viral. At least as viral as census data goes. They were viewed by over 150,000 Canadians over the course of three days. And many of those came back to view the maps more than once.

Lots of things have happened at CensusMapper since last year, and we heeded the call and put some of CensusMapper’s prowess to use to make some important improvements for this Halloween.

We are stuck in a weired place this year. We just completed the most successful census in the Canadian history this May, but the results are still undergoing quality control and will only get released starting this coming spring. The 2011 census, that last year’s maps are based on, is now 5 years old. Some children that were of prime trick-or-treating age (which we take as 5 to 14 years old) in 2011 are now in College. And some that weren’t even borne in 2011 will be out knocking on doors this Halloween.

As people move around, the composition of neighbourhoods does not change all that much over time. Young kids grow up to take the place of the older kids in the neighbourhood. That was our take last year, as we were still mapping 2011 data to give people an idea how many kids would show up on their door or where to expect the most foot traffic.

This year we improved on those maps by building a dynamic estimator that estimates conditions on the ground this Halloween. We have:

How did we estimate things for 2016 Halloween?

An skillful estimator strikes a balance between simplicity and effectiveness. We decided to make use of the following data:

Then estimating the number of children that did not move is easy, we simply age the children we saw in 2011 forward by five years and weight them by the proportion of non-movers.

To estimate the number of children moving into the area take into account at the trends from 2006 to 2011 in each area and extrapolate from there to 2016. And weight the number by the proportion of the population that did move and also allow for some population growth according to the 2006 to 2011 trend.

I will spare you the exact formula. It is possible that refining the model and adding in more variables could make some improvements to the estimates, but overcomplicating the model also leads to risks of exaggeratig biases. We feel that our simplistic model strikes a good balance between simplicity and effectiveness. It will be interesting to see how we did when 2016 data comes in.

For the data nerds still reading, the CensusMapper servers actually don’t do any of that work. They just server straight-up census data. Plus the instructions of how to use the data to make the map. All the computations and drawings are then done locally on each user’s browser. That’s what keeps our servers lean, responsive, and most importantly maintains maximum flexibility. With the same process we can easily map any function built from census variables. Canada-wide and across all the entire geographical census hierarchy, from all of Canada down to Dissemination Areas and, for some data, even Dissemination Blocks. Bwetween the 2006 and 2011 census variables and all the different geographic regions we have about 1 billion fields in our database that we can map dynamically. Still a far cry from “big data”, but enough to require some careful architecture choices.

Census Mapping for Everyone

Census data can be very complex and mixing various variables is powerful yet prone to produce meaningless maps due to misinterpretation of the census variables. Since last Halloween and now we are proud to have been able to open up some of CensusMapper’s capabilities to the general public. Everyone can now make Canada-wide interactive maps based on single 2011 census variables via a couple of mouse clicks and share the freely. You can read more about this in a previous blog post or jump right in and make your own map.

Here are some of the questions we got most last year:

Are the maps only for Vancouver?

No. All CensusMapper maps are fully interactive and by default Canada-wide. Use the search function or geo-location button to switch to any place in Canada that tickles your interest. Pan and zoom around to explore. You can always share the current view of the map with your friends by grabbing the URL in your browser address bar or using the build in share buttons.

How accurate are the predictions?

Accuracy of predictions vary. Some parents will drive their kids halfway across town to find the best area for trick-or-treating. Some areas change too fast for our estimator to catch on. And some neighbourhoods have traditions and local areas where kids congregate that we don’t have data for. So these maps are best use in conjunction with local data.

Won’t your maps lead to more people trick-or-treating outside of their neighbourhood?

While our maps can be used to facilitate driving kids across town to trick-or-treat, we encourage everyone to also use the map to find areas near where they live, and where the kids can walk to. We believe an important part of the Halloween experience is for everyone to get to know their own neighbourhood better, see things in a new light and experience the joys of running into friends and acquaintances, and making new friends, along the way.

I am running out of candy / I got way too much candy!

The Onslaught map just estimates the average number of children that knock on doors in each area. Some doors will see a lot more kids than others. Take the Yaletown example from above. Most of the action happens on the street. So while on average people can only expect a moderate number of trick-or-treaters at their door, the ones at ground level will be very busy, while the ones higher up will likely just see one or two neighbour kids from the same floor.