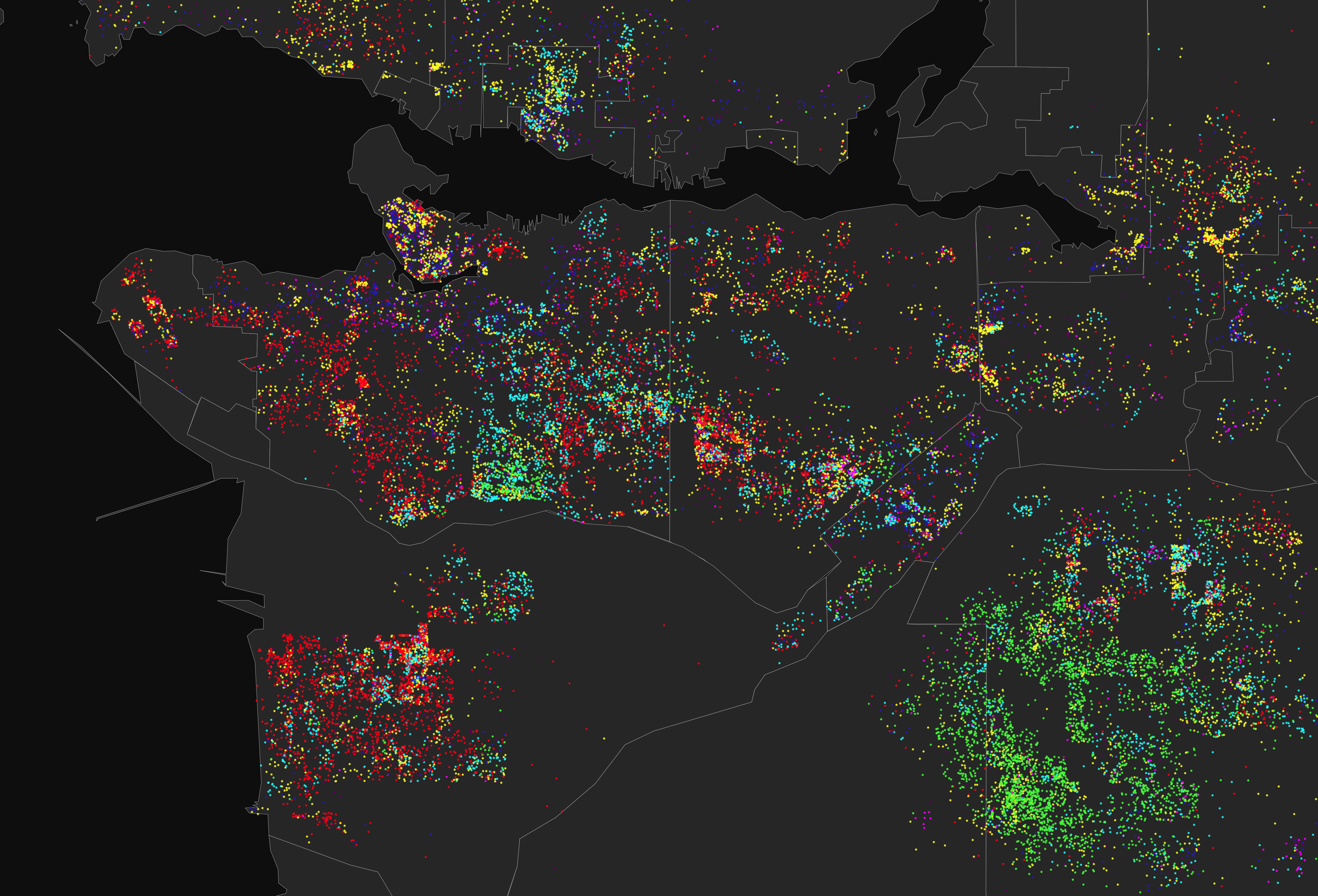 I started writing this blog post in December 2015, when CensusMapper quite a bit younger and I hacked together some basic dot-density maps. I never much liked the results and have been slowly improving and thinking about them. I am still not entirely happy with the current implementation, but it is slowly getting there. The final impulse to finsish this post was the work on cancensus, and R wrapper for the CensusMapper API my explorations in multi-category dot density maps in R, now tied up into the new dotdensity package.

One person at a time

Dot-density maps look pretty cool. They have been [flying around the itnernet](https://www.google.com/search?q=dot-density+map+images&client=safari&rls=en&tbm=isch&tbo=u&source=univ&sa=X&ved=0ahUKEwjuy9Ch6PjJAhUivXIKHWcvDb4QsAQIHA&biw=1253&bih=812) lately, so we have been thinking about how to offer them in CensusMapper.

So what’s so great about dot-density maps? Essentially two things:

But once one looks closer there are lots of issues that need to be dealt with.

The devil is in the details

As simple as the the basic dot-density promise of one dot = one person is, it must fundamentally remain a lie for census maps. We simply don’t have the level of detail that the maps suggest. We don’t know the location of people with the accuracy depicted in the maps, and we certainly don’t know the categories that give the color with the accuracy suggested in the maps.

That’s the most serious drawback of dot-density maps, they often suggest a level of detail that simply isn’t there. Does that outweigh the advantages? For that it is useful to take a quick look at the alternative that we have been using at CensusMapper

Choropleth maps are the staple of census maps. Every census region gets colored depending on a value of a census variable (or function derived from census variables). While this is also quite simple, in practive there are a number of problems with that:

One other big challenge with dot-density maps is that they are surprisingly hard to make. Right now we at CensusMapper just have the bare minimum in place to produce these kind of maps: A way to randomly place the required number of dots into each geographic region colored by the given categories. Just when I was about to try myself at dot-density maps I saw a helpful tweet telling me exactly what to pay attention to, so the implementation was quick and painless. – Well, not quite, I still had to deal with issues due to polygons clipped server side and the fact that census areas are often multi-polygons. And one needs to be careful to employ random rounding when scaling to more than one person per dot, standard rounding may introduce systematic errors. 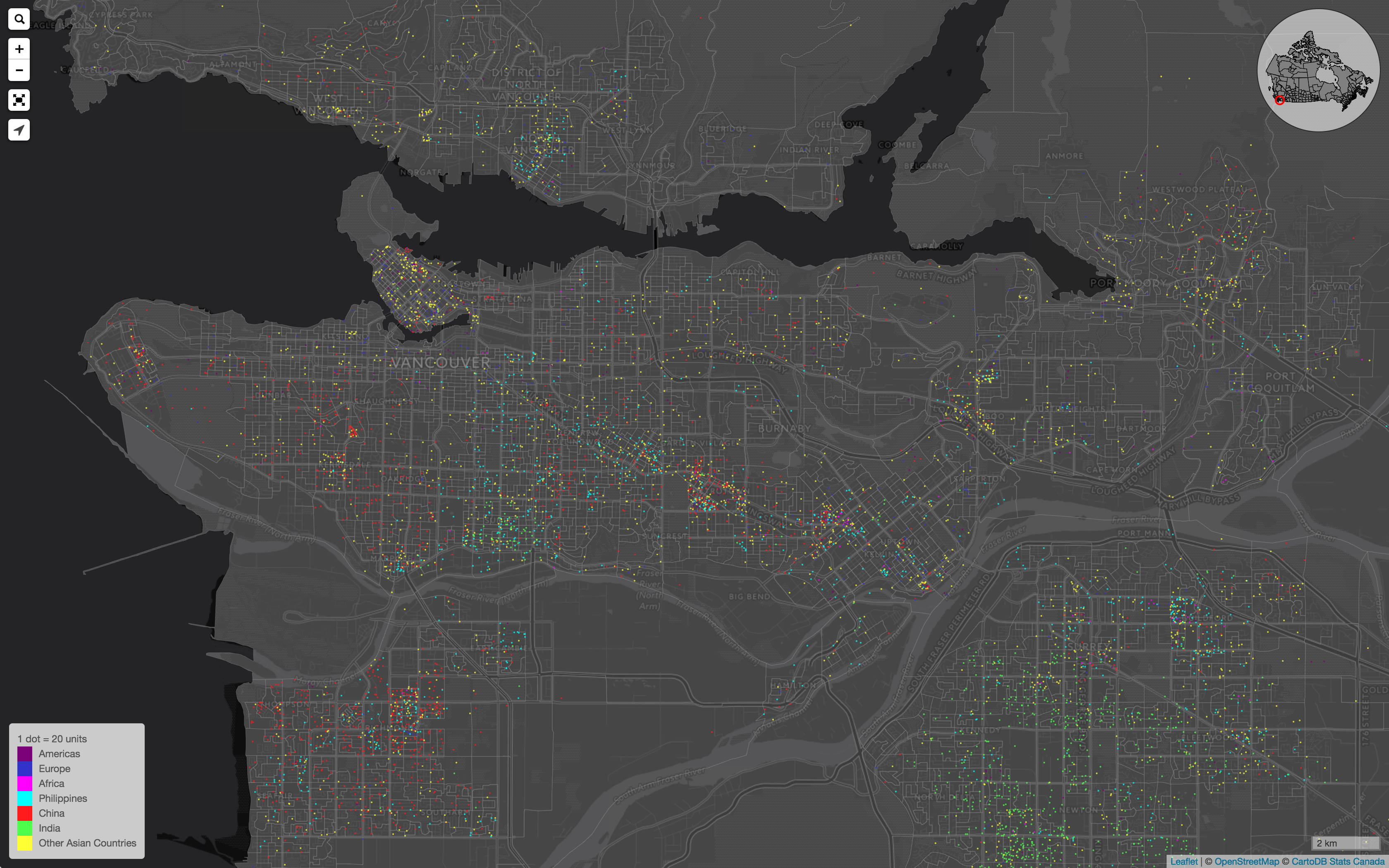 Statis maps is one way where the above issues don’t appear. And most importantly, we can fix issue 3. completely by taking the time to weight the placement of dots by census block level data. The new cancensus R package now makes it super easy to import cenusus data into R, and we wrote a dotdensity R package to implement common functions that deal with the usual pitfalls of multi-category dot-density maps. By moving from CensusMapper to R we trade the dynamic nature of CensusMapper for crisper images and improved processing and dot-placement. Often we aren’t interested in Canada-wide maps that are the staple of CensusMapper, but only want to focus on one particular region. Or maybe a couple of regions, and the cancensus and dotdensity packages still make it very easy to change the region and make the same map for a different geographic region. Or make changes to the variables we want to map. In particular in conjunction with the CensusMapper API helper that reduces the selection of geographies and variables to a couple of mouse clicks and let’s you copy and paste the R code to import the data through cancensus.

The dot-density package has two main functions that we use

dot_density.compute_dots takes care of converting geographic shapes with counts for each category into dots. This is fairly straight-forward, but we need to pay attention to two potential pitfalls.

The dot_density.compute_dots takes care of these issues under the hood. (And so does CensusMapper.)

dot_density.proportional_re_aggregate takes two nested geographies, for example census subdivisions and census tracts. It will compare counts across the geographic levels and adjust the lower-level geography counts with the more accurate higher-level data. If lower level geographic data has been suppressed due to quality or privacy concerns the overall counts at that aggregation level won’t accurately reflect the overall data. The dot_density.proportional_re_aggregate will re-distribute the missing counts proportionately among the lower level geographies, weighted appropriately.

The same function can also be used to weight the dots we want to draw by block level data, so this will produce maps that avoid placing dots in parks or other unpopulated areas, spacing them according to population density at the block level.

When the data is easily accessible and well-organized, it is incredibly easy to run analysis or visualize it. In CensusMapper, we can make dot-density maps within a matter of minutes, and with the cancensus and dotdensity packages it’s no different in R.

Hear are a couple of examples, first from CensusMapper with links to the live maps, and then from the vignettes embedded into the R package. 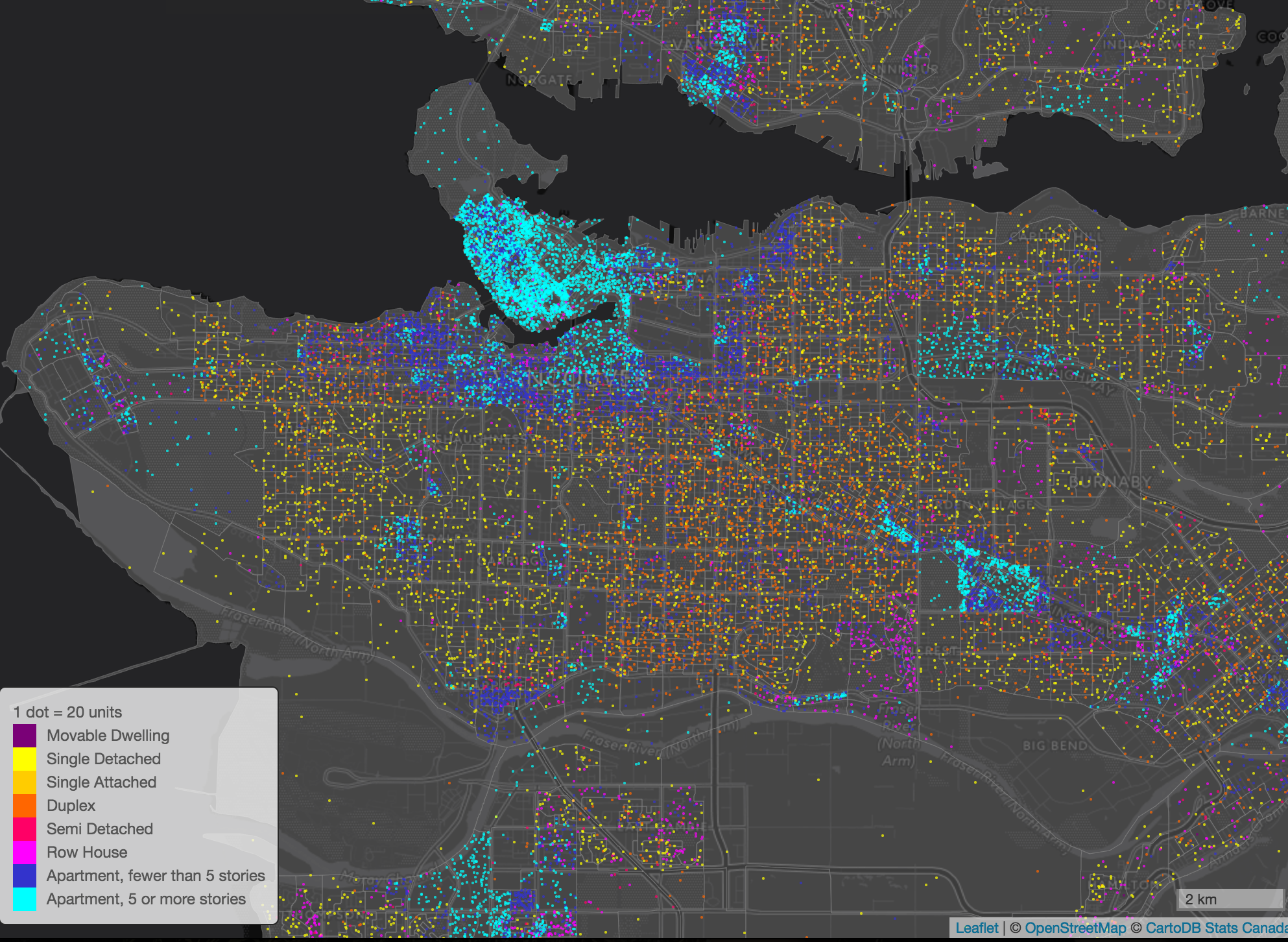