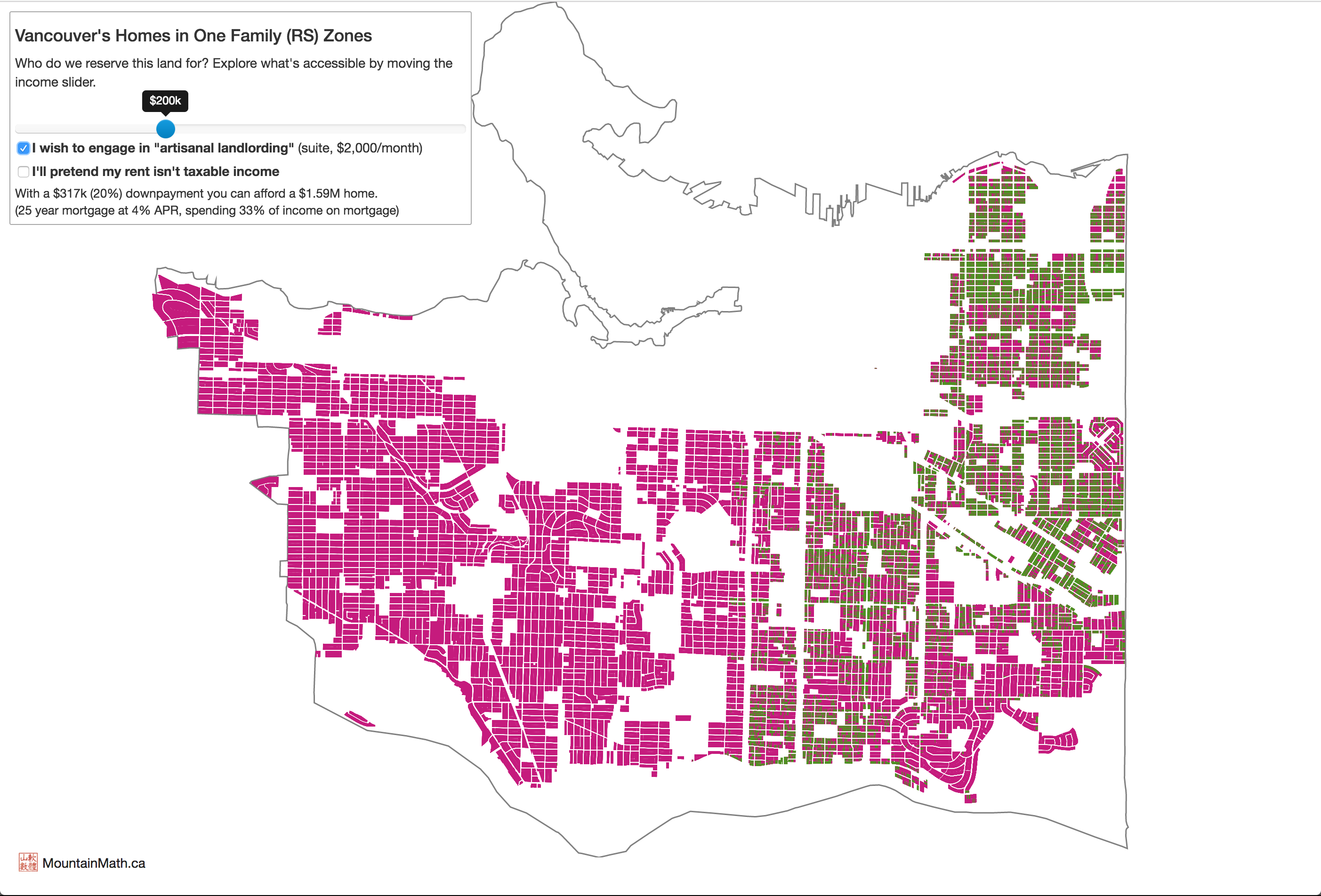 The night before the council hearing discussing the character home zoning review and changes to duplex zoning we decided to spend some time understanding for who we keep 67% of residential land zoned as “single family” (RS), and another 2% as quasi single family in First Shaugnessey (FSD) and 9% as “duplex” (RT). Keeping things simple, let’s just look at RS.

Who Can Afford To Buy?

That’s a pretty easy question to answer. The single family property market has been more or less flat year over year, do the latest available assessment data pegged at June 1 2016 is fresh. To figure this out I threw a slider on the map to allow people to select their income level. It then shows which lots these people could afford to buy, assuming they have saved up a 20% down payment and are willing to spend 33% of their pre-tax income on their mortgage. On top of that will go utilities, property taxes and upkeep. That’s a little more than what’s generally considered affordable, buy that’s a floating metric and given the desperate housing situation in Vancouver people tend to stretch the limits a bit.

At a household income of $125k we start to see the first SFH lots coming into range, at least if the prospective buyer is willing to engage in some “artisanal landlording”, and rent out an existing or newly created suite. That might come bite the owner in the back at the point of sale in terms of capital gains tax, but without the rental income the property won’t be affordable in the first place.

There aren’t too many of these homes around at the price range, and chances are that none of these are on the market when we are looking. We could increase our range (and thus our chances) by pretending that rental income is not taxable.

61,950 households in the City of Vancouver make at least $125,000, that’s almost as many as we have single family homes. The 43,945 households the census found that make over $150,000 have slightly more choices, although still almost nothing is available at $150k sharp without engaging in “artisanal landlording”.

The 23,310 households with income above $200,000 have a little more choice, and can even afford a home without renting out a suite. But not that many, being willing to rent out a suite significantly increase the options.

At $300,000 homes on the West Side start to come into reach in Marpole. Landlording still helps. But even a tax-cheating artisanal landlording $500,000 earning household still can’t touch the majority of the West Side.

If all else fails you can still take artisanal landlording to the next level and try to rationalize why renting out a suite on Airbnb is a good idea to increase your cash flow.

Who do we zone this for?

Honestly, I don’t know who we zone RS land for. The 23,310 households with income over $200,000? I don’t think people in that income group need special protection for their housing. They will be able to afford a place to live irrespective of zoning. And that still does not answer that question for the West Side. And no, the fraction of households making $500,000 per year is not enough justification to zone most of the West Side single-family.

RS zoning is dysfunctional. The ridiculous land value gains is a symptom of that, as is our teardown cycle that this is fuelling. At this point, incremental changes aren’t enough to ensure that this land serves the needs of Vancouverites.

These changes are good, and I support them. They are necessary steps and go in the right direction. We have already seen how this process produced multiplexes in Mount Pleasant that have significantly lower prices than nearby single family homes. But this kind of gentle density is slow to materialize, the heritage “retention” process makes it more expensive than it should be, and the density is barely enough to open this up as ownership options for larger portions of the population.

The focus on “character” is misplaced. We have an affordability crisis, and the city still makes “character” the pivotal point of their changes. The issue with our single family homes is simply that they are single family homes. It’s the wrong typology that we are forcing so close to the metropolitan centre. Let’s rethink what typology is right for the city, and will continue to work for the foreseeable future. Changing the zoning to e.g. allow zero lot-line 16' row houses, or 3-storey 6-plexes throughout the city won’t change the city over night. But with mindful planning it will set the stage for gradual change that allows more people to live in our city.