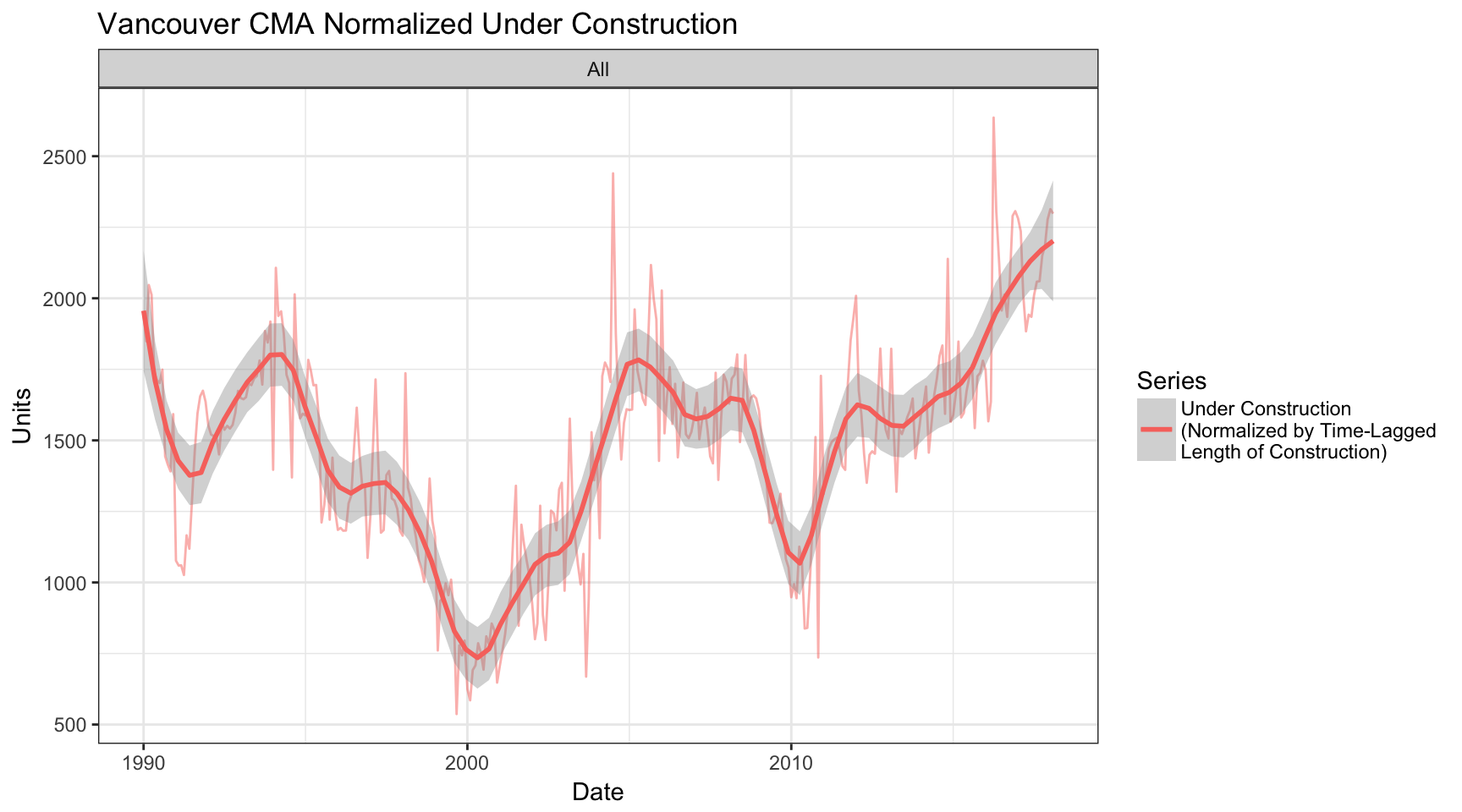 Currently we are at record levels of dwelling units under construction in Metro Vancouver. At the same time, we are also at record timelines from building start to completion. Those two are of course related in that the more projects are being worked on simultaneously, the harder it is to find and coordinate all the labour and materials to finish the projects. There are other reasons too for escalating construction times. We are building taller projects than we used too, more of it is concrete than there used to be. Single detached construction times are probably lengthened by increasingly larger and more elaborate single family homes. 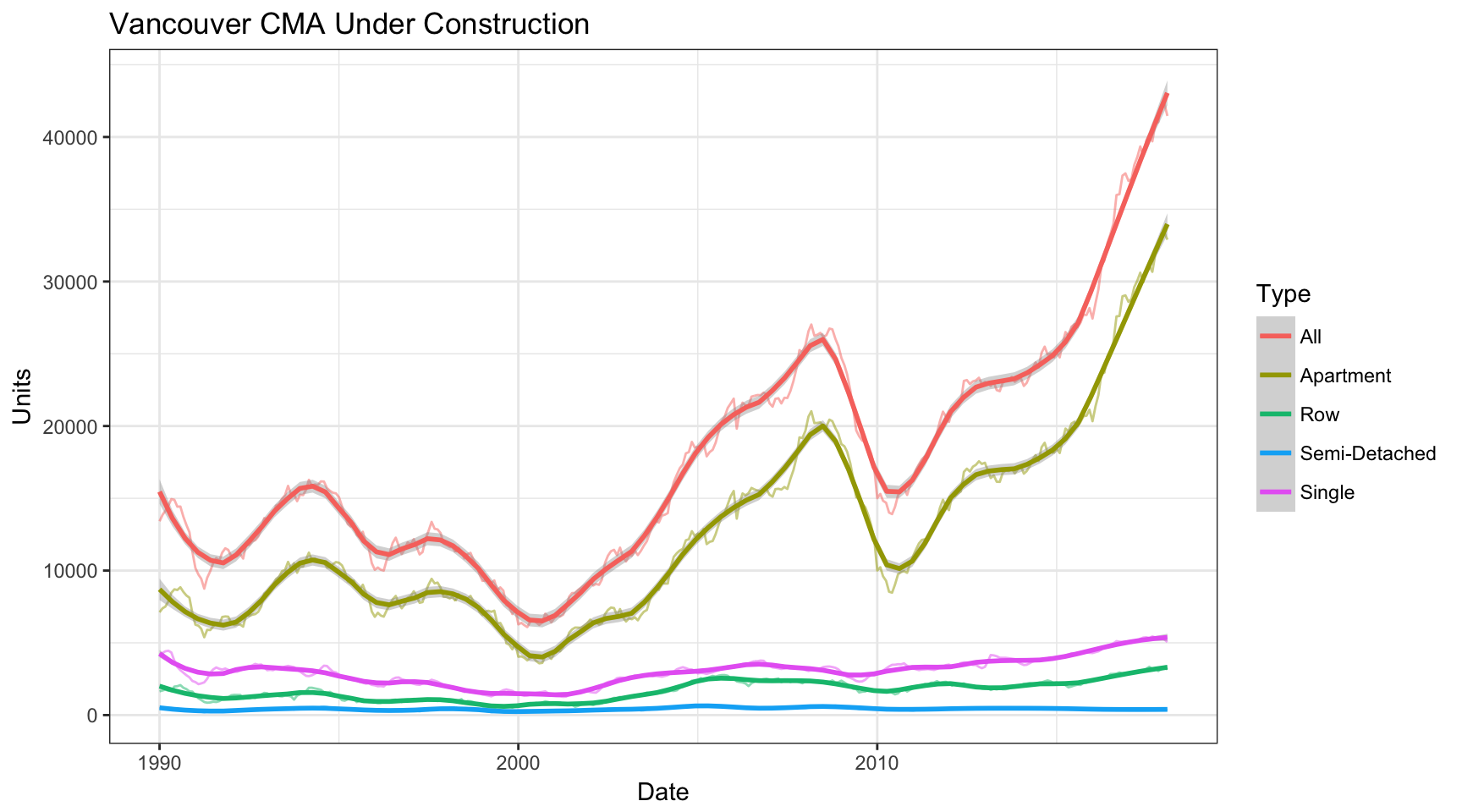 The length under construction is the mean duration projects completed in a given month took to complete. 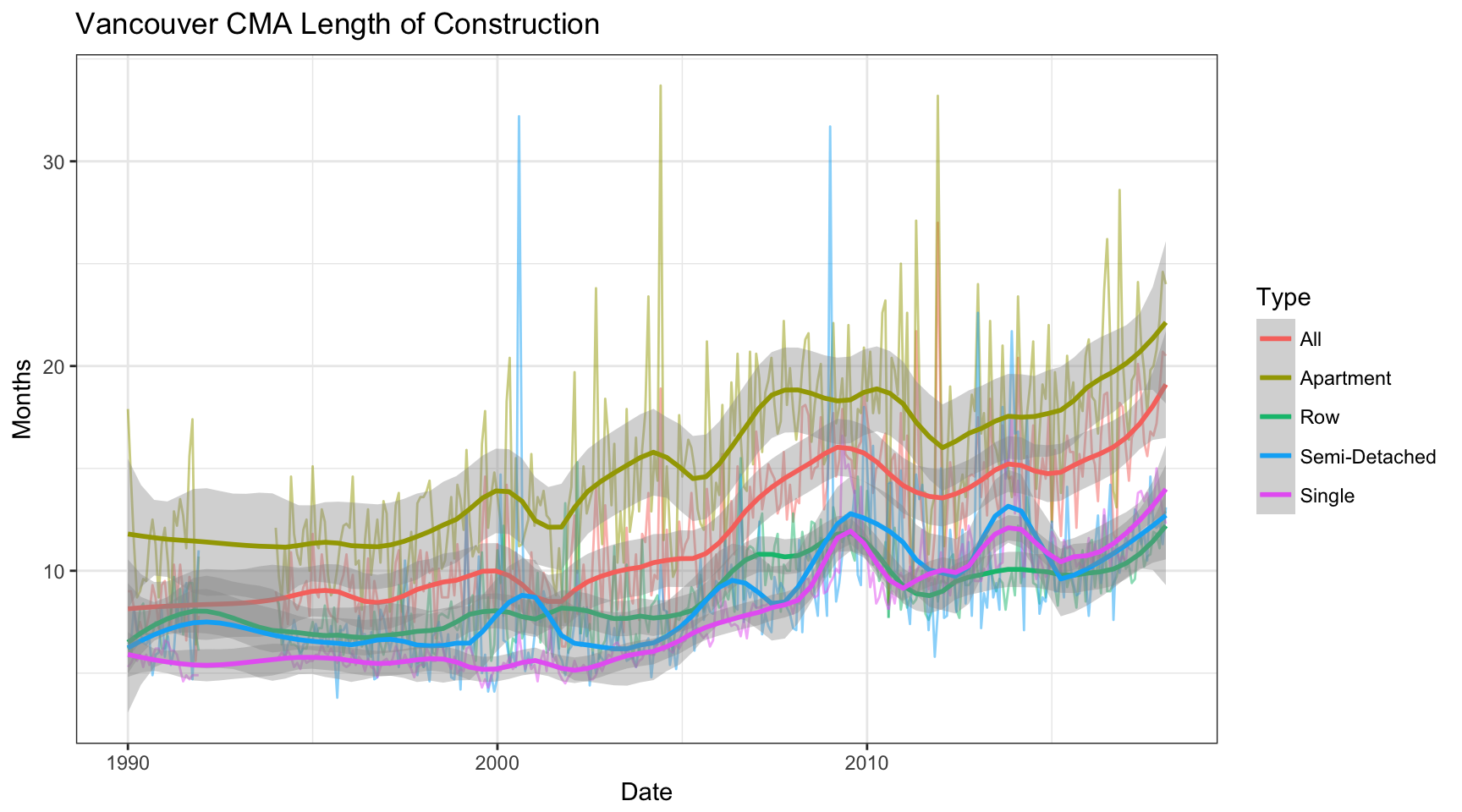 We right away notice a gap in the data for 1991 and 1992. This won’t bother us too much, but will make some of our estimates later on less accurate for the relevant time frames.

Up until 2002 it took about 6 months to complete a single family home in Metro Vancouver, by now it takes about a year. Row/Townhouses have traded places with single family homes now as the product that completes fasted these days. 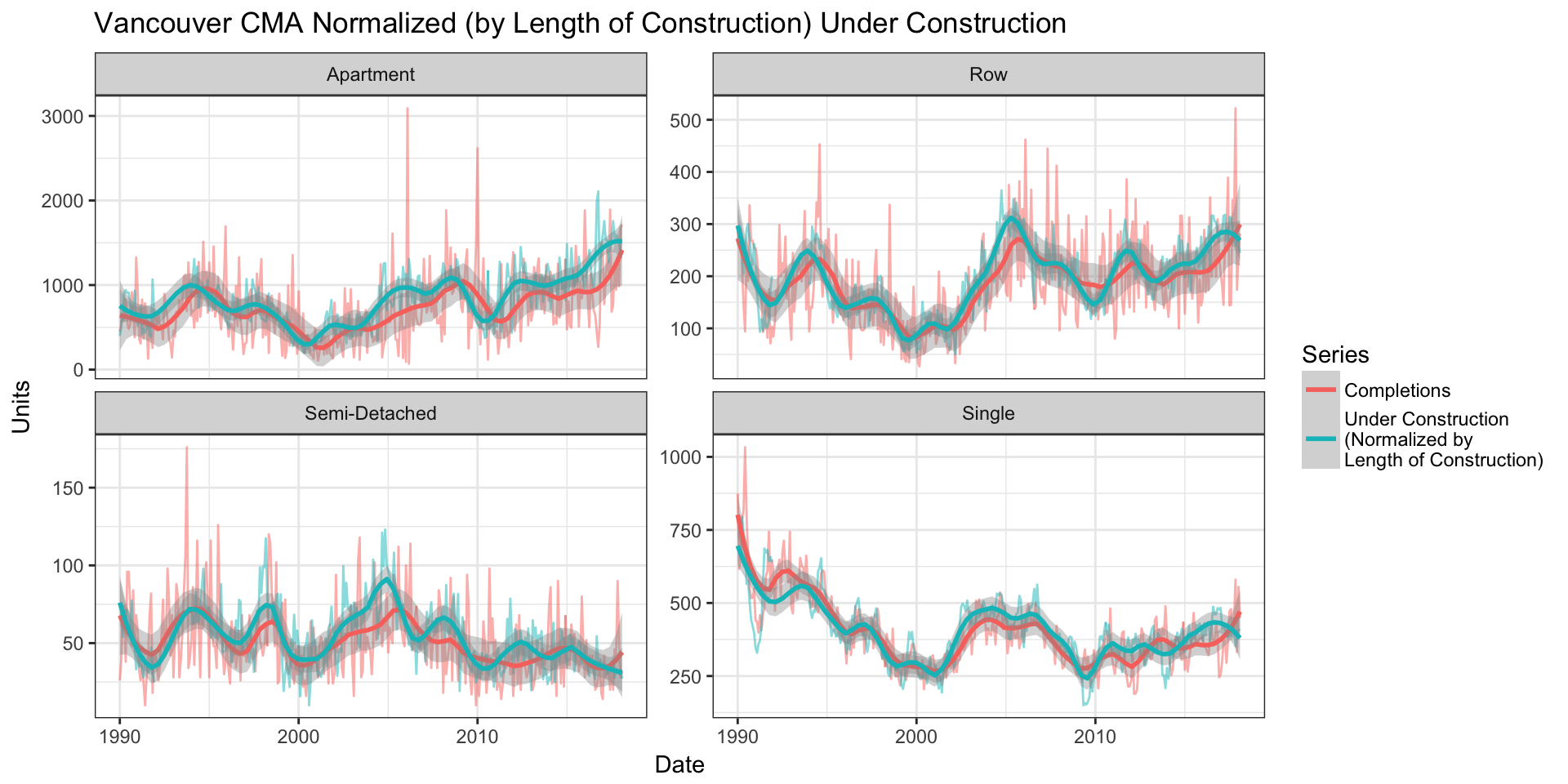 The match is decent, but it is noticeably off. One reason is that there is a time lag between mid construction and completion, but we don’t account for that when sloppily normalize the under construction inventory by the construction duration of the buildings that completed that month.

This will inevitably leave us with some missing values here and there as the shifts in time are not uniform. And for the most recent dates we don’t have anything to shift from, since we don’t know the construction duration of the projects currently under construction that will complete in the future. We will interpolate the intermittent missing values linearly and extrapolate the values at the end by just using the average completion duration for the most recent six months. 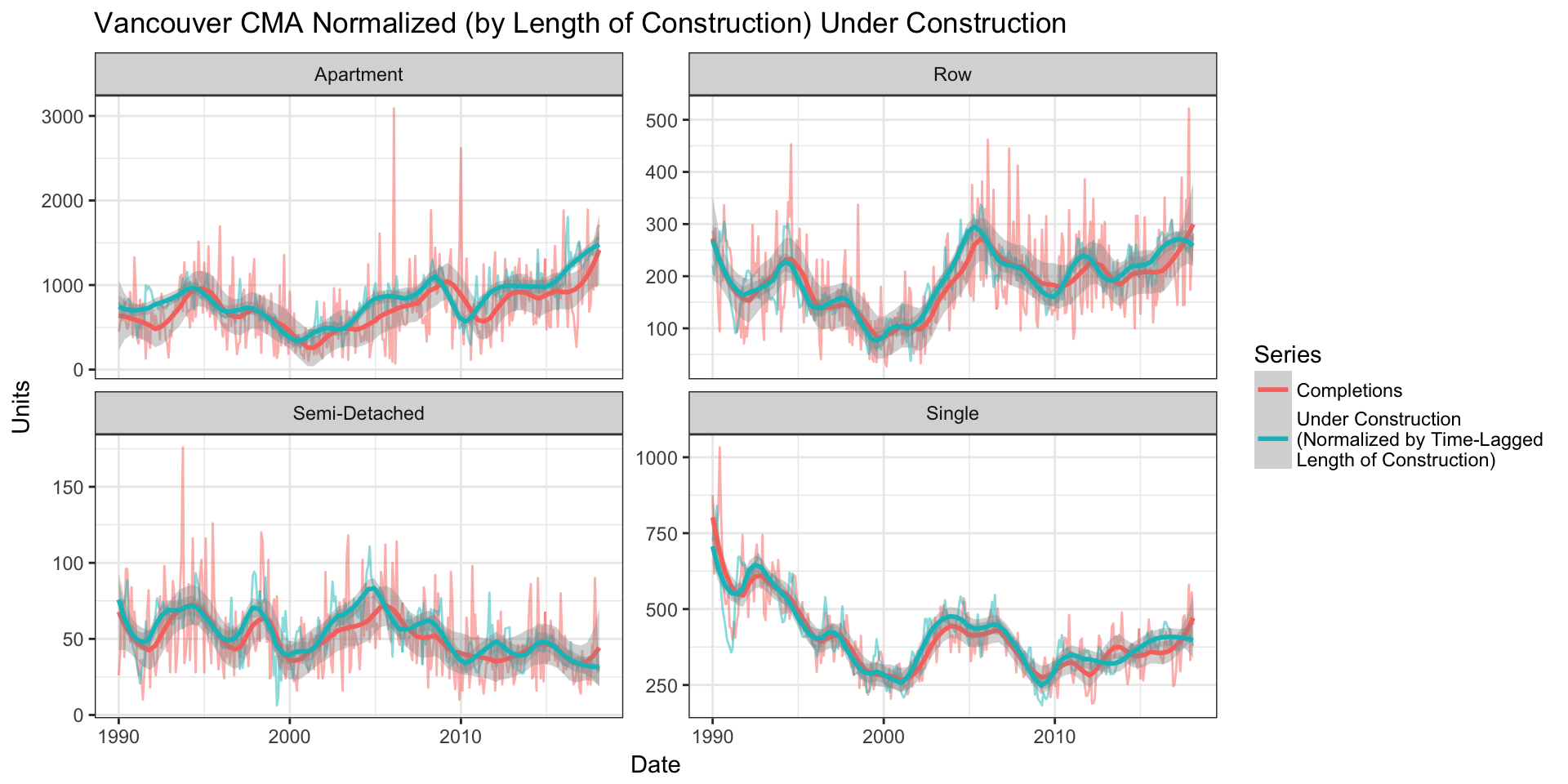 That means we should expect the average construction duration to increase further, which will bring out normalized under construction closer to the completion curve.

Finally, zooming in on the composite metric for all product types, we see clearly that the total under construction inventory right now is at historic heights, barring dramatic increases in construction duration.

But the under construction inventory, when normalized as expected monthly output based on completion times, does not look as extreme as the unnormalized graph at the very top. So more supply is coming, but don’t be mislead by not accounting for the effect of longer construction times.

As always, the R notbook that generated this post lives on GitHub, download it to reproduce the analysis, check how exactly it was done or make changes.