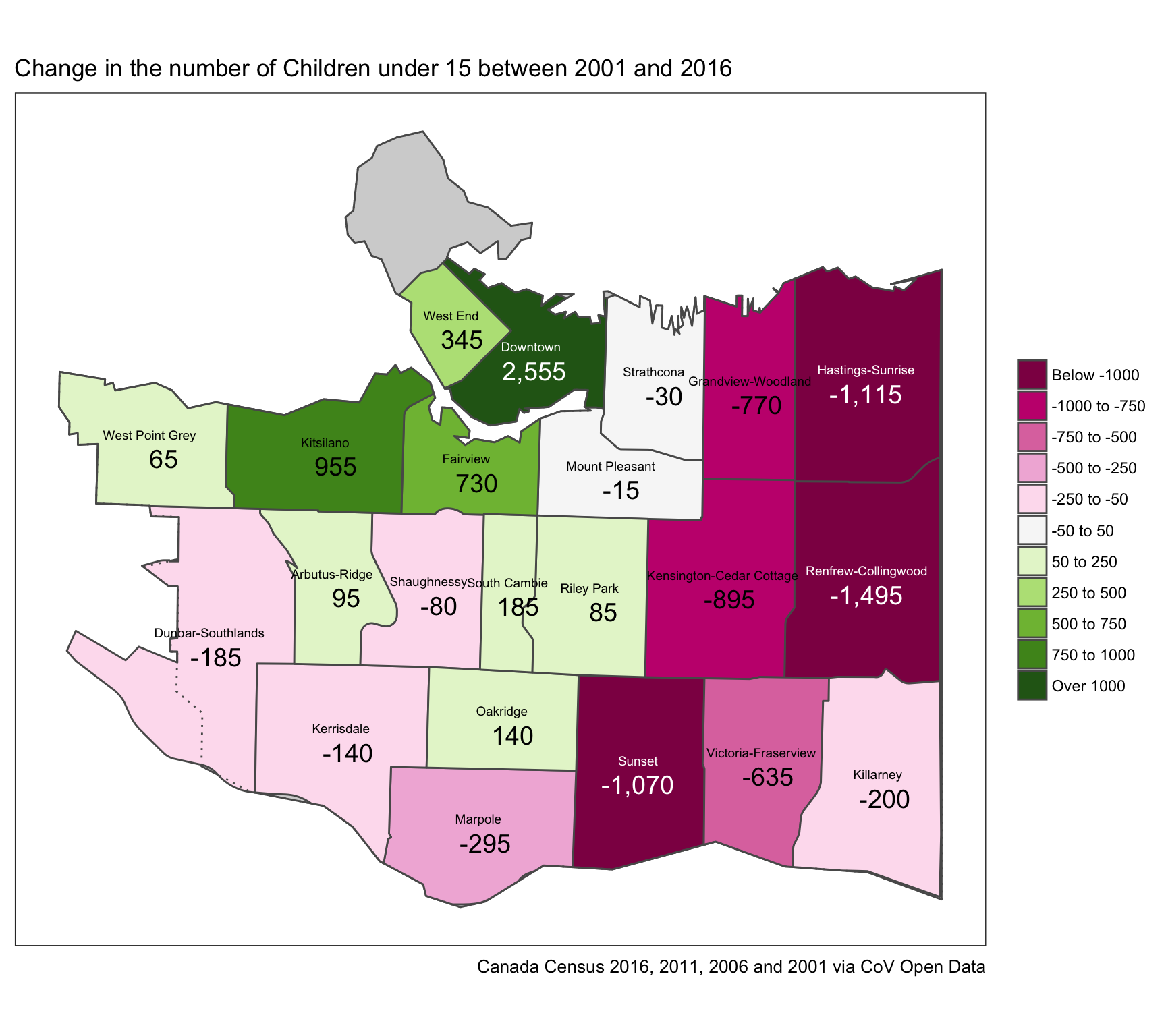 The neighbourhood level custom tab the City of Vancouver pulls for every census has arrived on the open data portal today. We have not worked much with that data because the 2011 dataset excluded the NHS, but it’s worth revisiting with the 2016 data now available. (Hopefully the 2011 NHS data will get retroactively added, it’s a bit of a shame that it’s missing and CoV return rates were quite reasonable.)

While a small dataset, getting it into working condition can be a bit of a pain.

As quirky as this is, the issues aren’t that big and I wrote a quick import function a while back that works for all four available datasets (and only needed minimal tweaking for the 2016 data). And yes, the code is included in the blog post in case others want to save themselves some pain.

Before we get started we should explain another quirk/feature of the data. The City of Vancouver assumes various roles within Musqueam 2, e.g. policing and some public infrastructure. I am not entirely sure what the exact relationship is (and would appreciate some pointers to a good summary), but for our case at hand it means that Musqueam 2 is included in the Dunbar-Southlands neighbourhood (but not in the City of Vancouver total that’s also included in the datasets). So summing data over all neighbourhoods comes up with a larger total than taking the CoV numbers, the difference being the counts from Musqueam 2. Something to be aware of.

Let’s load in the data and search for the variables we are interested in. To start off, we will look at the population of children below the age of 15. Most of the work is locating the variables of interest. We have done a similar analysis before looking at finer age brackets but broader regions for the 2006, 2011 and 2016 censuses.

This gives a very vivid view of the changing landscape of children in the City, with only Downtown, Kitsilano, Fairview and the West End adding significant number of children and massive drops in the more eastern neighbourhoods.

To better understand the trend over time we can view the change in 5-year steps. 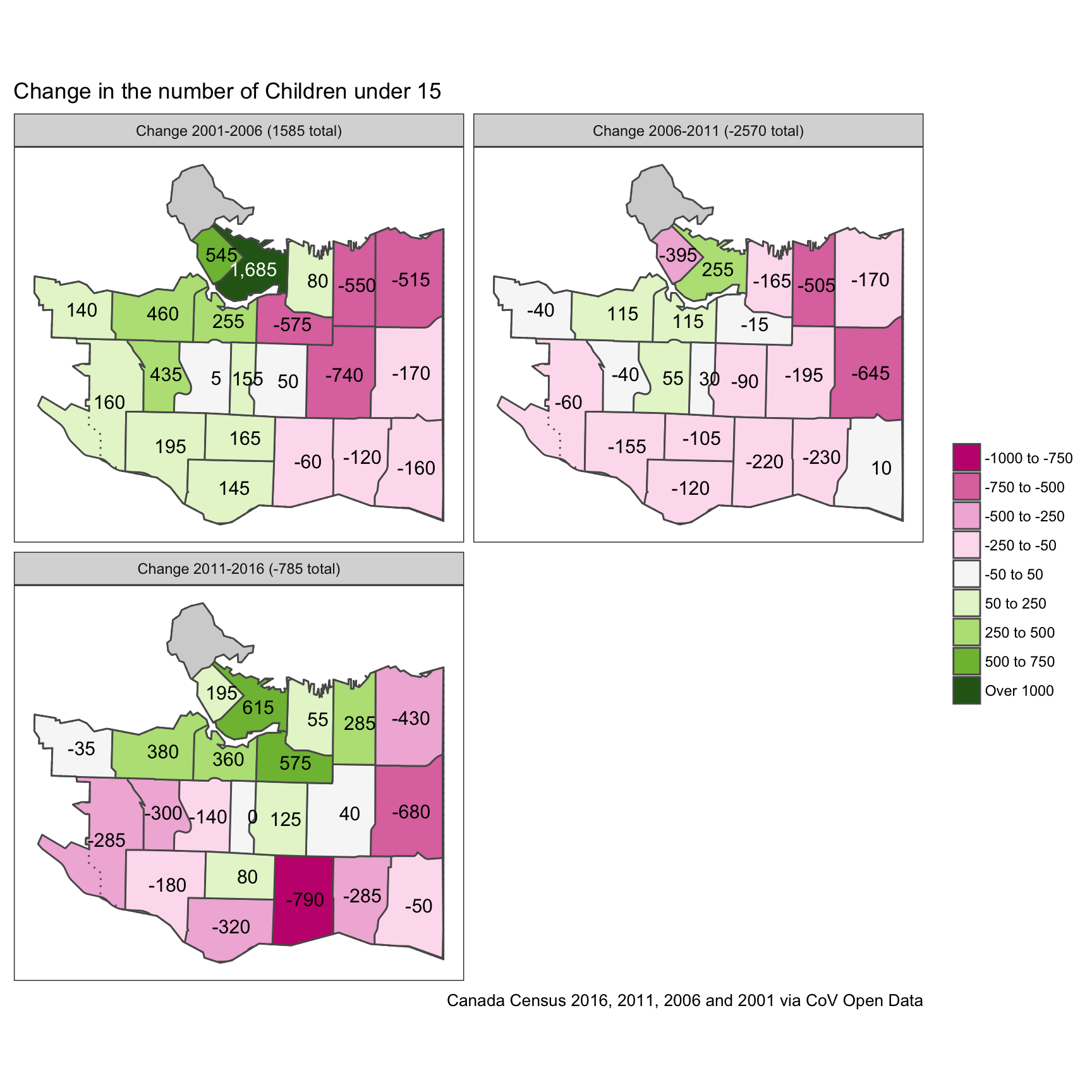 We see that between 2001 and 2006 the number of children in the neighbourhoods overall increased substantially, decreased dramatically between 2006-2011 and moderately decreased again 2011-2016. The general trend was that children were added in the central areas and dropped elsewhere.

Rates of renters by neighbourhoods has been in the news lately, so we can use the opportunity to refine some of the numbers and add temporal data to understand the development over time. For this we will have to skip 2011 since the City did not provide the NHS data at the neighbourhood level. 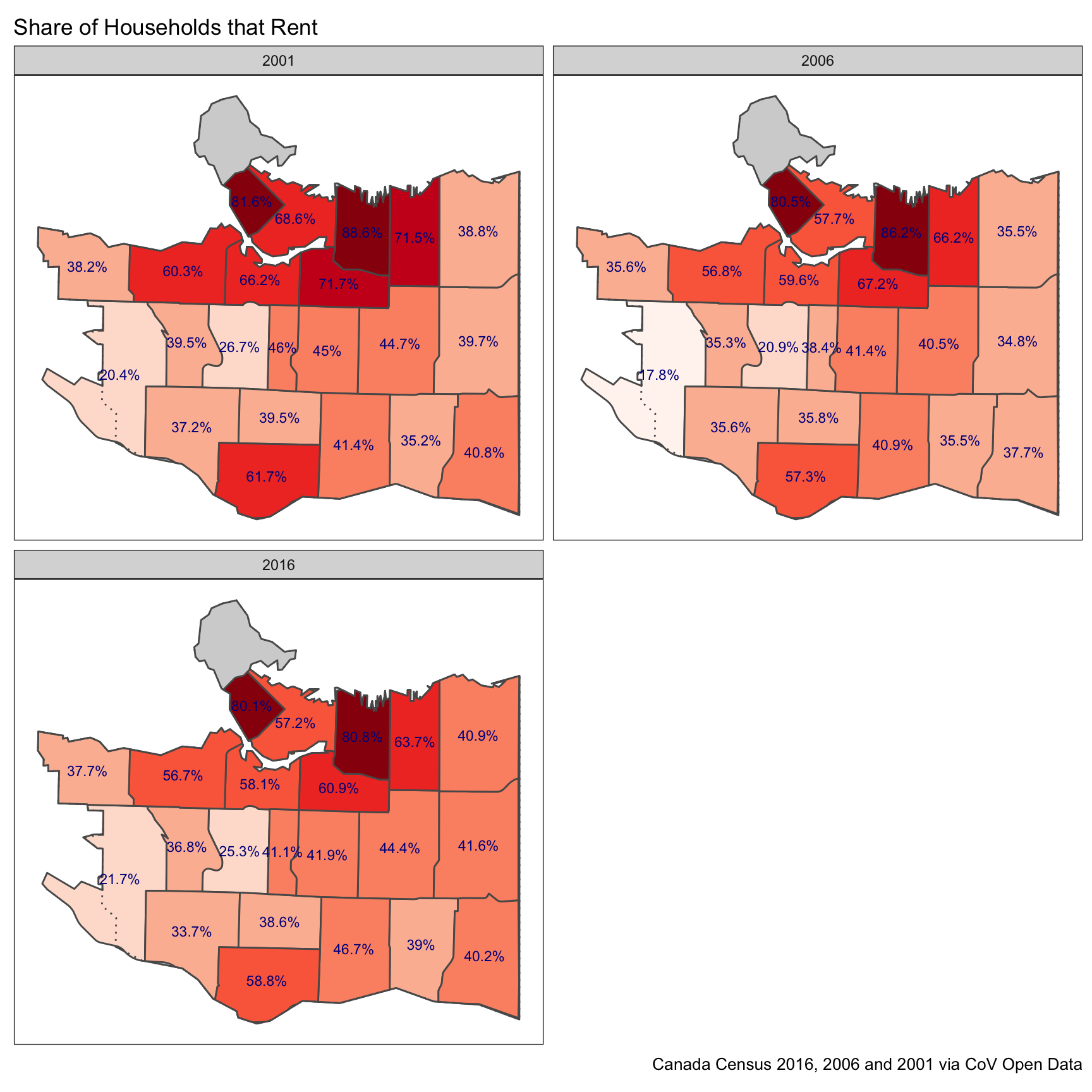 To better understand the trends over time we can graph the development. The red dots indicate the 2001 share, green the 2016 share with the 2006 share in black. Trend lines in red indicate a decreasing trend, the ones in green an increasing trend. 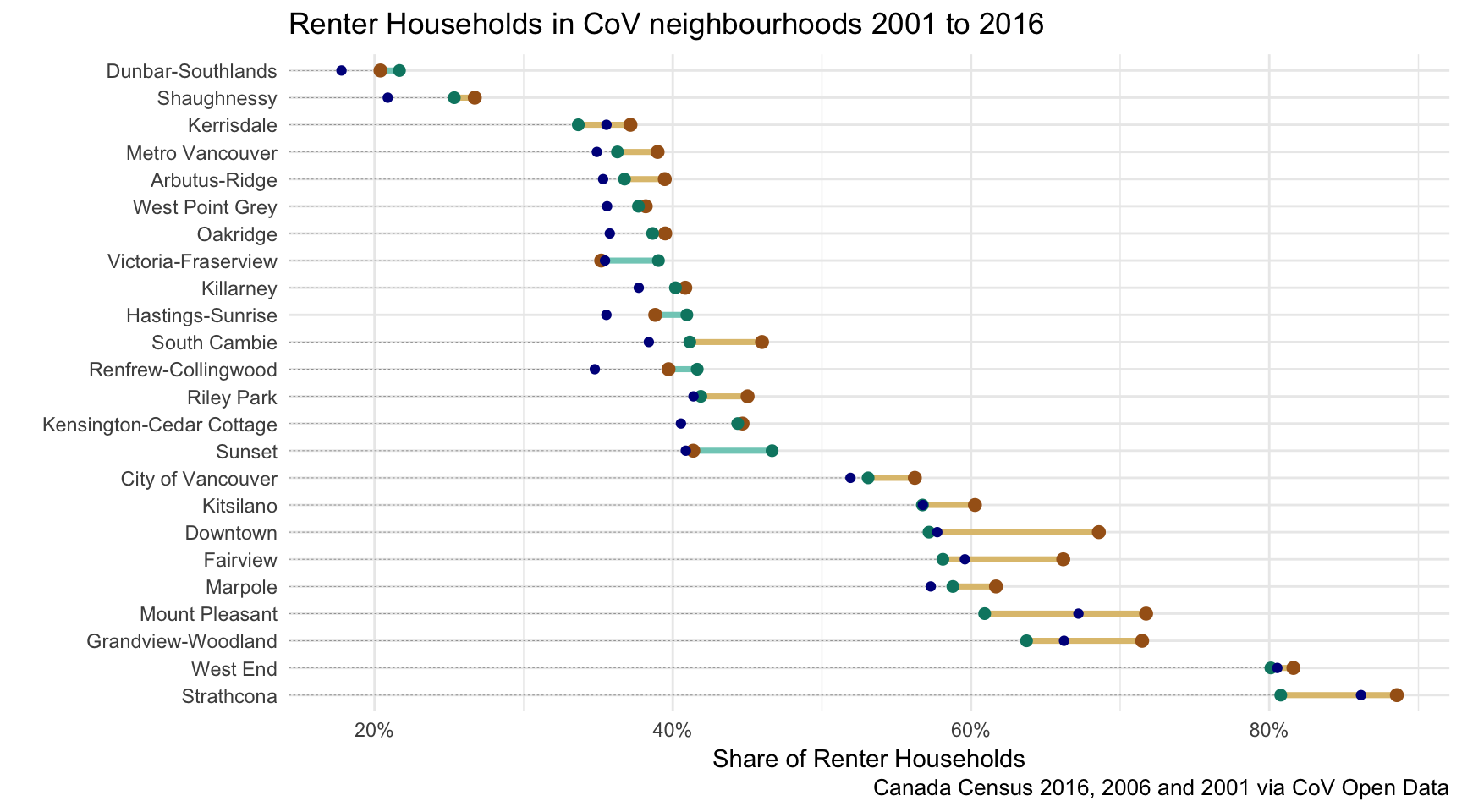 We can map the overall percentage change to get an idea of the geographic distribution of the change in share of renter households. 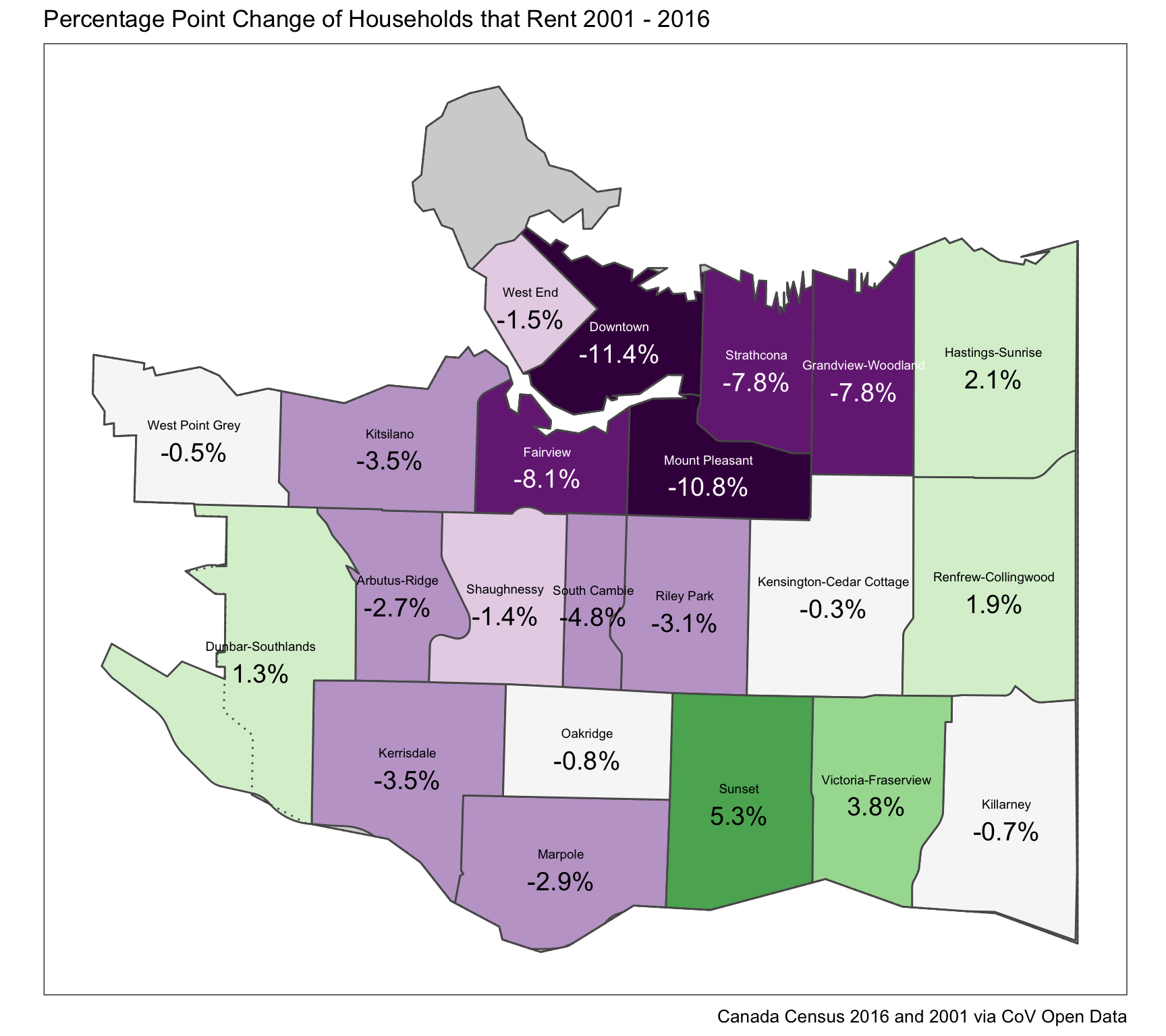 Lastly we can also look at the total change in renter households in each area. 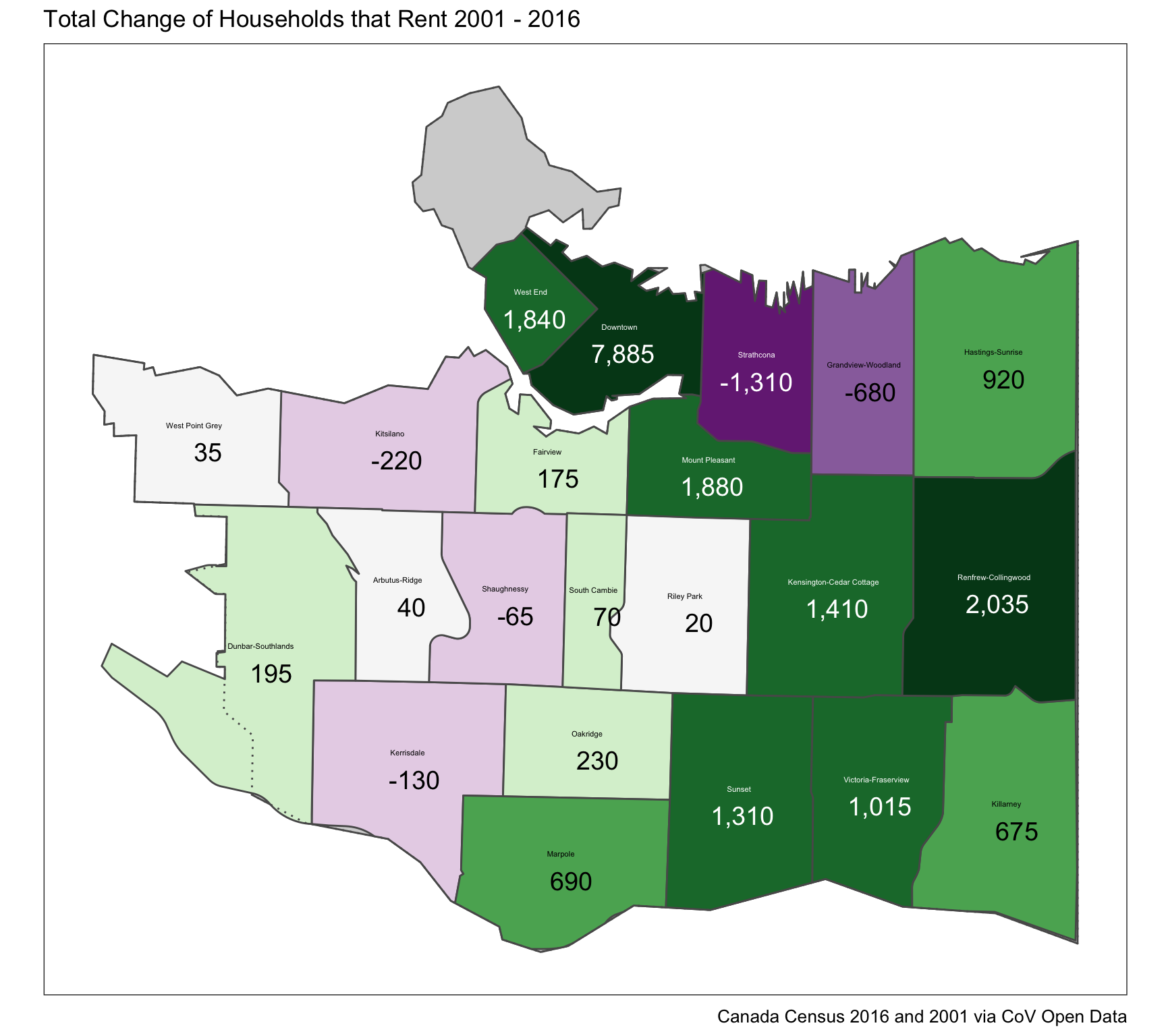 I was told that the drop in the number of rental households in some areas could have been contributed to by re-classification of housing from private to collective dwellings, in particular SROs and senior housing. According to the census dictionary SROs and senior homes should have generally been classified as collective dwellings, but that’s a judgement call. We have seen before that comparisons across time can be tricky as changes in definitions and enumeration methods can have large impacts. I have learned to appreciate all these little quirks in the census data and am grateful when people point me to any that I missed. 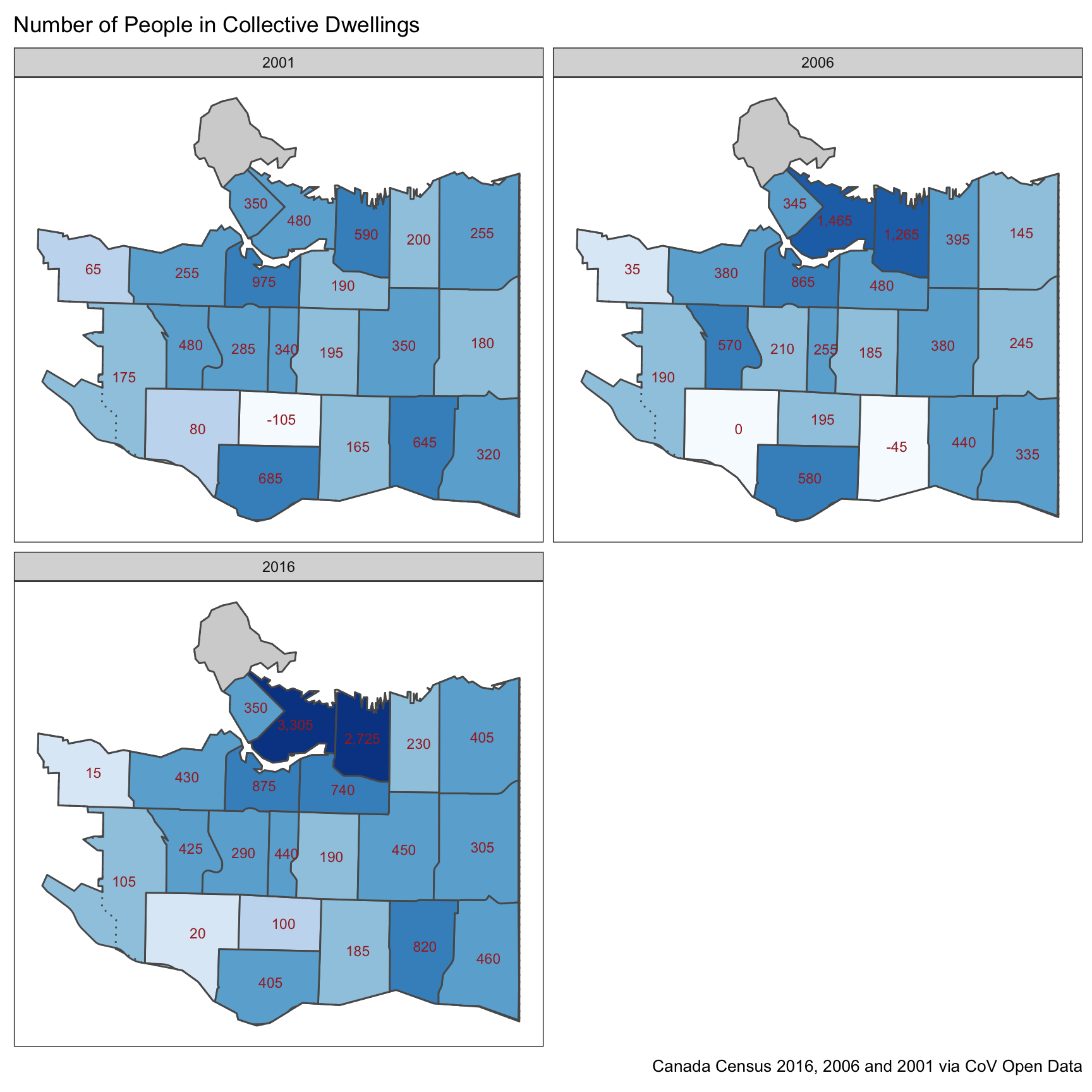 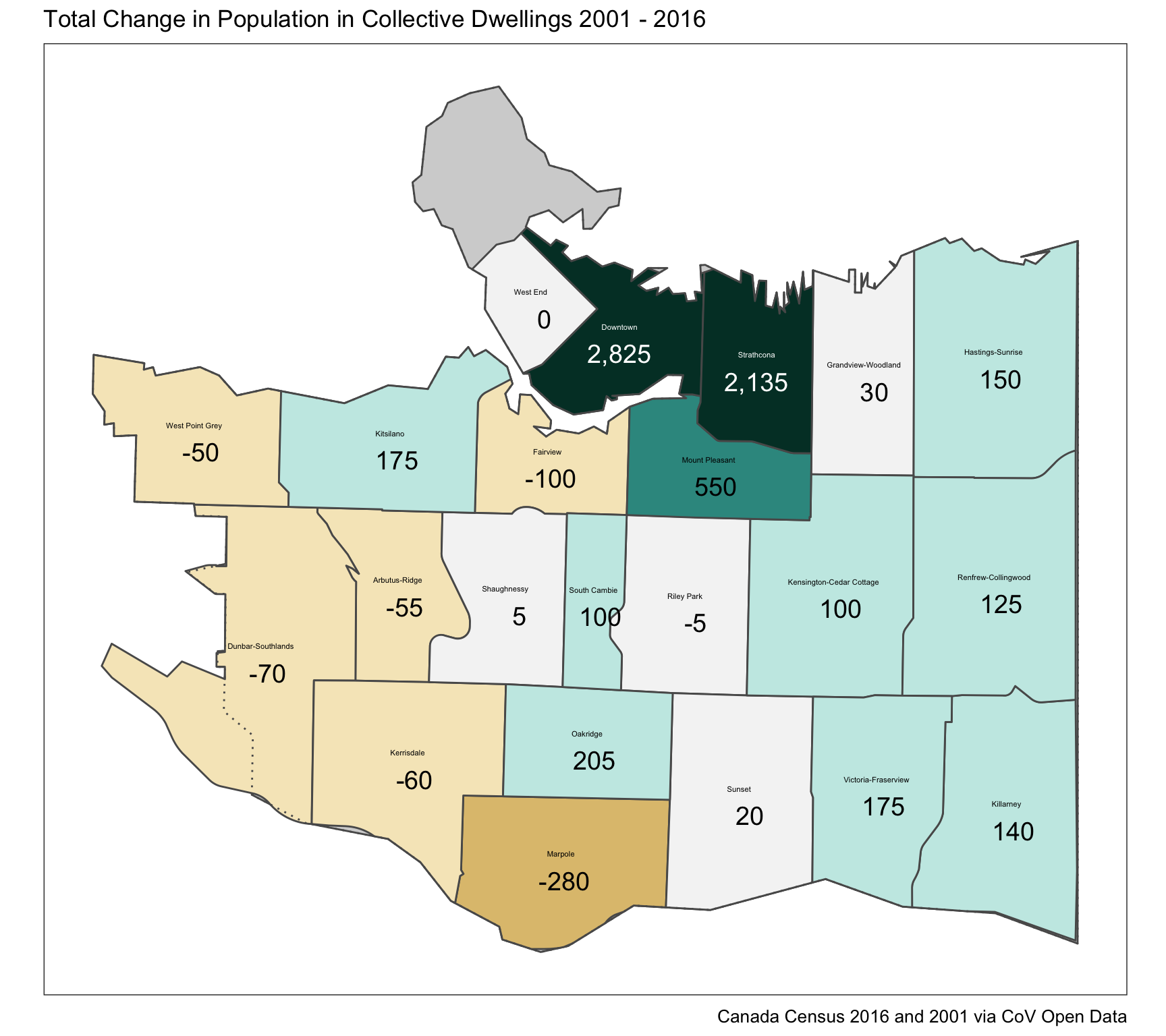 As always, the code that made these graphs is available on GitHub. This should make it easy for others to jump in and map or analyse different aspects of the neighbourhood level data. Curious to see what interesting things other come up with.