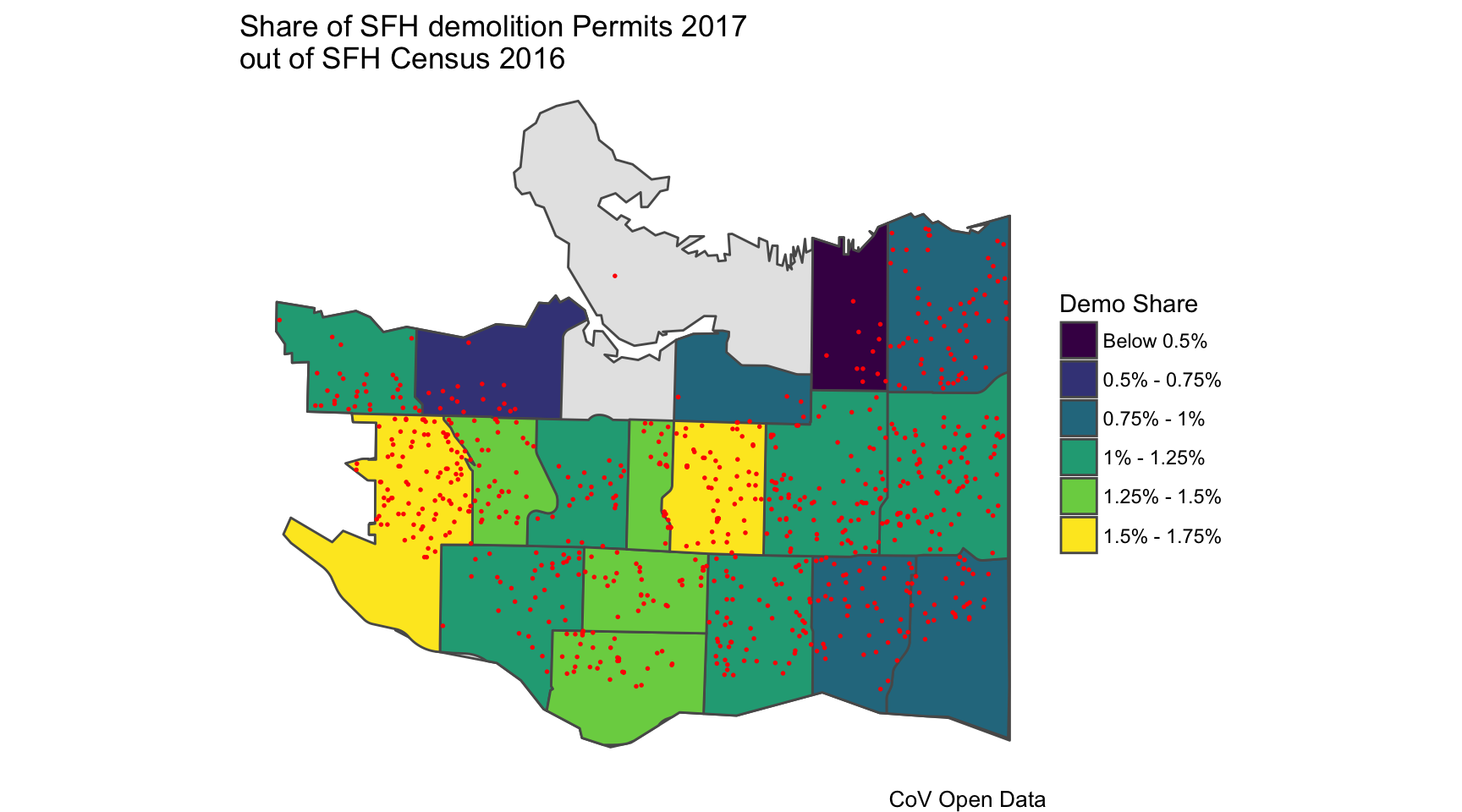 The City of Vancouver has put up building permit data yesterday, and Aaron Licker swiftly took a look at the data and teased out some interesting bits.

@VanOpenData @vb_jens @LausterNa Thanks CoV for the new building and demo permit data. There is clearly a pattern with regards to the pace of residential (re)development (ie demolitions) in the City pic.twitter.com/TMdex1OkIc

We have been asking for this data for quite a while, so we had to take a look too. We wrapped the nasty download, geocoding and general data wrangling into convenience functions, so importing the data into a tidy data frame is pretty simple now. The complete code that made this post is, as always, available on GitHub. 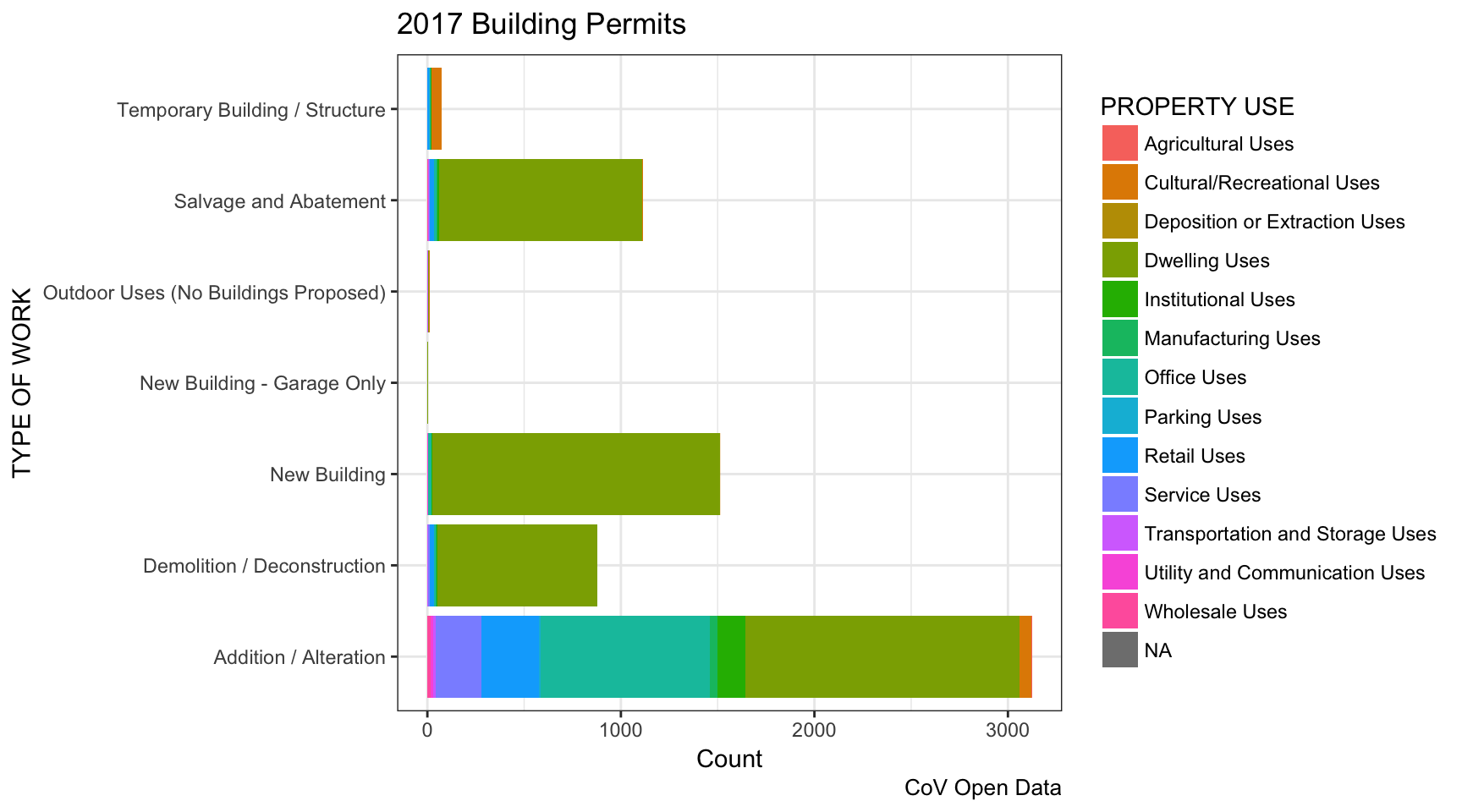 Looks pretty good. Following Aaron’s footsteps we take a closer look at Demolitions. And throw in Abatements too. Which leads us to our first question. Where are we going with this? What we are really interested in is understanding teardowns, we have had a long fascination with that topic, in fact the first post on this blog was in interactive teardown predictor map, that we have since greatly improved, worked into an interactive data story and further extended by using this to understand the trade offs of embodied vs operating carbon in Vancouver’s Single Family Zoning.

When working on understanding teardowns we tried to obtain demolition data from the City, but were unsuccessful. So we used new buildings as a proxy, while having to be aware that there were a couple of greenfield developments in our time frame (Hello Deering Island!) where new builts may not have been preceded by a teardown. This new dataset adds that missing link, but right now it is only available for 2017 onward.

In short, what this dataset adds is that it narrows time frames, gives an earlier indication of what might happen and adds some detail that is otherwise not publicly available, like if a new building or a teardown come with permitted suites and for what lots laneway house permits were issues. 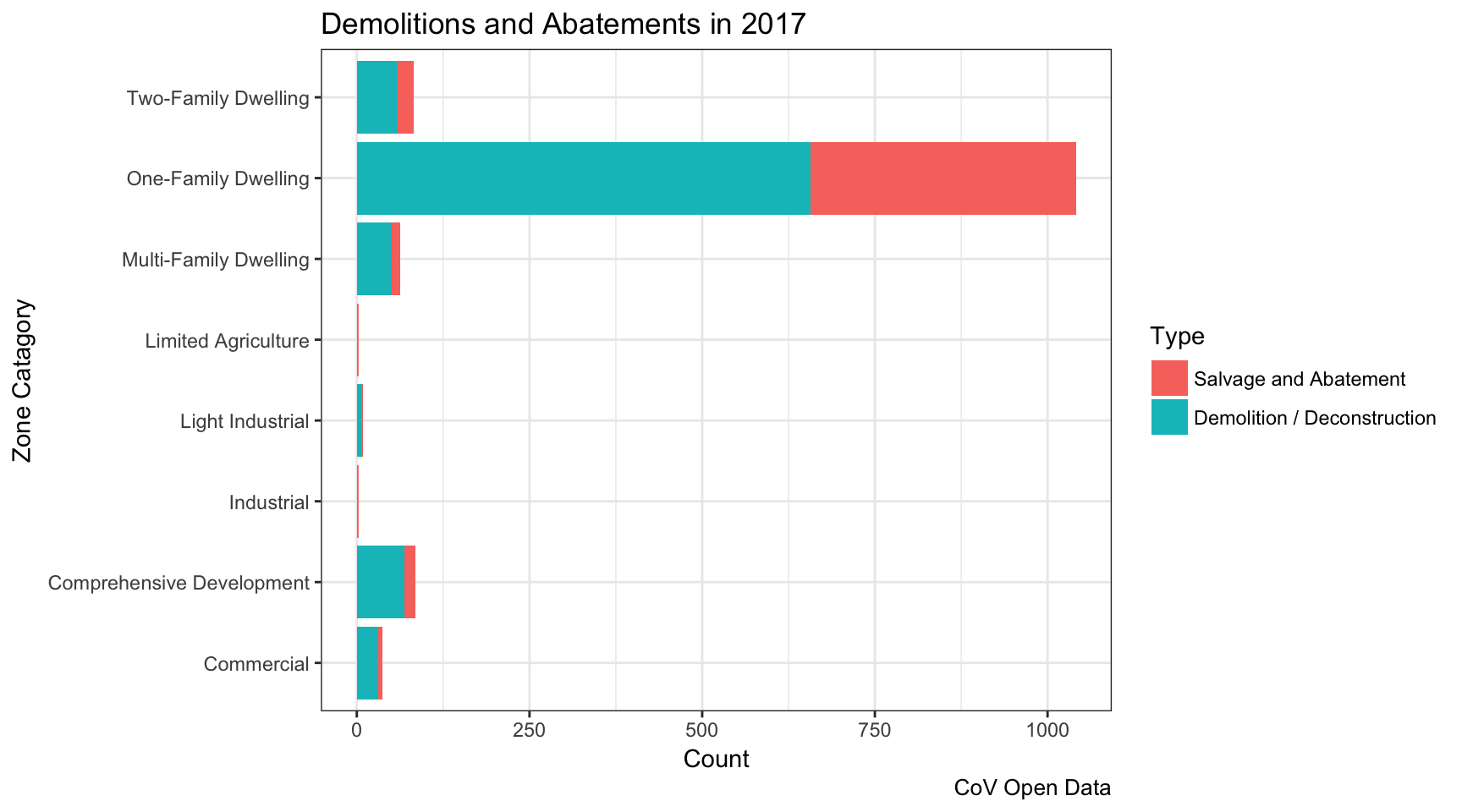 The geographic distributions shows that demolitions are concentrated in the Single Family (RS) neighbourhoods. 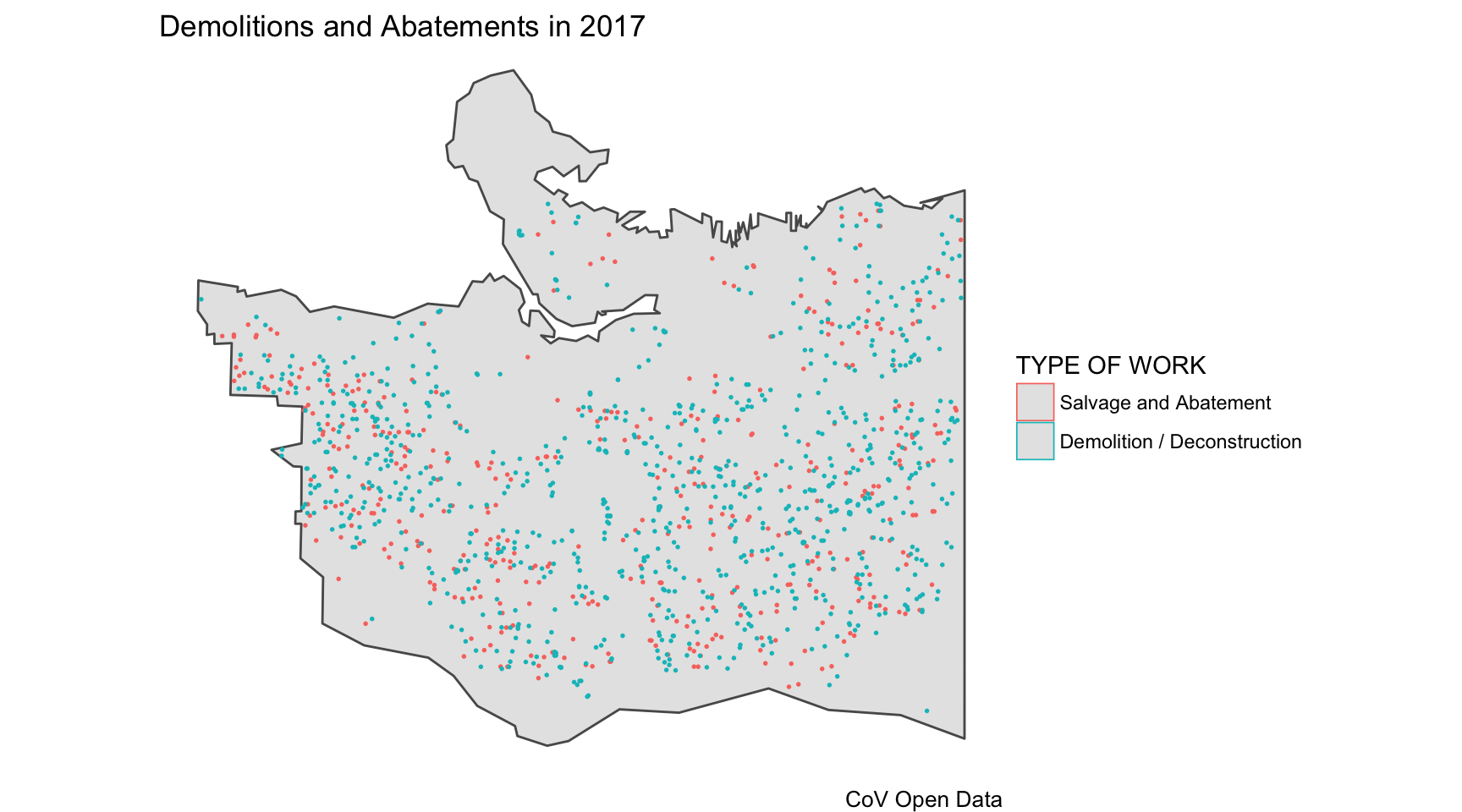 We narrow down our focus to these areas and look at what kind of buildings get torn down or abated. 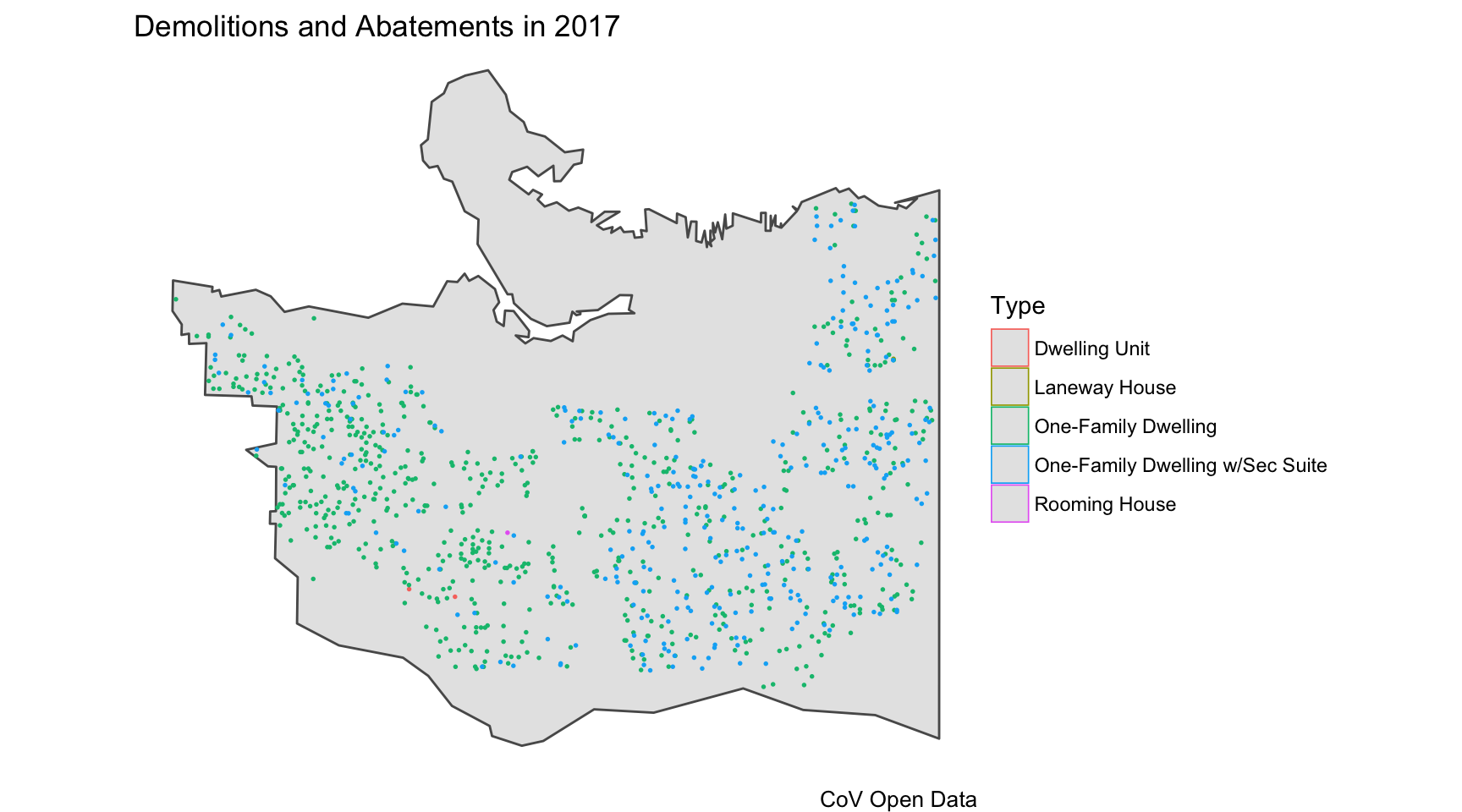 To better understand the change in the building stock we want to look at the overall count in permits in more detail. 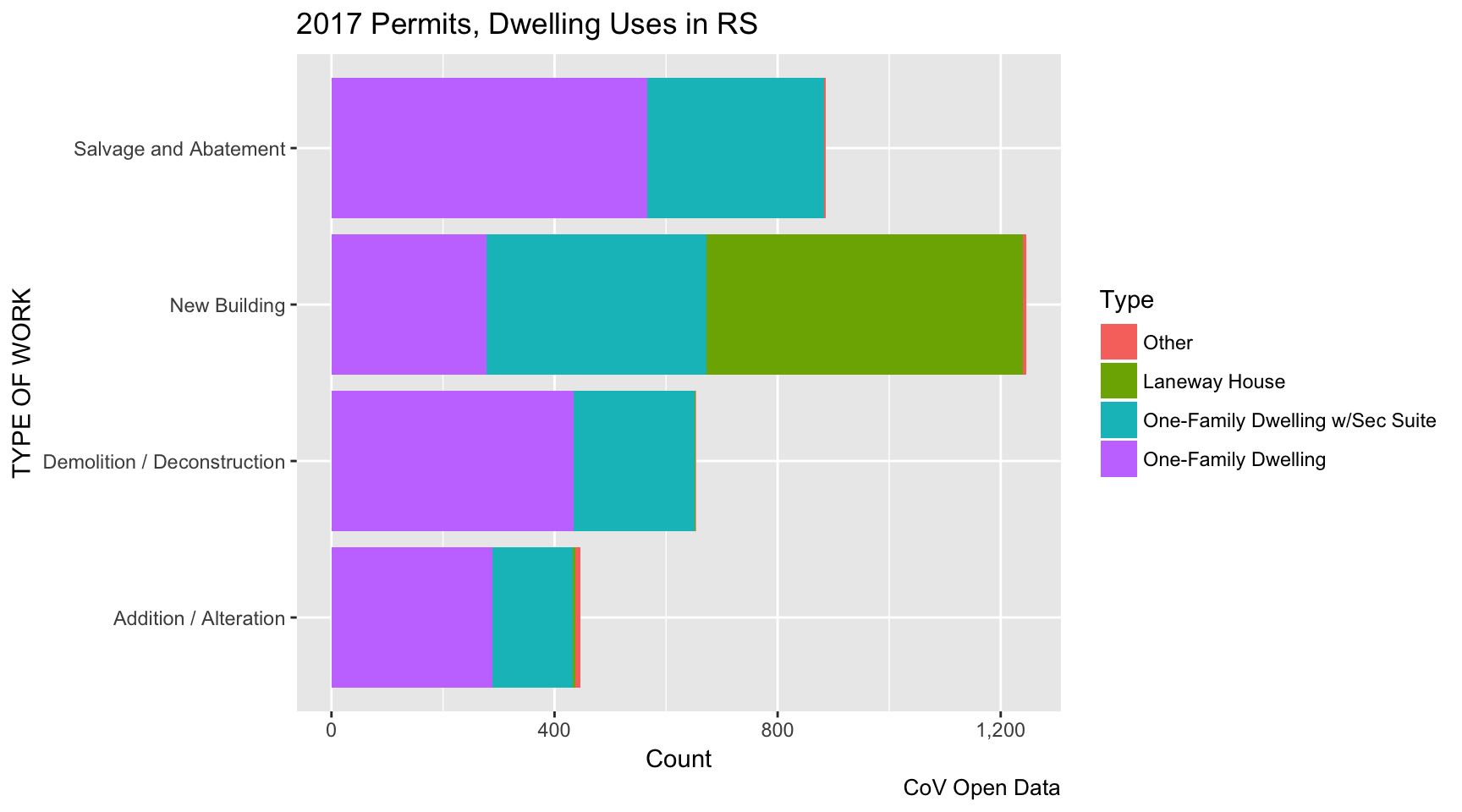 Estimating secondary suites relies on exploiting the different ways to count housing units between BC Assessment and the census. BC Assessment counts properties, so for our purposes lots with single family homes on them. For us that means lots with either a single detached house, or ones with a single detached house with a permitted suite on them. There are roughly 75k of these in Vancouver.

This exercise shows us that we are likely demolishing more suites than the permit data suggests, with the difference being made up by permitted suites. But it also shows that the number of suites is likely still growing in the City as the share of new single family homes with suites is significantly higher. But as we have explained in detail before suites are a strange part of our dwelling stock that end up registering as unoccupied at a higher rate than any other building type in Vancouver. So it takes more work to understand if and how much new dwelling units for people to live in this sizable construction activity in Single Family land actually produces.

As Aaron has pointed out before, this construction activity comes with a high cumulative price tag. 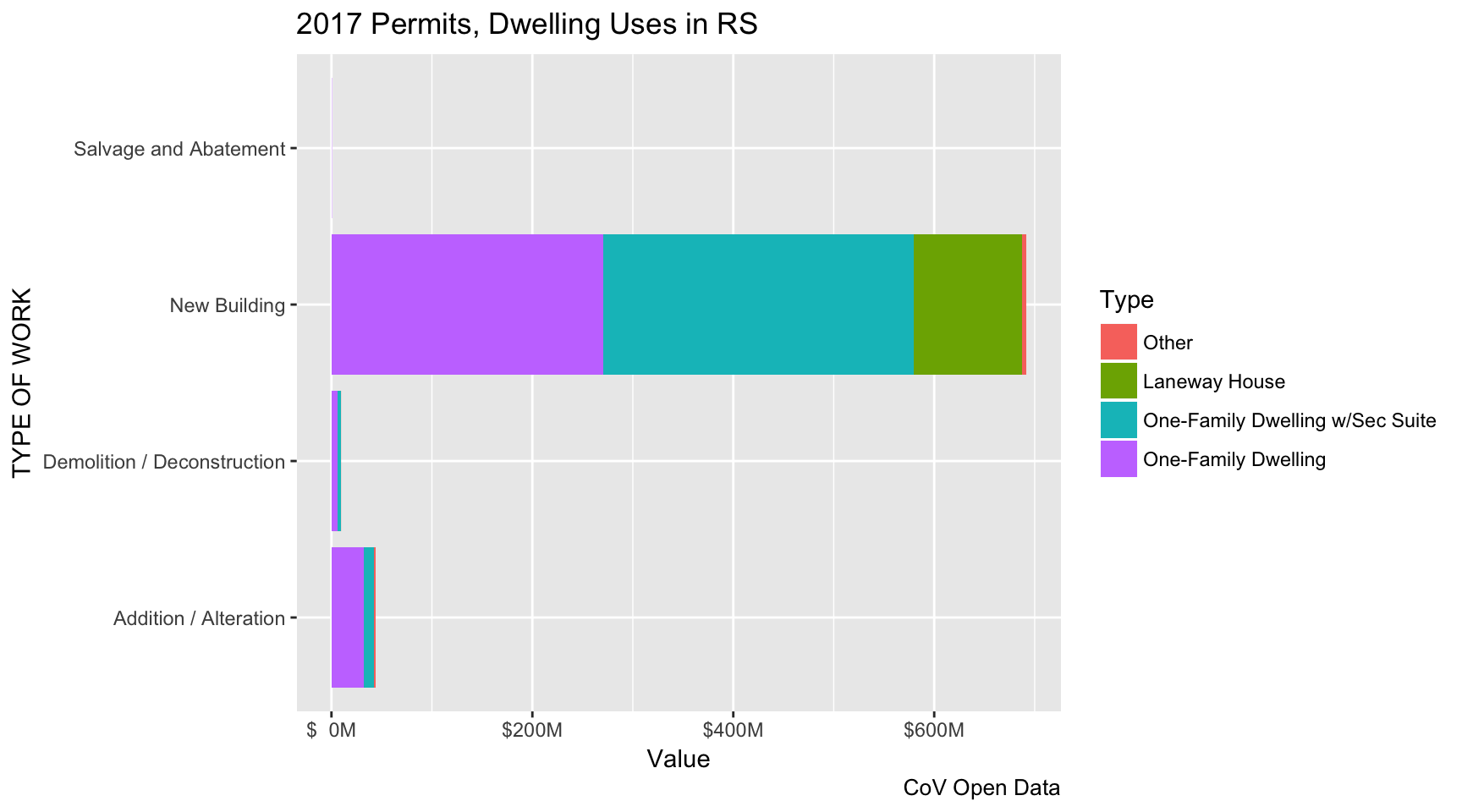 If we look at demolition, abatement and additions for Single Detached and Suited Single Detached throughout the city (not just in RS) in 2017 the total permit value adds up to $673,952,171, while adding very few units to live in.

Another way to look at the data is to follow Aaron’s lead and compare demolitions to the existing building stock. We will take CoV neighbourhoods as our base geography and only look at Single Family lots. For the census we restrict ourselves to occupied units for convenience since the CoV custom tabulation did not pull information on the total building stock. From that we estimate the number of SFH lots in each region by taking the number of single-detached units plus half the number of duplex units. As we have explained above, that’s only a rough estimate and could be off by a bit in either direction, but it’s good enough for our purposes. We will compare this to SFH demolition permit data.

Interested in taking this further or explore different aspects of the data? The complete code that made this post is available on GitHub, just grab it and modify as you see fit.