Today the new CMHC Rental Market Survey data came out, which is a good opportunity to refine my musings on the rental vacancy rate and rent increases. I view this as the renter version of the relationship between months of inventory and changes in resale prices in the for sale market.

CMHC surveys purpose-built (market) rental apartments every October and reports on a variety of metrics, including statistics about the total stock, median and average rents, vacancy rates, and fixed-sample average rent change among others. I have grown quite font of the fixed-sample rent change metric, because it naturally lends itself to use in analysis. Fixed sample rent change keeps the rental buildings used for comparison fixed from one year to the next, so it is not polluted by changes in composition when a new building comes online or an old one gets torn down. In that sense, it’s the Case-Shiller metric for rents, with the caveat that in rent-controlled environments the change in rent may be capped, although in Canada rents are usually constrained at turnover (vacancy decontrol).

A point that sometimes get forgotten is that the CMHC purpose-built stock only includes market rentals (modulo messy details on data collection and classification), so subsidized rentals are generally not included in this.

To start off, let’s look at the purpose-built rental stock in Canada. 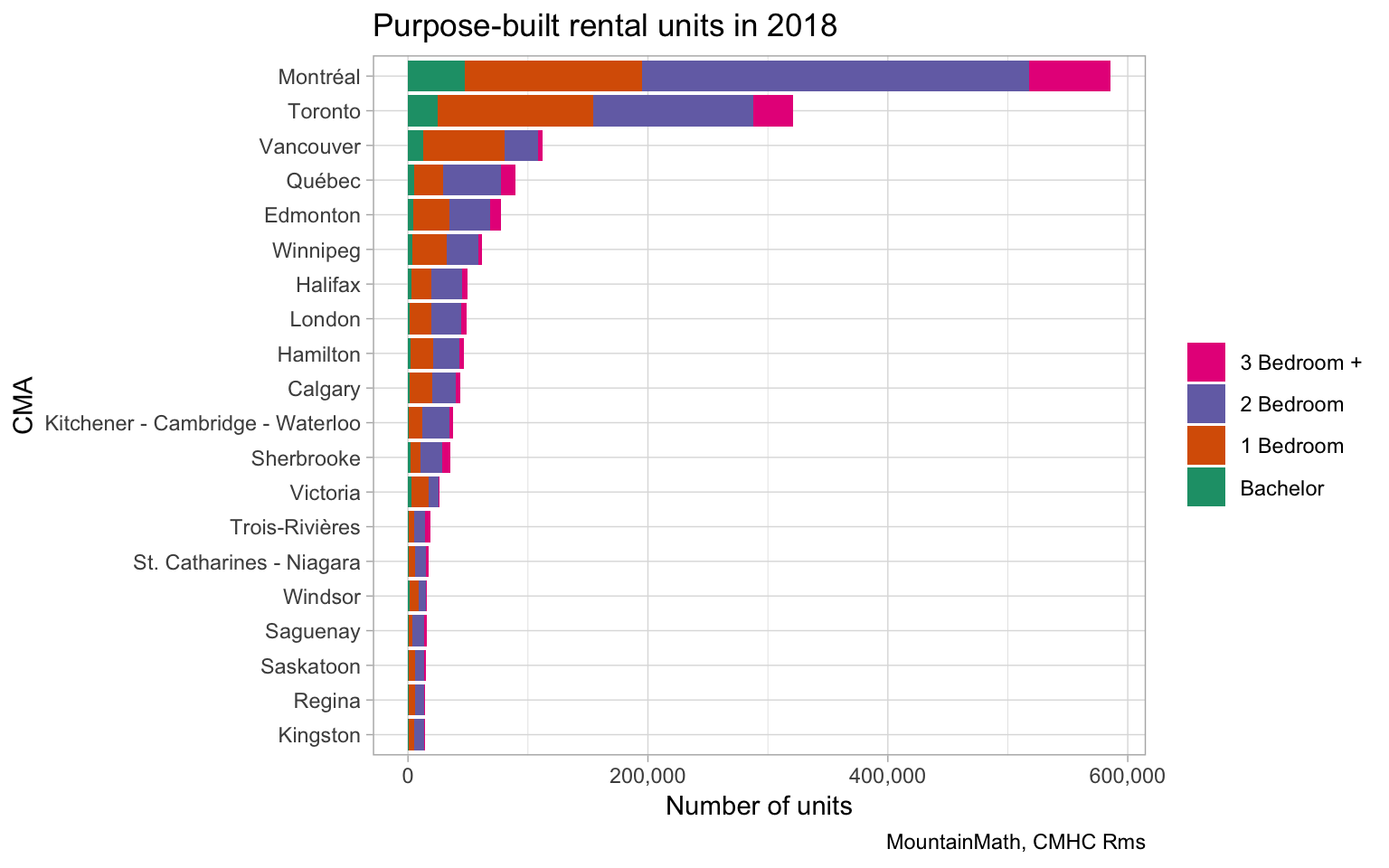 The list of CMAs with the largest purpose-built rental stock is naturally dominated by larger cities, but we immediately notice that the ordering does not correspond to population. Nor to the number or share of renter households in each city. The following graph relates the size of the purpose-built rental stock to the number of renters in each area. 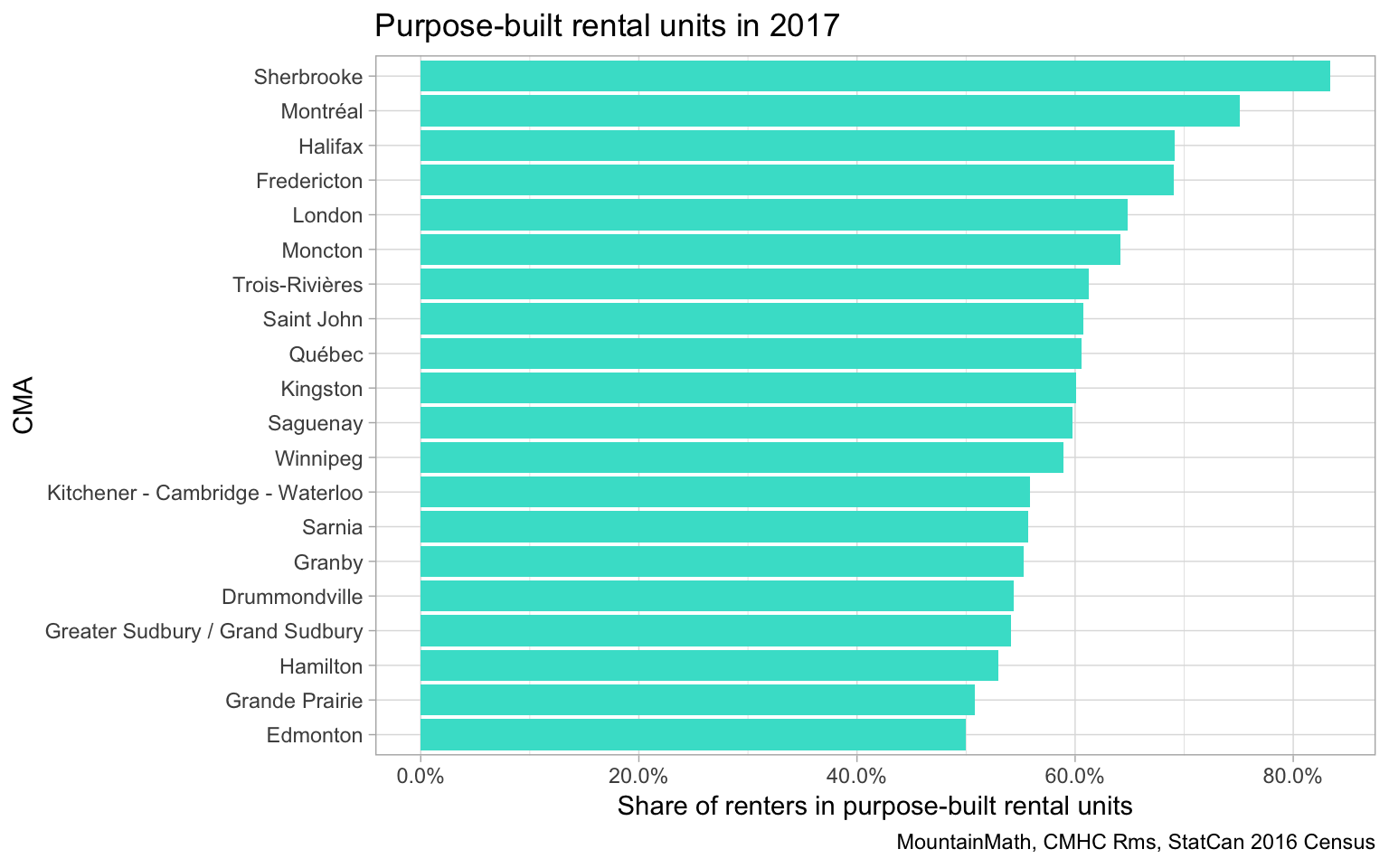 Sliced this way, we notice a lot of smaller CMAs dominating the list, but some larger CMAs, in particular Montréal, also feature prominently. For comparison, here is how the shares look for the CMAs with the largest stock. 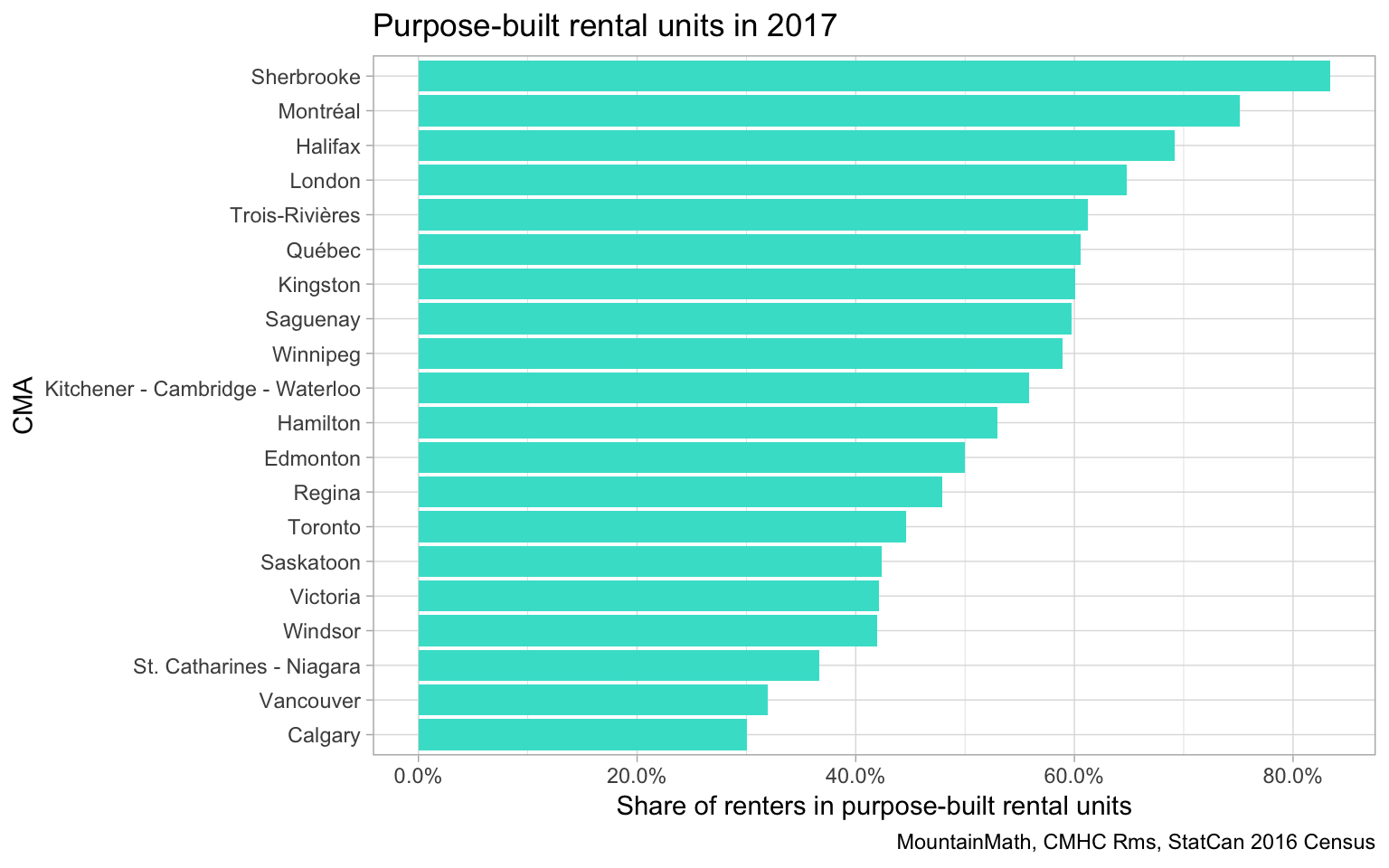 With a renewed focus on renters and public discussions about rent control, this graph highlights the relationship of the vacancy rate to inflation adjusted fixed-sample rent changes in market purpose-built rental units.

But nailing down causality is tricky, especially when we only have annual data when the timeframe of effects is likely shorter. One way to start exploring causality further is to understand the relative timing of the two time series. For this we consider lagged correlations, where we correlate time-shifted time series. 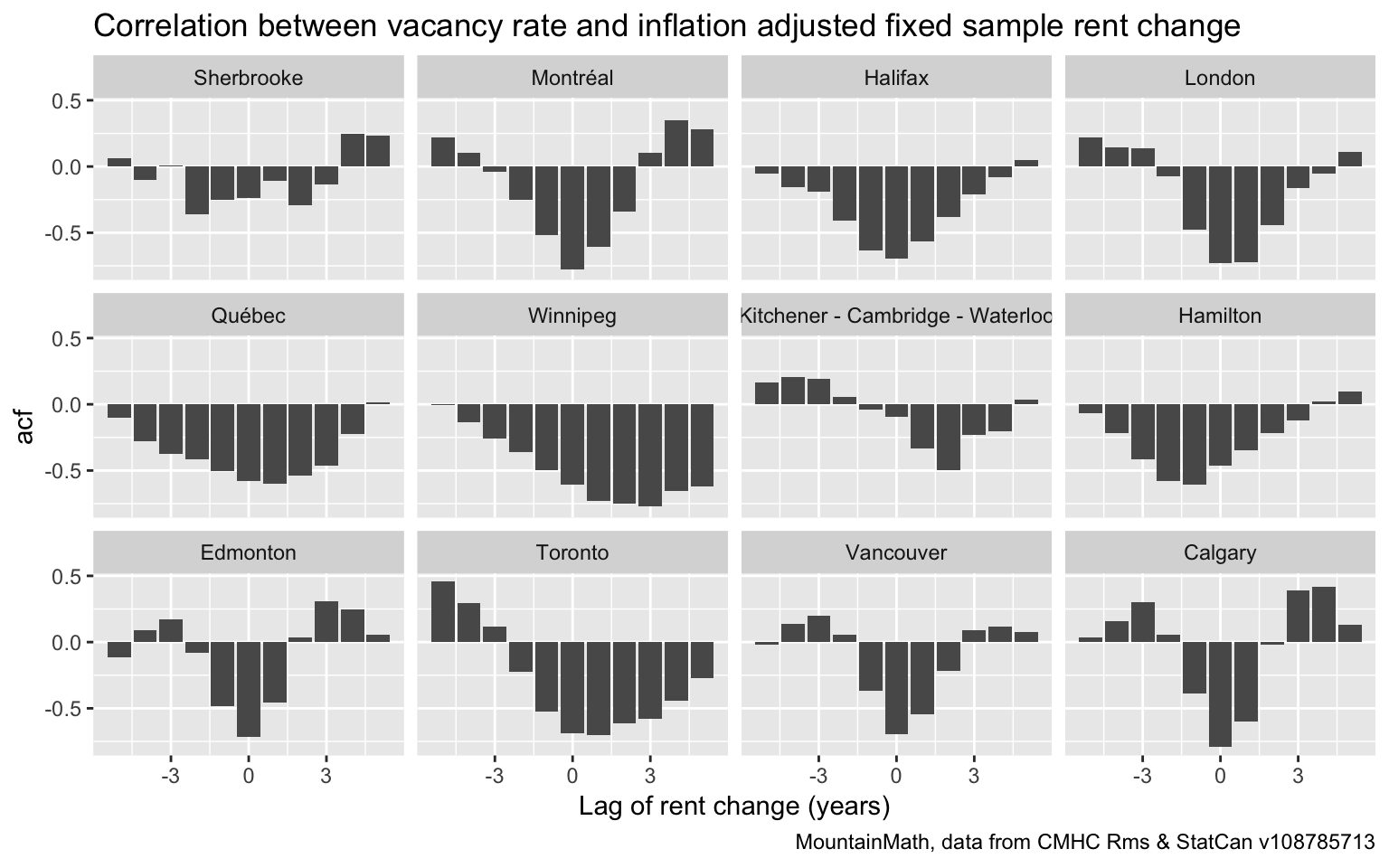 In the cases of Winnipeg and Waterloo the lag seems unplausably large, in Sherprook the correlation looks quite weak, and in Hamilton it appears that rent changes lead the vacancy rate, possibly because the Hamilton market does not operate in isolation. Given the temporal resolution of the data there is not much more we can do here, but overall the lagged correlations support our hypothesis of vacancy rates driving fixed-sample rent changes.

The rest of the rental supply

So far we have only talked about purpose-built market rentals. The main reason for this is that we have longer time lines and better quality data for purpose-built rental, and the idea is that purpose-built and “artisanal rentals” are fungible, so there should not be too much of a different. But in e.g. Vancouver that’s only a small fraction of the rental market. How representative is this really?

To understand that, we start by comparing the purpose-built vacancy rate to the condo vacancy rate. 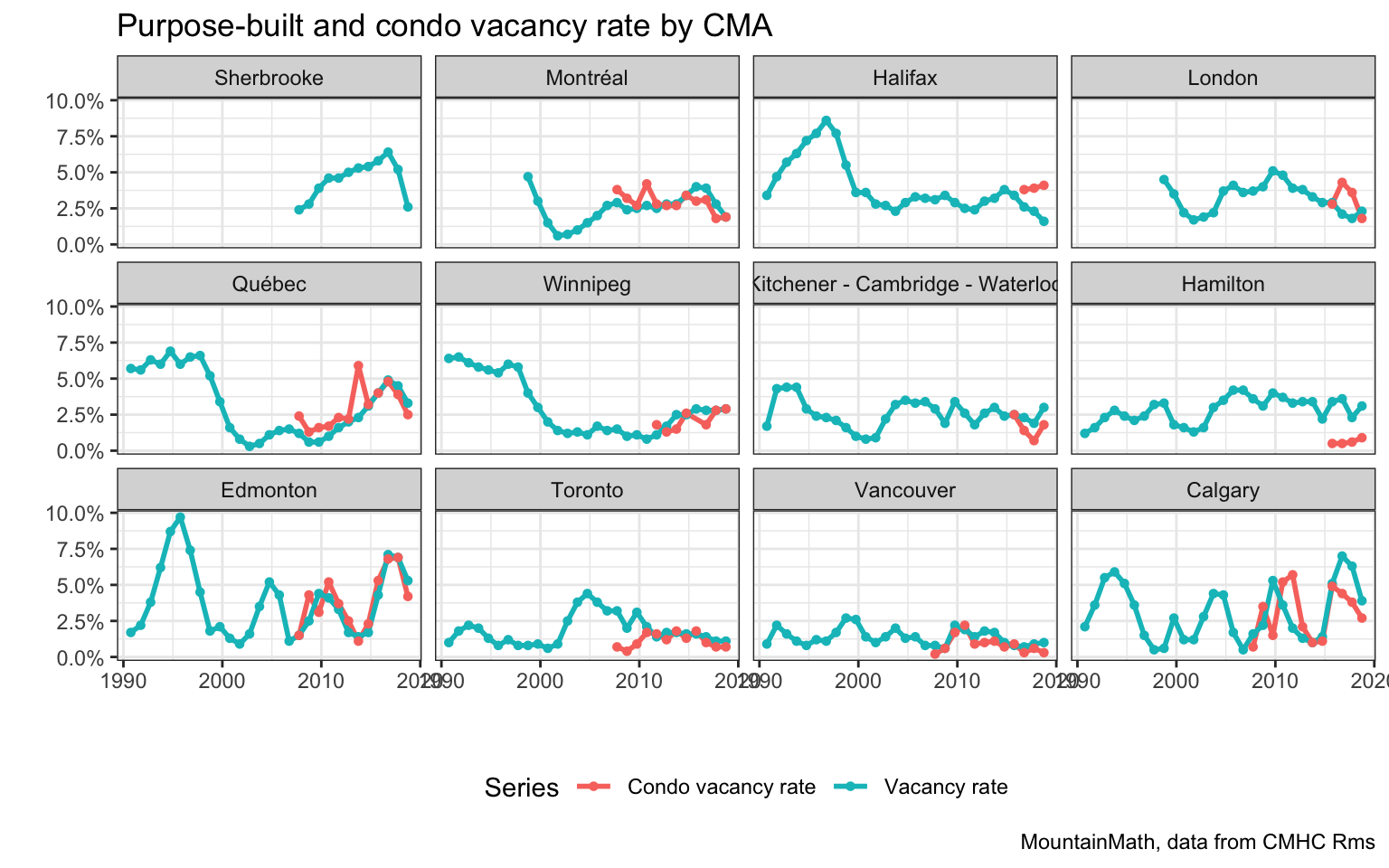 We have much shorter time lines for the condo vacancy rate, but the two track fairly well. Next, let’s look at rents. For “artisanal” rentals, we don’t have the luxury of a fixed sample rent change series, so we use the year over year change in average rent to stand in. 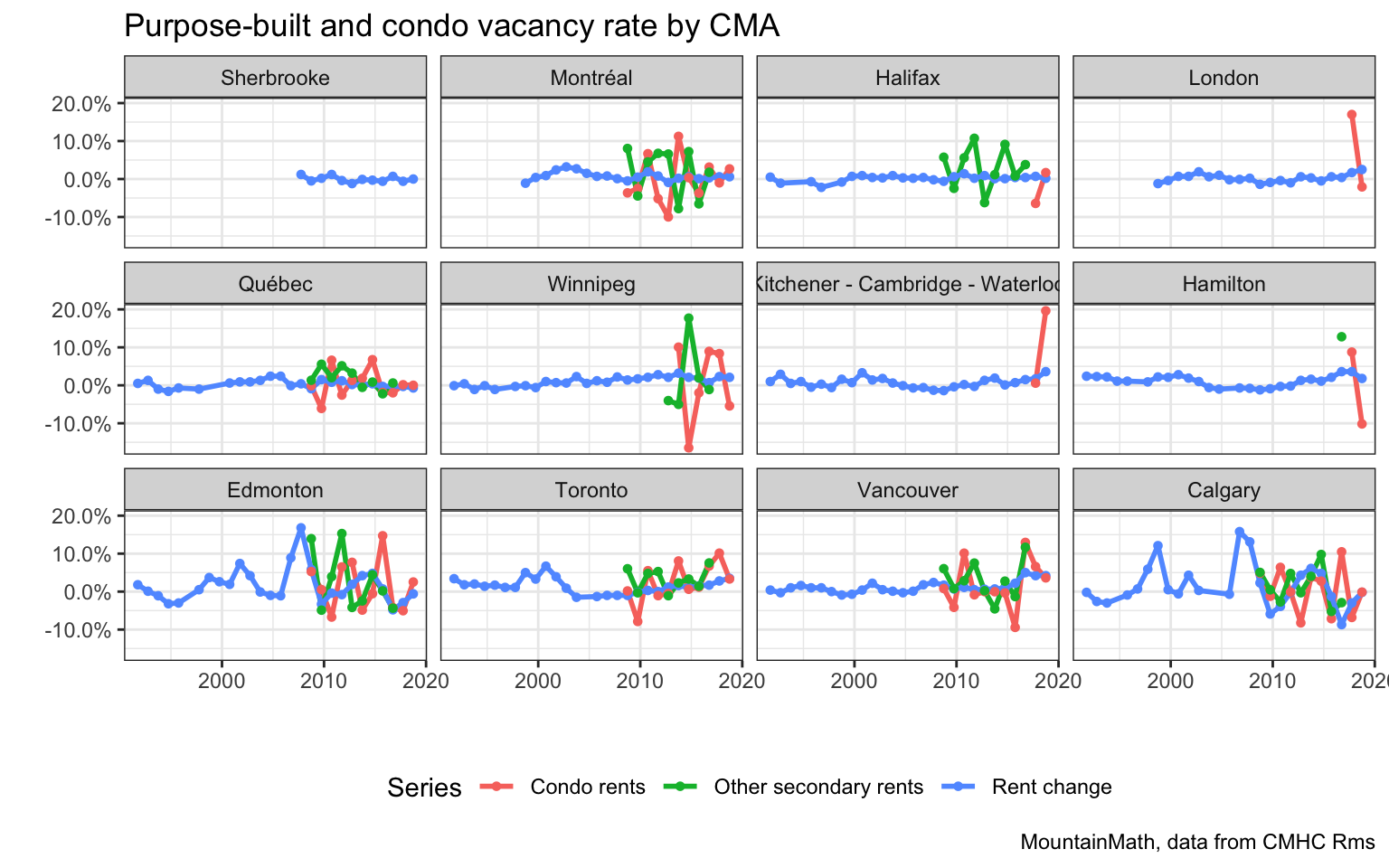 And looking at the data, it’s a real mess. The high volatility in the graphs suggest poor data quality, and the quality indicators provided by CMHC. In Vancouver for example, only the latest two points in the Series come with an uncertainty below 2 percentage points. Probably not too much useful can be learned from this.

One could pull census data to try and understand rents in “artisanal” setting better, but they are only available every 5 years. And the census only allows to filter by condominium units since 2011.

As always, the code for the analysis is available on GitHub for anyone to reproduce, adapt or appropriate for their own purposes.