Cities like Vancouver and Toronto talk a lot about unoccupied dwellings. We have a whole category for empty homes themed posts on this blog. Do we need one more? Probably not, except that we were able to open up an empty-homes related cross-tabulation that we needed through current work for CMHC. Yay, and big thanks to CMHC for making this available to the general public. Open data FTW!

Given how important housing has become, and how much interest unoccupied dwellings has been gathering across Canada, we want to quickly introduce the dataset, show how to access it via CensusMapper for mapping and via the CensusMapper APIs and through cancensus for analysis.

This data is available for census tracts, census subdivisions, census metropolitan areas, census divisions, provinces and territories and the whole country. For the census years 2001, 2006, 2011, and 2016. Others have similar cross tabulations, and we have worked with similar data before. But we have not seen an open data version that can be freely shared, nor a version that covers all of Canada for all these census years.

Just start a new map, the cross-tab will appear below the regular census variables.

Same way as for CensusMapper maps, the xtab variables can be selected from the variable list in the CensusMapper API GUI helper.

The new xtabs have been added to the publicly available datasets via the cancensus package. We will keep the code visible for this post instead of just linking to it on GitHub.

We can explore the variables as usual by listing or searching through them.

Let’s look at two use cases of how to access the variables.

Pulling in the data works as before. Note that we still use CA16 as the base dataset. This is the dataset that indicates the geography underlying the data. We could have also specified CA16xSD in this case, but then we won’t be able to access geographic variables. 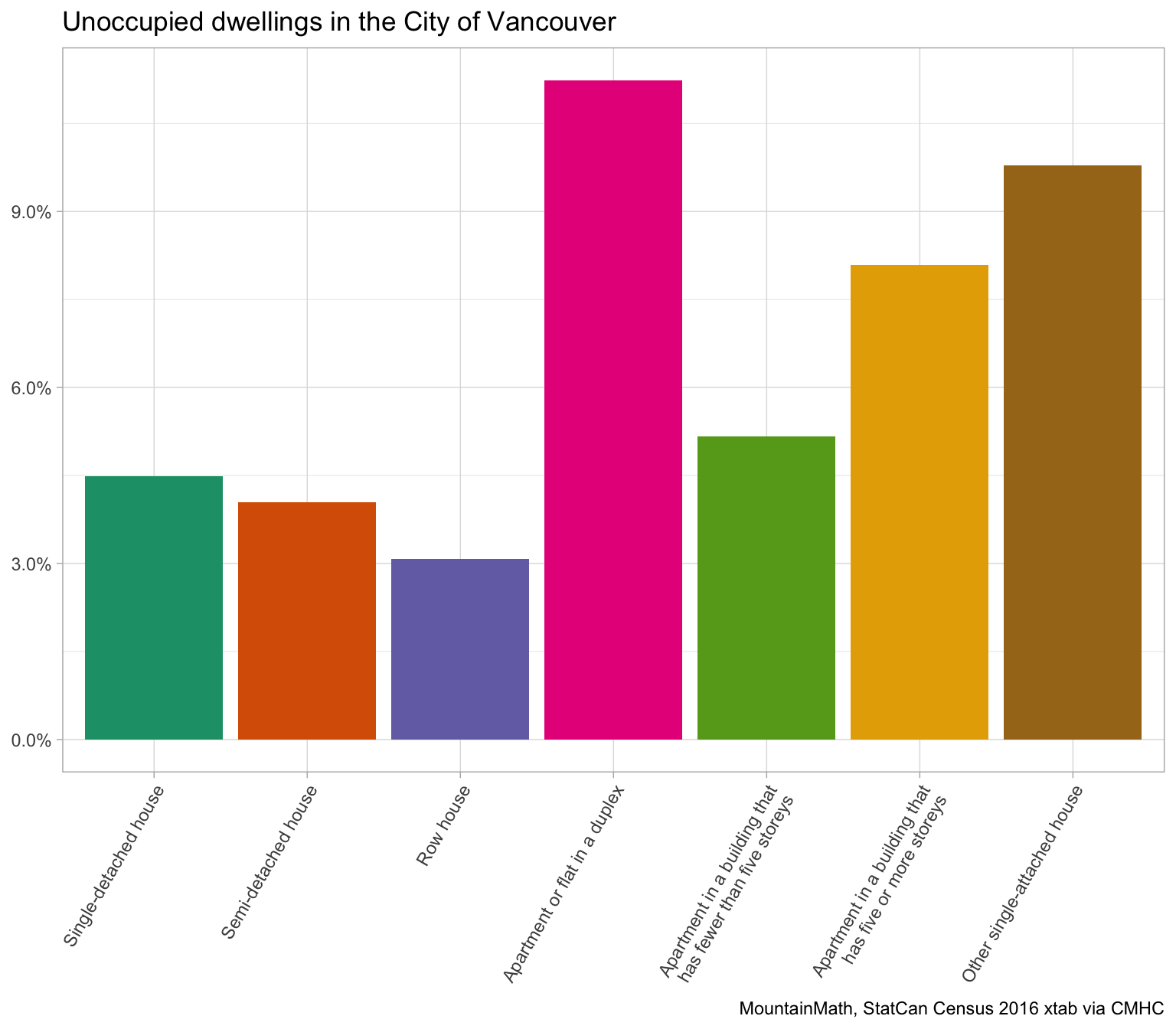 To round this off we map how the geographic distribution of unoccupied dwellings has changed through the census years. Since the selection of variables was uniform across the four censuses we could keep the internal vector identifiers consistent. This simplifies the task of selecting the same variables across censuses. 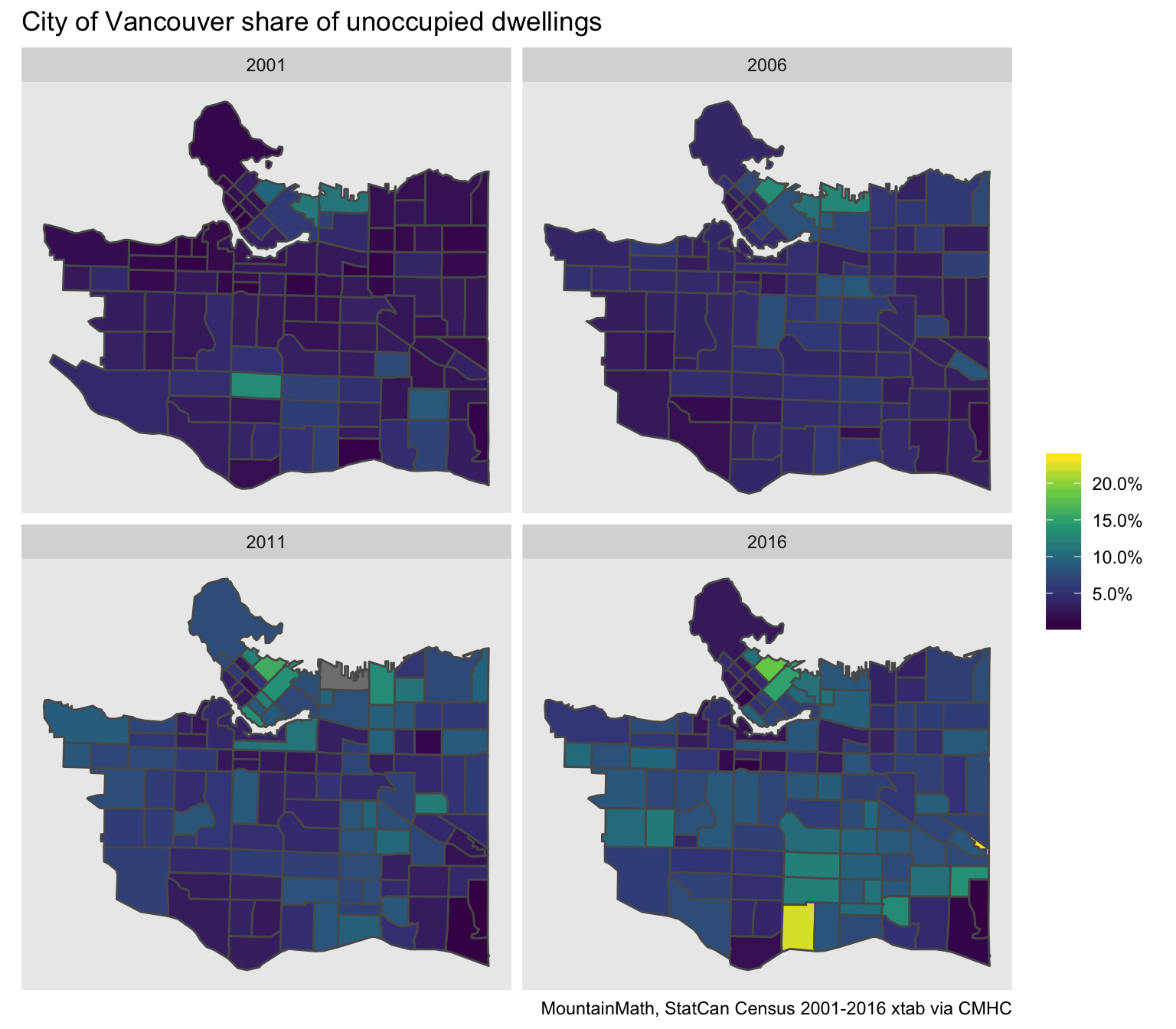 This is probably a good time to remind everyone that Joyce-Collingwood and Marine Gateway had large buildings complete just before census day, resulting in a large number of unoccupied units, which has thrown the press for a loop when the Census data first came out.

And there are many reasons why units may register as unoccupied on census day, some benign and others objectionable, and it requires more work to understand the scope of undesirable vacancies.

That’s it for today. The data does not add much new insight, but it does at least give more accurate accounting of the number of unoccupied units in each region. Maybe that will reduce the number of times people will use dwellings not occupied by usual residents as a proxy for unoccupied units, denying students and other that think of the main residence being elsewhere their place in this city.

More data on housing is generally a good thing, and hopefully opening this up will enable others to dive deeper into the issues. As always, there are numerous caveats to keep in mind when dealing with this data. In particular, the re-classification of dwellings 2001-2006 had a profound impact on overall estimates of unoccupied dwellings. In areas with secondary suites like Vancouver, this re-classification had ripple effects through the other census periods, somewhat muted in 2006-2011 but again clearly visible 2011-2016 as the census discovered more suites. This dataset makes it easier to tack down causes of changes in unoccupied dwellings, this is one of them.

These are just two bigger caveats to keep in mind, in general one will find more quirks to deeper one works with the data. Looking forward to seeing this data getting put to use.