We have previously look at T1FF tax data which is an extremely rich annual administrative data source. The cansim tables have a range of variables to inform about incomes of individuals, families (sliced by number of children, including zero children), low income statistics, and just statistics about the number of taxfilers and dependants by age.

It’s available on cansim for Canada overall, the provinces and CMAs/CAs. That’s great, but sometimes it’s nice to have finer geographic detail. Especially when trying to understand neighbourhood change, census tract level data on incomes and basic demographics is extremely valuable, and is now available on CensusMapper for all years 2000 through 2018 at the census tract level.

When working with data we always need to pay attention to the definitions, and income data is no difference. Income data generally only contains regular income sources, and some income data, like for example capital gains income, is excluded. But capital gains income can be quite sizable, so it’s a good idea to take a more detailed look at it.

Typically people only have sporadic capital gains income, if at all. For that reason it is not included in income statistics, but in aggregate it can have a substantial effect. 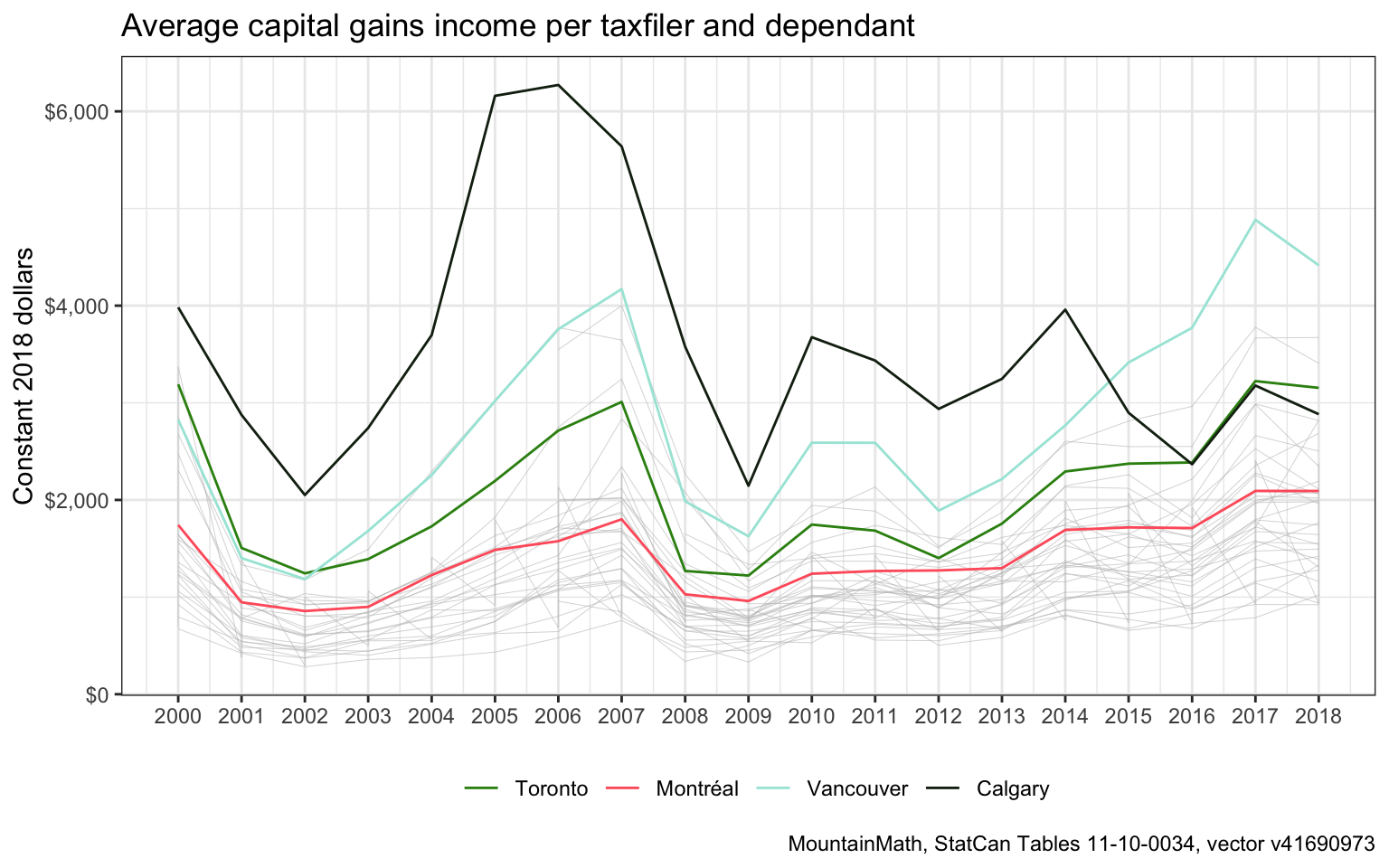 Of note here is that this only includes taxable capital gains, tax-free capital gains from e.g. the sale of a principal residence is not captured in this.

There are some interesting movements, traditionally Toronto saw the highest capital gains relieved per taxfiler, but Vancouver overtook Toronto between 2014 and 2015 and the spread increased in the following years, possibly fuelled by Vancouver’s large real estate gains and boosted by the mandatory declaration of principal residence sales starting in the 2016 tax year which might have increased compliance with taxable capital gains declarations on non-primary residence sales. 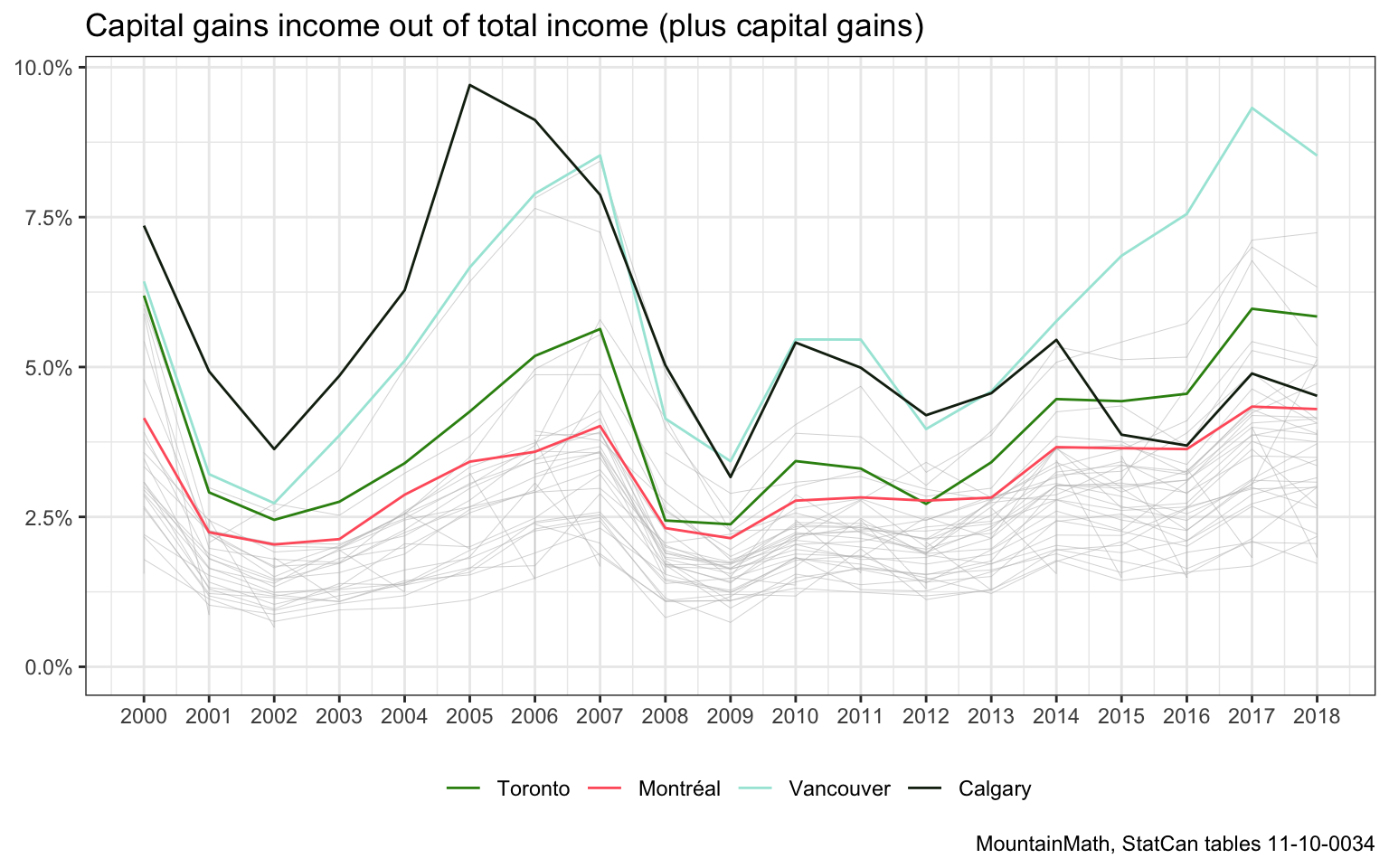 On this metric Vancouver tracked Calgary fairly well until about 2015, when Toronto overtook Calgary and Vancouver made even larger gains.

Only a minority of taxfilers and dependants has capital gains income. 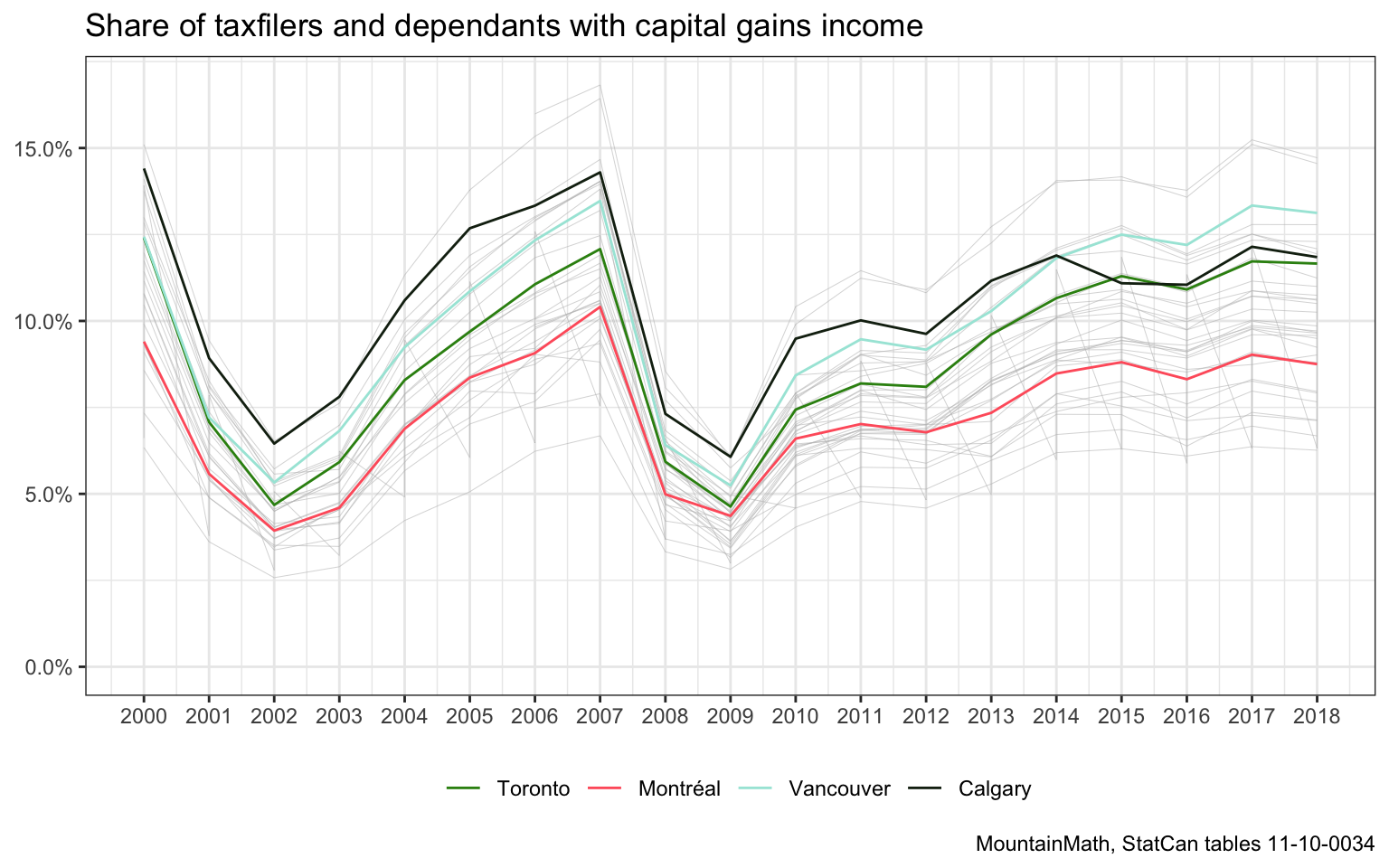 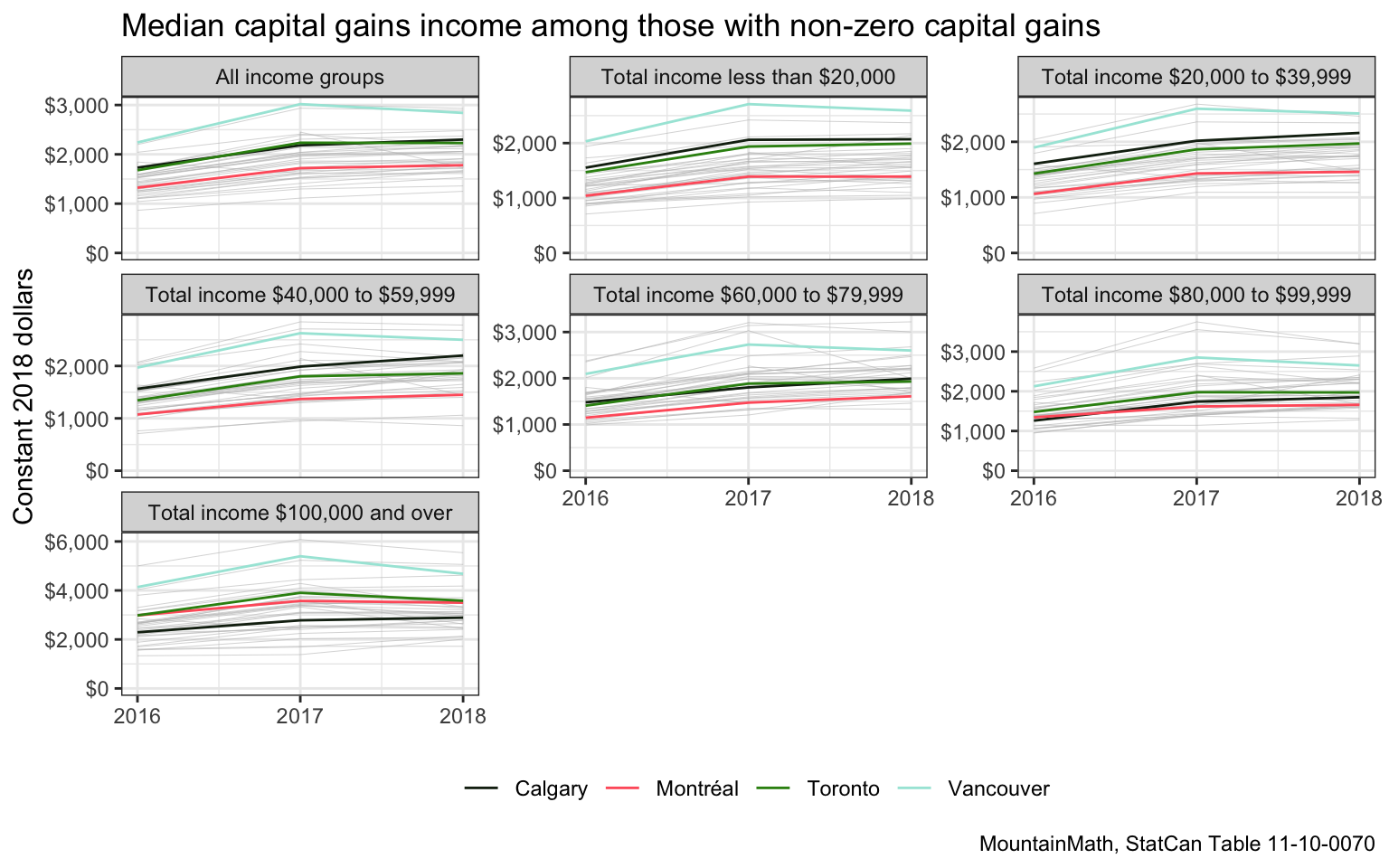 Median capital grains income is surprisingly uniform among income groups below $60k and steps up again at incomes over $100. It’s remarkable that Vancouver has significantly higher capital gains income than the other large metros in all income groups. 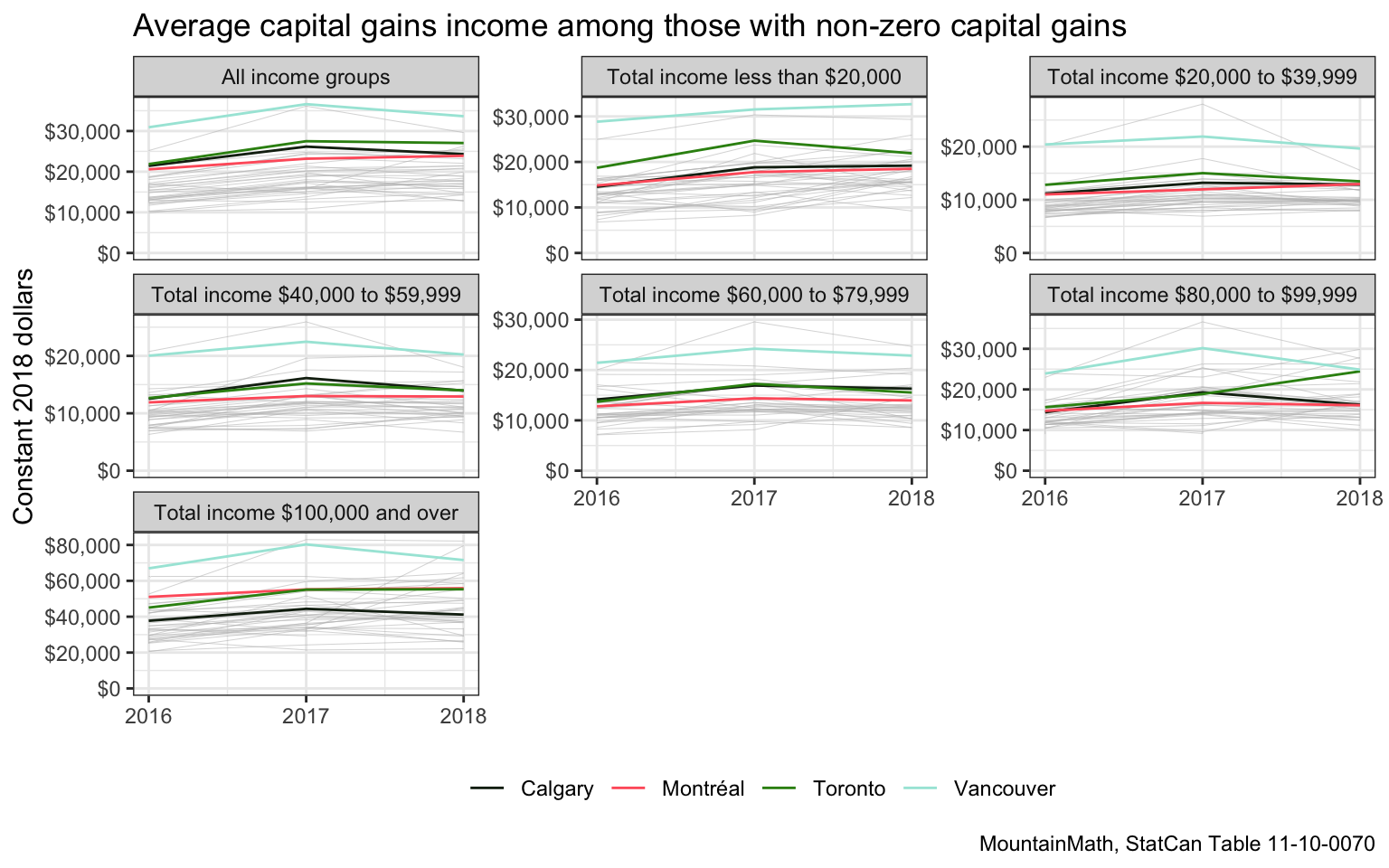 It is striking that Vancouver again leads the larger CMAs in all income groups. 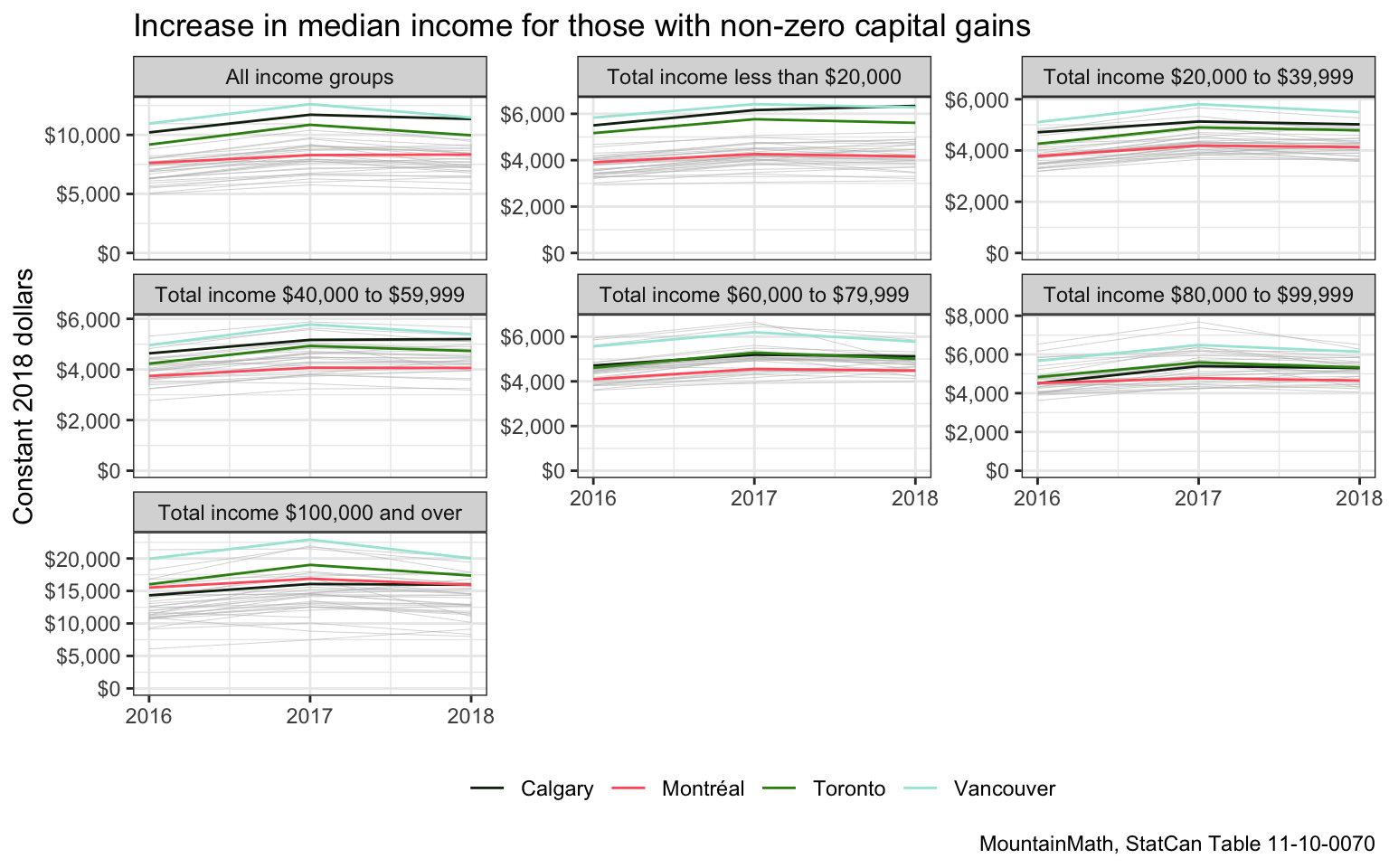 A quick simulation with 10000 people in this tax bracket, fitted to roughly produce the above statistics, can illustrate this nicely. 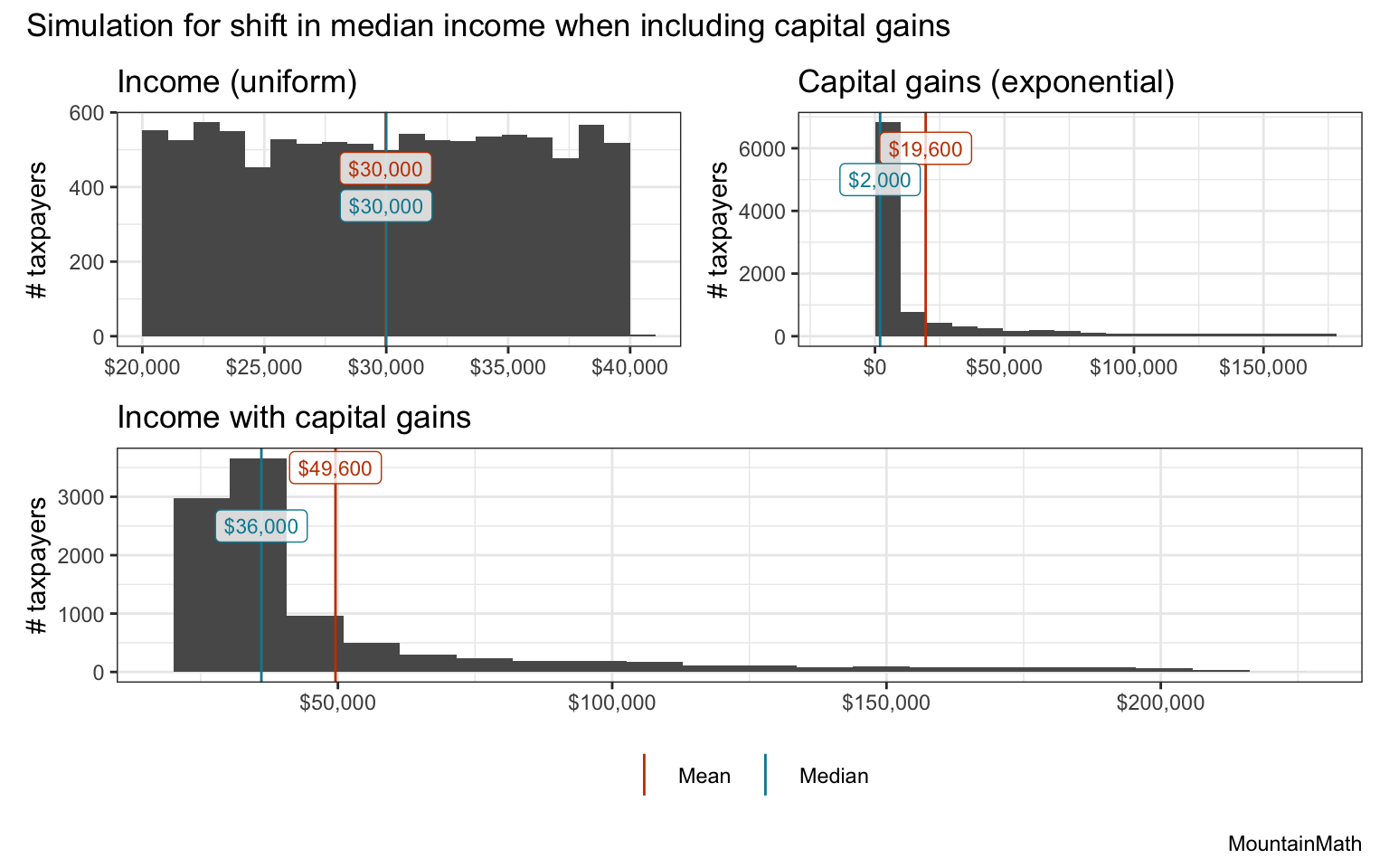 These graphs are a good reminder that some income, like capital gains income, is not captured in income concepts like total income or standard census release data that only count regular income source, but these incomes can still play a significant role in the aggregate money that becomes available to taxfilers. 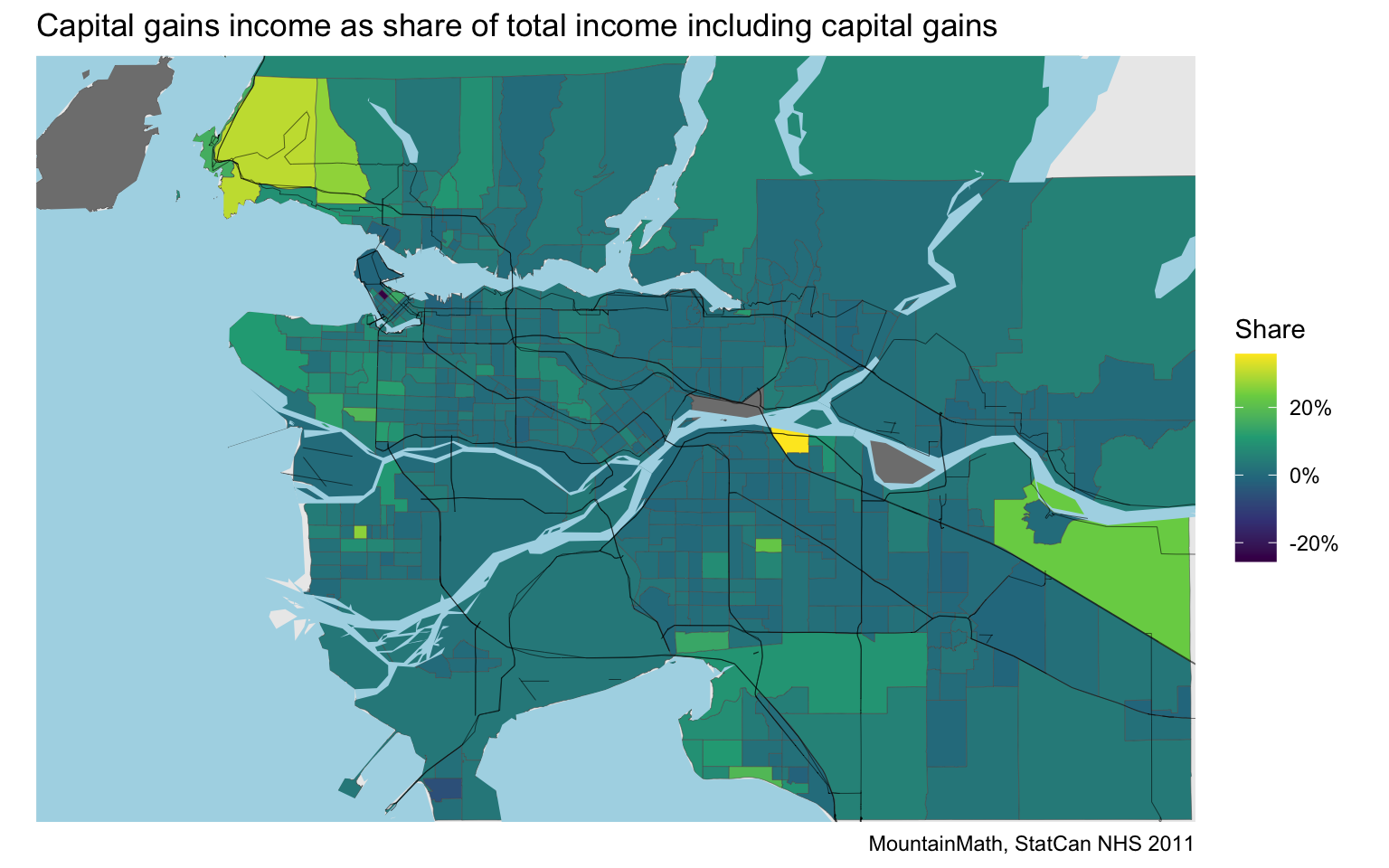 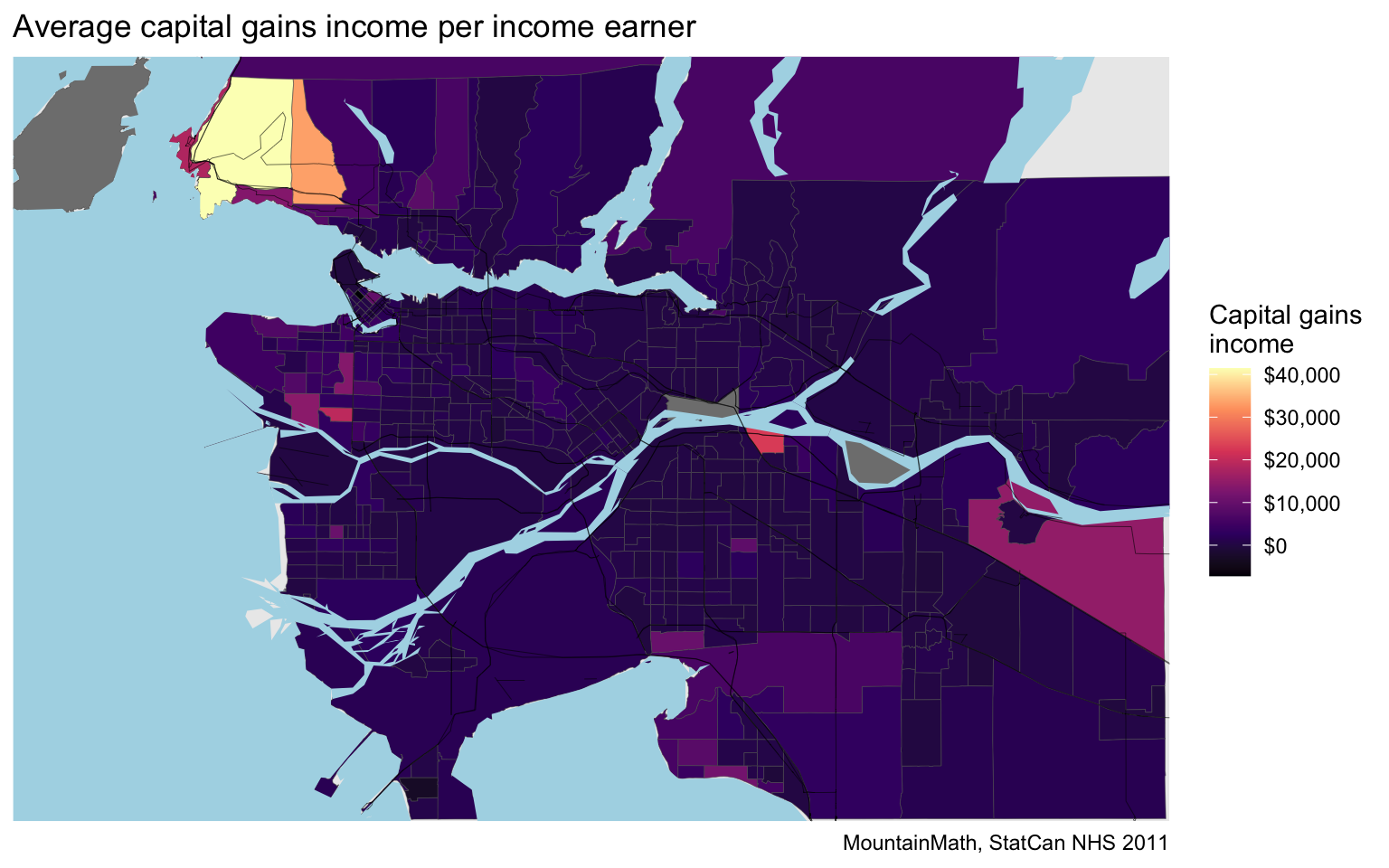 (Taxable) capital gains income is especially prevalent in higher income groups, likely due to the strong (yet imperfect) correlation between income and wealth. And it also shows strong geographic variation, and also varies considerably over time.

This suggests that analysis based on income may need to pay more attention to capital gains income, at least as a cross-check or robustness test. To this end it would be useful to also have census tract level capital gains income. Or even better, start adding “income including (taxable) capital gains” as a standard product in income metrics in StatCan tabkles and census data.

Moreover, I would like to see a longitudinal analysis to identify to what extent taxpayers manage to structure all or most of their income as capital gains, having regular (although possibly volatile) capital gains income (almost) every year. This may well already exist and I would appreciate pointers.

From a policy perspective, capital gains income should get a very close look. Michael Smart recently made a convincing case for a capital gains tax reform.