The city pulls a custom tabulation for city neighbourhood geographies for every census, but that will still take more than year until that arrives. Until then we can use TongFen to get good estimates, just like what we did for our deadbeat zoning post to go down to block level and build a least common denominator geography for the 2016 and 2021 based on the respective dissemination blocks. Then we can categorize the geographies by which neighbourhood they (mostly) fall in. Strictly speaking we are going to look at the City of Vancouver together with Musqueam 2, which is part of the Dunbar-Southlands neighbourhood.

Let’s take a look what that matchup between the (harmonized) dissemination blocks and the city neighbourhoods looks like. 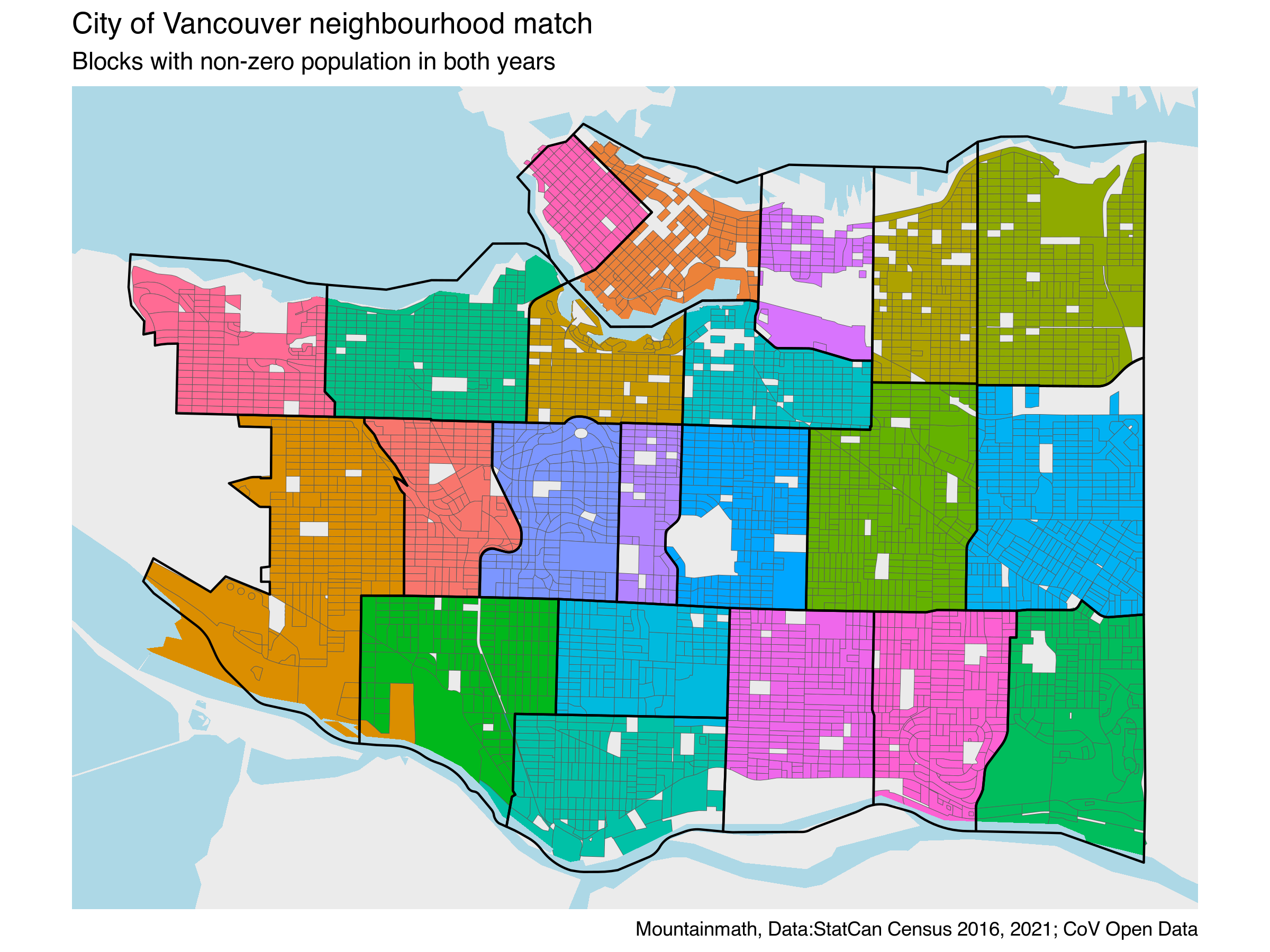 Overall the match is good, with the exception of a small areas of Kerrisdale bleeding into Dunbar-Southlands in this classification. We will ignore this for this post. Part of the advantage of creating the unified geography is that the population in that area will be consistently classified as Dunbar-Southlands for both censuses.

First, let’s look at absolute population change. Which neighbourhood added the most people, and which added the least. 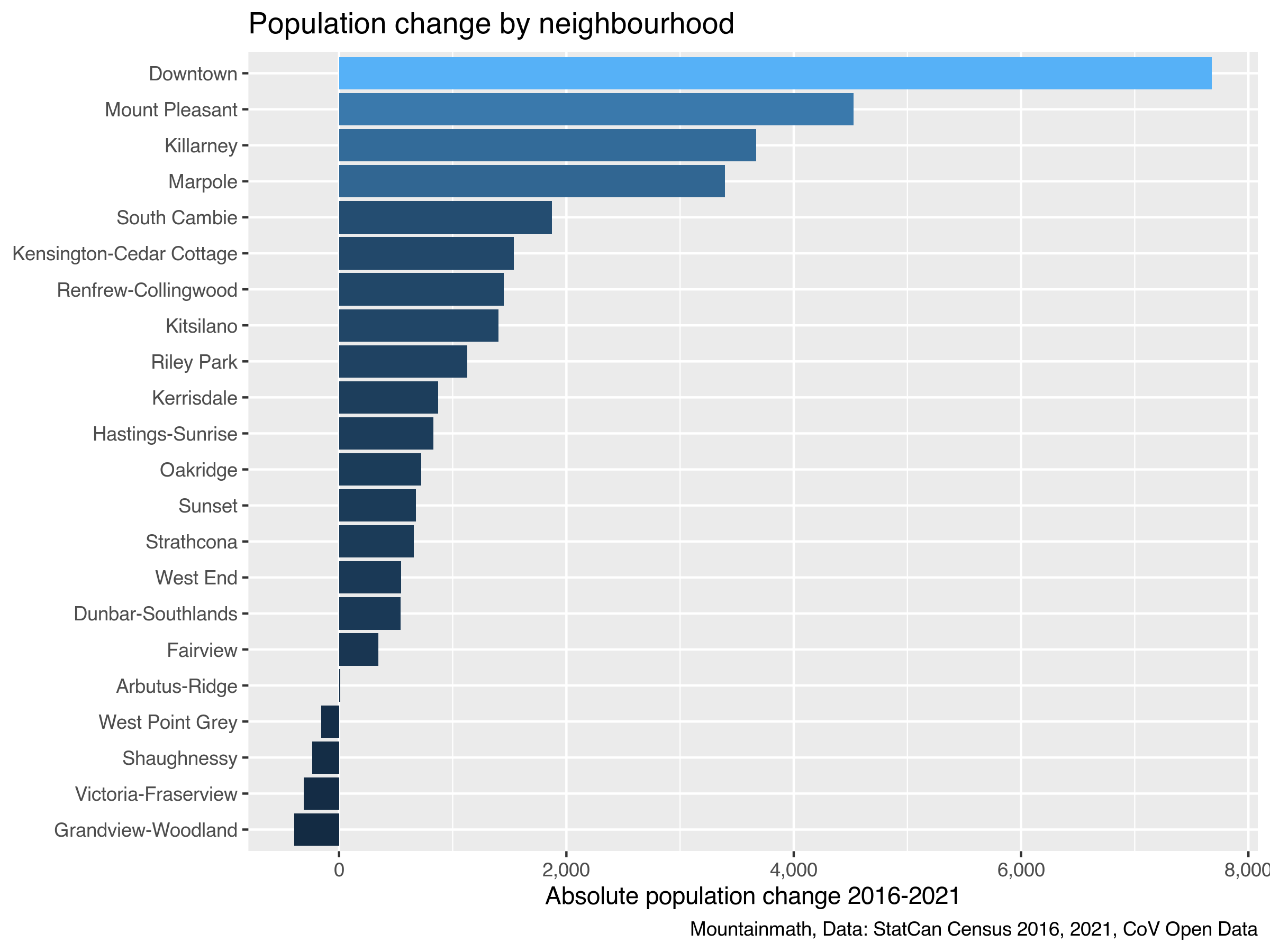 It’s probably not a surprise that Downtown, Mount Pleasant, and Marpole lead the pack. That’s where a lot of the development in this city has been concentrated over this cycle. On the other end of the spectrum we see neighbourhoods with population drops, with the “No Towers” neighbourhood of Grandview-Woodland seeing the highest population drop. In total, the census counted 28 more dwelling units in 2021 compared to 2016 in Grandview-Woodland, not nearly enough to make up for other demographic factors like declining household size.

We don’t have income data yet, but it will be interesting to see the effects of the gentrification pressure on Grandview Woodland resulting from this lack of adding housing. Looking at census tract level taxfiler data that takes us up to 2017 Grandview-Woodland stands out as one of the areas with the highest drop in low-income population and large increase in median income.

That reshuffles things a little, with South Cambie rising to the top where densification along the Cambie Corridor has added significant population to the otherwise fairly low-population neighbourhood. At the bottom end Shaughnessey takes the lead, due to its already quite small starting population.

One useful way to slice the data is to break down the population change into three components:

At this point it’s a bit of a hack because we should be using population in private households instead of overall population, but that data is not yet available and the difference for larger areas like city neighbourhoods won’t be large and we will gloss over this detail. This gives a pretty good idea why population has changed. 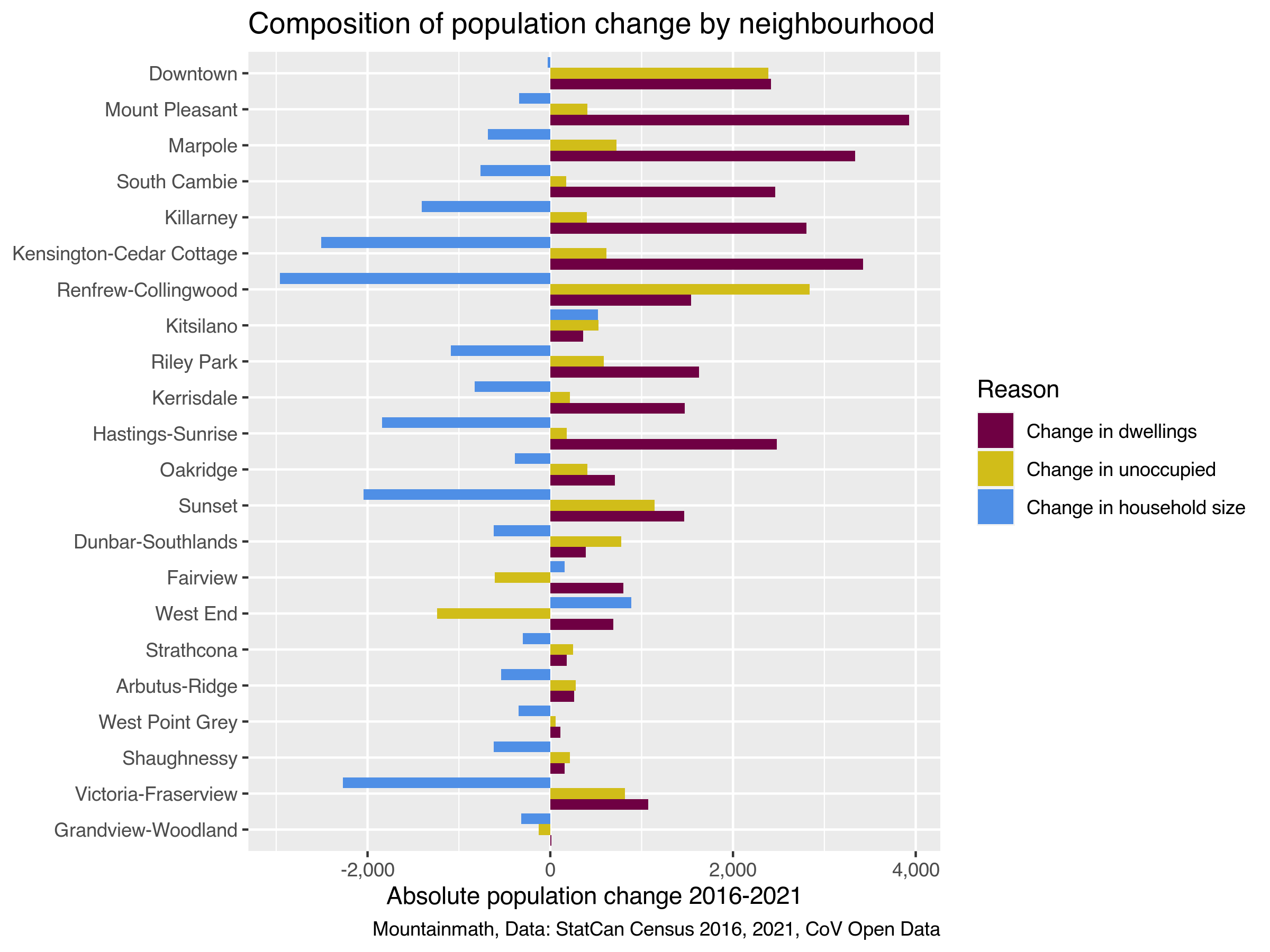 What’s interesting is that the decrease in unoccupied dwellings, and associated increase in population, can be seen across almost all neighbourhoods, with the exception of the West End, Fairview and Grandview-Woodland. While it’s good to remember that this metric is difficult to interpret and outliers in some areas should be expected, it is consistent with the notion that the Empty Homes Tax and Speculation and Vacancy tax had some effect.

We also have an interactive Canada-wide map on CensusMapper showing these components of population change in each region down to the census tract level.

As usual, the code for this post, including the code to scrape the data out of the PDFs, is available on GitHub for anyone to reproduce or adapt.